Energy Transfer is accused of illegally releasing industrial waste at 22 locations in 11 Pennsylvania counties, including Delaware and Chester counties 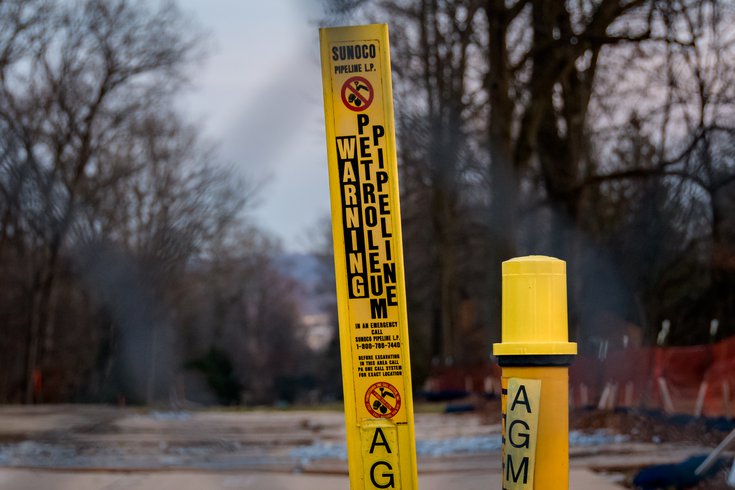 The developer of the Mariner East 2 pipeline is facing criminal charges for allegedly spilling thousands of gallons of drilling fluid underground during the pipeline's construction across southern Pennsylvania. These incidents contaminated drinking-water wells and were never reported to the state's environmental authorities, Pennsylvania Attorney General Josh Shapiro said Tuesday.

Along one Chester County segment of the pipeline alone, it is estimated Energy Transfer's construction operations leaked at least 80,000 gallons of drilling fluid in and around Marsh Creek Lake between 2017 and 2020.

Energy Transfer, which owns Sunoco, is charged with 48 counts of environmental crimes related to the leaks and the company's failure to report them to the Pennsylvania Department of Environmental Protection. Then fluid contained what the attorney general's office described as unapproved additives, and on multiple occasions the industrial waste would surface in fields, backyards, streams, lakes and wetlands.

"There is a duty to protect our air and water, and when companies harm these vital resources through negligence – it is a crime," Pennsylvania Attorney General Josh Shapiro said. "By charging them, we can both seek to hold them criminally accountable and send a clear message to others about how seriously we take protecting the environment and public health."

The Mariner East pipeline transports liquified natural gas from Pennsylvania's Marcellus Shale to the Energy Transport export terminal in Marcus Hook, Delaware County. Construction of the 350-mile-long pipeline cost $2.5 billion and runs through 17 counties in the southern half of Pennsylvania.

Shapiro's office alleges Energy Transfer released the drilling fluid at 22 locations in 11 counties, Chester County and Delaware County among them.

Most of the charges against Energy Transfer originated from a grand jury investigation that recently ended. Members of the grand jury heard residents who live near areas where the spills occurred describe their drinking water as being gray or coffee-colored

One Delaware County resident, Rosemary Fuller, had allowed Energy Transfer to drill on her property. Shortly after she began to notice sediment in her tap water. The sediment destroyed appliances in her home, but Energy Transfer insisted her water was safe.

Testing found the water in Fuller's home had high levels of E. coli and fecal coliform. Fuller's daughter was sickened by the water and hospitalized, prosecutors said. The problem had yet to be resolved as of earlier this year.

At Marsh Creek Lake in Downingtown, Chester County, which served as the backdrop for Shapiro's press conference about the charges on Tuesday, it was  initially estimated that 8,000 gallons of industrial waste had been spilled when the environmental incident first was discovered in August 2020.

A year later, investigators allege at least 10 times that much drilling fluid had been released in the state park during a three year period.

Energy Transfer could face fines and restitution if found guilty of the charges.

The pipeline and Energy Transfer have encountered an array of problems in recent years, including the DEP ordering work to stop in January 2018 and the emergence of a sinkhole in Delaware County in September 2019.

Between May 2017 and November 2018, two of Energy Transfer’s pipelines in Pennsylvania and Ohio – including the Mariner East 2 – racked up more than 800 state and federal violations.

The FBI opened an investigation in 2019 into Pennsylvania's approval of construction permits for the Mariner East pipeline projects. Also that year, Energy Transfer employees were accused of illegally paying Pennsylvania constables to act as private security officers at pipeline construction sites.

A separate pipeline operated by Sunoco leaked 33,000 gallons of gasoline into Darby Creek near Philadelphia International Airport in 2017. The corporation's Revolution Pipeline exploded in western Pennsylvania in 2018.