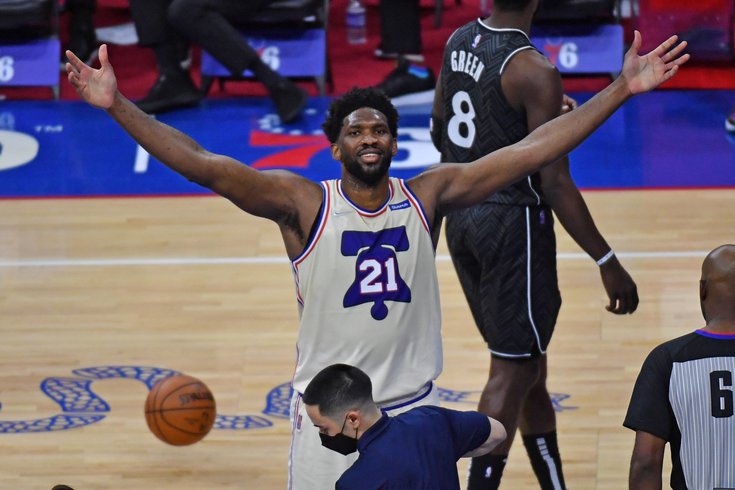 Most of the people involved in the Sixers' push for the No. 1 seed in the East were far away from Philadelphia when the rebuild began back in 2013. Even Joel Embiid, the crown jewel of the organization, was a year of losing away from joining the team that is now synonymous with his name.

But it doesn't take much to bring Embiid back to that place, before all the wins, the heartbreak, and the burner accounts. Sometimes, he even gets gentle reminders from the lead executive of the organization.

"Give them a 'Trust The Process,' Joel," Daryl Morey quipped off-screen at the end of Embiid's Zoom interview on Friday night after their win over the Magic.

As Hinkie has more or less admitted in the years since, no, he did not know. That was sort of the point — the Sixers loaded up (tangibly) on chances and flexibility, possessing the knowledge that there are no sure things, that their best-laid plans could go wrong. Embiid, in a dose of cosmic weirdness, is basically a living representation of that fact. Numerous surgeries, scary falls, and All-NBA seasons later, he is the leader of the team with homecourt advantage in the Eastern Conference.

Philadelphia is at the top for the first time since Allen Iverson's fabled 2001 run, and the oft-injured big with the ironclad memory still has the painful memories fresh in his mind. He rattles off goals not achieved as if they happened yesterday — he remains convinced they would have made the playoffs in 2016-17 if he stayed healthy, for example. Those failures are what make him appreciative of the opportunity he has in front of him, and the situation he finds himself in today.

"Every year, we've gotten better. And this year, you know, I've mentioned that in the past, I just felt like everything was fitting," Embiid said Friday. "From the owners to coaches, the front office to the players, I just felt like everybody was on the same page, and that's why we were able to have such a good regular season. But at the end of the day, it's all good.

"You got to go out and prove why you were the No. 1 seed, you got to go into the playoffs and beat these teams and win the whole thing."

Many (including yours truly) viewed this as a feel-out year, a test to see what Embiid and Ben Simmons would look like together if the Sixers simply loaded up on shooting. Then the Sixers got on the floor and never really stopped winning, even when an Embiid injury threatened to derail a feel-good year before the games really mattered. They pushed for a James Harden trade, they pushed to get Kyle Lowry, and they courted the weight of expectations instead of running from them. Their best player believes he is the MVP. Their point guard believes he is the Defensive Player of the Year.

Can you blame them for wanting to crow a bit while they've been up? This team was down bad less than a year ago, bounced from the playoffs by a hated rival, seemingly stuck with an expensive, ill-fitting roster. And that group only came together after the previous lead executive left the organization in disgrace as a result of a burner account scandal, creating a power vacuum that took years to resolve.

Turns out, they just needed the right people in place to fix things. A couple of acquired shooters later, they're ready to roll. And that has made it easy for Embiid to reflect on the group effort it took to get here.

"We did it as a group. It felt like everybody contributed," Embiid said Friday. "It starts on the defensive end, we've been great all year defensively. I think we have the first or the second-best defense in the league. And then offensively, just playing with each other, moving the ball, finding the right guys, Tobias doing his thing, Ben doing his thing, me being dominant, the bench coming in and keeping the lead or pushing leads. Great coaching staff, great front office. So, you know, the group that we've had this year has been exceptional."

It should not be glossed over, mind you, that catering to the big man specifically was a point of emphasis in the offseason. He didn't exactly keep that a secret. As the new hires and moves racked up in the fall, it was Embiid who was often the first to chime in on social media, expressing his excitement to play under Doc Rivers or poking fun at his previous beef with assistant coach Dan Burke. There were times in the offseason when it looked like the Sixers might hire Mike D'Antoni to lead the franchise, a move that would have inspired questions about how the star player would feel and fit in.

The Sixers should (and do) feel fortunate to have landed on Rivers, who took no time to identify his best player and go to work establishing a hierarchy that placed the big guy at the very top. Much was expected of the star pupil in return, including the expectation he would set the tone at camp with his conditioning, but the reward was what all great players cherish: touches, attention, and help when he needed it.

Rivers being disconnected from the eight years of work it took to get here is a good thing in many respects, but especially this one — there is minimal reverence for locking down the No. 1 seed as a milestone in his mind. This is not the culimination of a years-long process, simply what he was brought here to do. Or, as he explained to reporters Friday, a side effect of the work they're putting in to achieve their actual goals.

"I don't want to downplay it," Rivers said, knowing his own rebuttal was on the way. "I told our guys they should enjoy, you know, I even don't want to call it a moment, I told them to enjoy the second. Because, you know, it's not what we want, but it's part of what you can get on your way to what you want. I think for this team, being as young as we are, to have home court is really important. It's nice to have. And so we should feel proud of it."

Point taken. This is no time for a victory lap, especially after the humbling they were served in Miami two nights ago. The Sixers have rarely been tested all season, and though their full-strength lineup has looked formidable against opponents of all types, they did not put in all of this work just to flame out in the second round once again. All the Dwight Howard theatrics, monster Embiid performances, and Sam Cassell kudos will fall on deaf ears if they don't translate their East-leading campaign to wins in the playoffs. Rivers knows this as well as anybody as he looks to escape the shadow of the spectacular playoff collapses on his resume.

Right now, despite their top seeding in the East, DraftKings has the Sixers at +750 to win the title, according to Pickswise. That puts them tied with the Bucks for the fifth best odds overall, and well behind the leaders, the Nets (+200).

If there is a reason to believe in them, it is their defense. At their best, they have smothered teams and made good scorers dread picking up a basketball in the first place. They haven't been locked in for a while — and frankly, they haven't really had to — and that's part of why Embiid believes they can reach an even higher plane of existence when the real games begin.

"Every play counts, and as good as we were in the regular season, I think we're going to be even better in the playoffs," Embiid said. "In the regular season, [it's] not the right way you should think, but you can kind of sometimes get away with it — not making the right rotations, not being fully committed defensively. But in the playoffs, everybody's got to be on the same page. We have a goal, and we think we can accomplish it. So, everybody's gonna be ready and I think our defense is gonna be even better."

Suddenly, the East runs through Philadelphia. Okay, so it wasn't sudden after all. But if you're a fan of the team, it's something you should enjoy for longer than Rivers' prescribed second. Lord knows you've waited much longer than that.