As Philly prepares for a championship run, young Arthur Embiid will be an inspiration for the big man 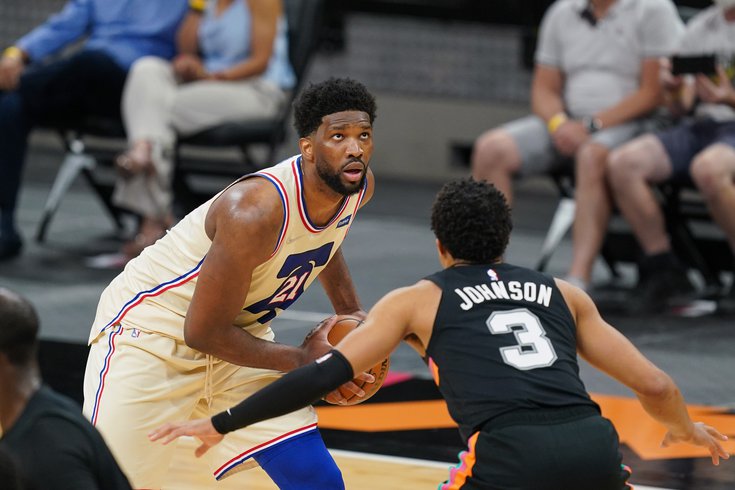 Joel Embiid and the Sixers are gearing up for an NBA championship run that will begin later this month.

The Philadelphia 76ers have their sights set on the top seed in the NBA's Eastern Conference playoffs for the first time in 20 years — and a legitimate shot at their first championship since 1983.

Give credit where it's due across a roster of players who have stepped up all season, but it's impossible to imagine the Sixers in this position without the performance Joel Embiid has turned in this year. He's been a star since he entered the NBA, but his evolution and maturity this season have taken his game to another level.

Embiid's journey to an MVP-caliber season was examined Thursday by Ramona Shelburne in an ESPN Cover Story feature, where Joel talked about the changes he's made to elevate his play this year. Many of them have been about the way he trains and prepares his body, but some are reflections of life changes.

The Sixers' season nearly went up in flames on March 12 during a game against the Washington Wizards. Embiid landed awkwardly after an emphatic dunk, suffering what appeared to be a potentially severe knee injury. Embiid thought so. Coach Doc Rivers thought so. Every fan watching felt their heart sink.

Shelburne's story has a touching detail about how Embiid responded to the injury and the fear that Philly's season was ruined. He looked for comfort back home with his longtime partner, Anne de Paula, and the couple's son Arthur, who was born last September:

Back home in Philadelphia, Embiid's 6-month-old son, Arthur, woke up from a deep sleep around the same time his dad hit the ground in agony.

"Arthur sleeps through the night, every night," says his mother, Anne de Paula. "But he woke up crying hysterically, almost like he had a nightmare."

She'd been watching the game upstairs, cringing as the man she loved lay on the court in pain, when she heard Arthur crying on a monitor.

"They are like best friends," she says. "When Arthur sees him, there is no one else in the room. It is the most beautiful thing ever.

"It almost felt like, with their connection, Arthur sensed something was going on."

Embiid checked the baby monitor on his phone as soon as he went into the locker room and saw that Arthur had woken up. [ESPN]

Embiid's son is named in memory of his late brother, who died in 2014 when a truck driver slammed into a schoolyard in Cameroon. He was just 13 years old. For all the swagger and silliness Embiid has displayed during his time in the NBA, he also has worked to overcome family tragedy and do what would make his brother proud.

Embiid has since returned to the court from his injury and resumed his dominant play as the Sixers prepare for a playoff run. As bad as the knee injury looked, it may have been a blessing in disguise that allowed to him to bond with his family — including his parents, according to the ESPN story:

While he was injured, Embiid was able to spend more time with them than he otherwise would have. That gave him time to reflect, time to notice things he might have missed.

Growing up, he remembered his father as a tough guy with a serious face. He was a general in the army and a star handball player. But while Thomas was in Philadelphia, recently, Joel noticed something new about his father.

"I was just telling Anne, 'I've never seen him smile my whole life,'" Embiid says. "'And since he's been here, he's just been smiling all over the place. Every time he sees [Arthur], when he's holding him. I've never seen this in my life.'"

Surrounded by his loved ones, playing the best basketball of his life, Embiid is as close as he ever has been to the person — and player — he has always wanted to be. But there is still so much to do.

The Sixers' playoff hopes undoubtedly hinge on the health of Embiid's body, but a healthy mind shouldn't be underestimated, either.