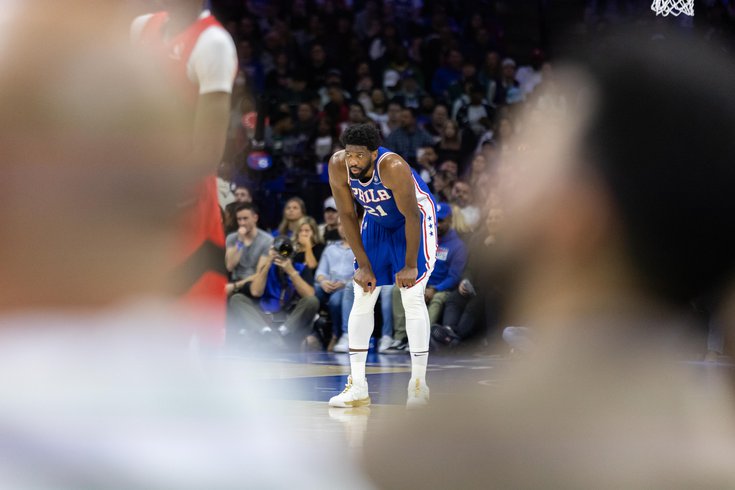 Joel Embiid stands on the court during the Sixers' game against the Raptors at the Wells Fargo Center on March 20.

In a season where Joel Embiid has made a clear case for the MVP award, the big fella continues making history.

Embiid will capture the 2022 NBA scoring title. With Giannis Antetokounmpo resting Sunday for the Bucks, Embiid's current average of 30.6 points per game will make him the first center to lead the league in scoring since Shaquille O'Neal in 2000. As the NBA has progressed to a perimeter-oriented game this century, big men have become deemphasized offensively, but Embiid continues to rewrite what it means to be a modern center.

Not only is Embiid the first center since Shaq to accomplish this, it's only the fourth time since the 1976 NBA-ABA merger that a center has led the league in scoring. Shaq did so in both 2000 and 1995. David Robinson's 29.8 points per game topped the NBA in 1994. For a guy who many believed would never step foot on the court as a pro, Embiid's rise to one of the greatest scorers ever is just mind blowing.

There are two players in NBA history who've averaged 40.4 points or more per 100 possessions (per basketball-reference). One is Embiid. The other is Michael Jeffrey Jordan. The Process and the GOAT.  Whether he's crushing those mid-range jumpers or getting to the line a million times per game because he's so impossible to guard that opponents have no choice but to foul him, Embiid just puts numbers on the board. He is the best "real hooper" center since Shaq.

Embiid's 30.6 points per game are the most for a center since Moses Malone in 1982, when Moses averaged 31.1 (per basketball-reference). This is only the 15th time ever a center has dropped at least 30.6 points per game, a list that includes Moses, Kareem, Wilt, Bob McAdoo and Walt Bellamy. All of those dudes are in the Hall of Fame and I have little doubt Embiid will find himself enshrined there one day.

I don't think Embiid will bring home the MVP award this season with it likely going to Nikola Jokic for the second-consecutive season. If I had a vote, I'd give it to Joel, but, alas, I can't see why the NBA would ever entrust me to have one. Anyway, in the event that it goes to Jokic again, the scoring title should be a more than worthy consolation prize for both Embiid and Sixers fans.