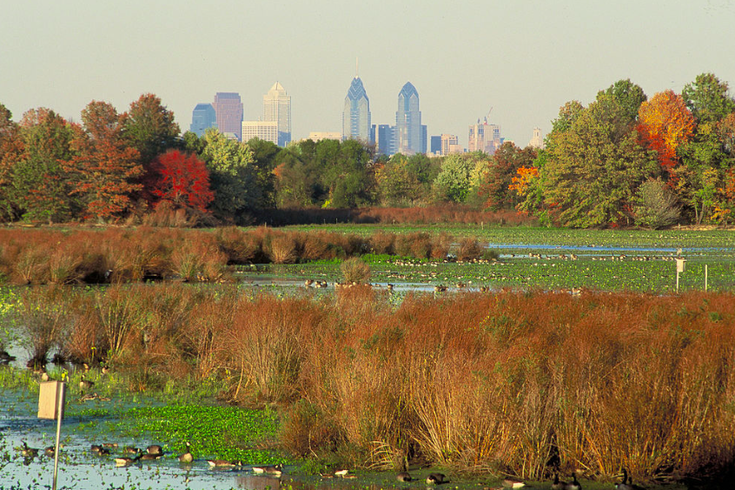 The John Heinz National Wildlife Refuge is celebrating its 50th anniversary tonight. The nearly 1000-acre reserve provides more than 10 miles of trails and a free venue for boating, hiking and fishing. For a wide array of native flora and fauna, it's simply home.

Environmentalists in Philadelphia created the nation's first urban wildlife sanctuary in 1972 and blazed a trail for other American cities to preserve what remained of the ecosystems they were built on.

The nearly 1,000-acre reserve provides more than 10 miles of trails and a free venue for boating, hiking and fishing. For a wide array of native flora and fauna, it's simply home.

The refuge is a prime destination for birdwatchers, since 90 species – including the marsh wren and least bittern – nest there each year. It's also a stop on the Atlantic Flyway, which means another roughly 200 species can be spotted depending on the time of year.

In addition to the catfish, carp and striped bass in the water, the refuge is home to many woodland creatures and a wide array of forest and marine plants.

It contains what remains of the Tinicum Marsh, which spanned 5,000 acres when the first European settlers arrived from Sweden in the 17th century.

Much of the marsh was diked and drained in the colonial era so that it could be converted into farmland. In the twentieth century, most of what remained was drained or filled in for the Philadelphia International Airport, I-95 and suburban housing developments.

By 1953, the Tinicum Marsh had shrunk to just 200 acres. That's when a group of environmentalists found out that Gulf Oil planned to dredge the Schuylkill River and dump the muck into what remained of the marsh.

The group formed an organization that would eventually become the Natural Lands Trust, which successfully stopped the plan. The group is still headquartered in nearby Media.

However, the once vibrant residential neighborhood along the Darby Creek and the marsh's western edge was not preserved. Today, Eastwick is mostly occupied by auto businesses, warehouses and parking lots.

Although it was within city limits, most of the neighborhood was still open space in the 1950s. Many residents lived a rural lifestyle with farming, as well as fishing and crabbing in the marsh.

Eastwick was also one of the only racially integrated neighborhoods in the city at the time, with large populations of both Black people and immigrants from Italy and Poland. But it was not connected to the city's sewer system and was prone to flooding.

Despite a battle to save Eastwick, which spanned more than a decade, the vast majority of the neighborhood was demolished in the name of urban renewal starting in 1957.

Less than a decade later, the refuge's future was up in the air again, too. In 1969, planners wanted to reroute I-95 through the marsh. Environmentalists successfully fought back for a second time through a slow, tedious legal battle.

Congress voted to formally create the Heinz Refuge as a wildlife preservation area of up to 1,200 acres in 1972, but the park didn't get its current name until 1991. U.S. Sen. John Heinz III was a supporter of the project, but died in a plane crash in Lower Merion Township that year.

As the refuge celebrates its anniversary, it's also preparing for a project that will add another 150 acres of protected wetland.

For decades, the Henderson Marsh has been a dumping site for dredge materials. It's currently separated from the rest of the wetlands by giant piles of dirt.

Beginning this winter, the U.S. Fish and Wildlife Service will dig 13,000 feet of tidal channels that will reconnect the marsh with the rest of the refuge, so that fish and other wildlife can repopulate the former dumping grounds, a spokesperson from the service said.

They hope to complete the project by the end of next year. Once it's done, there will be new kayak launches, fishing piers and trails open to the public.

Anyone with a Pennsylvania fishing license can cast their line for free in the refuge. The visitor center also offers free rod rentals. Kids ages 15 and younger don't need a license and the park has events where the requirement is waived for all anglers.

Although the refuge is no longer offering boat rentals, those with their own kayaks are free to use the park's many launches.

The clothing company L.L. Bean is also offering kayak tours in the refuge this summer and fall for between $30 and $70. Members of a Southwest Philadelphia community group can get a free kayak tour by calling the refuge at (215) 365-3118.