Carlos Aparicio is opening El Chingon later this summer, but he's serving cemita sandwiches this weekend in the museum's cafe 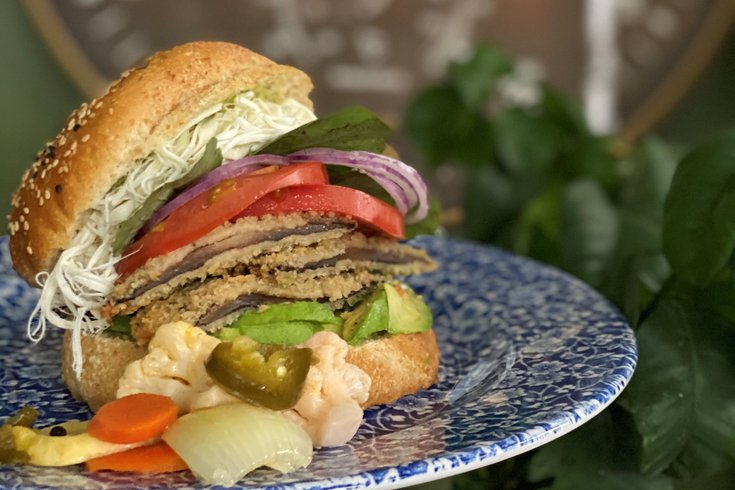 One of Carlos Aparicio's signature cemita sanwiches. He will serve them at the Philadephia Museum of Art this weekend and at his restaurant El Chingon Philly, which will open later this summer.

A new Mexican restaurant with regional dishes from the state of Puebla won't open in South Philly until at least early August, but patrons at the Philadelphia Museum of Art can get a sneak peek this weekend.

Carlos Aparicio is the chef in residence at the museum's cafe and will be there from 11:30 a.m. until 2:30 p.m. Friday through Sunday. His upcoming restaurant, El Chingon Philly at 1524 S 10th St., specializes in cemitas, a sandwich made on a type of round, crusty bun topped with sesame seeds.

At the museum, Aparicio is serving chicken and portobello mushroom varieties of the sandwich for $16. They'll come with avocado, tomato, red onion, quesillo, chipotle adobo and mayo.

Those looking for something more refreshing can try the aguachile – a cold soup with avocado, hearts of palm, cucumbers, pearl onions, cilantro, scallions, lime and serrano peppers for $12.

Although the version he's serving at the museum is plant-based, the dish is usually served with raw shrimp. At the restaurant, Aparicio will serve both the vegan version and one with seafood.

During his residence, Aparicio is serving two items not included on his restaurant's menu.

Tetelas are made of masa stuffed with refried beans, epazote, avocado, cabbage, onions, garlic, cheese, crema and salsa, and are available for $6. A tetela with chicken tinga, collard greens, onion, garlic, tomato and chipotle is also available for $10. 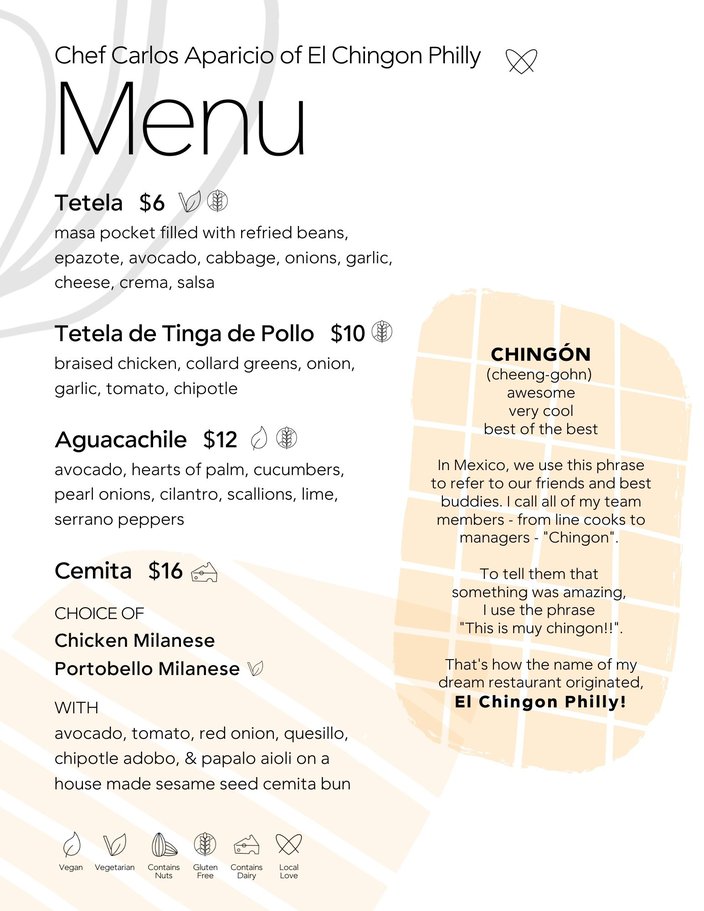 The pop-up is only open to those who buy a ticket to the museum. Admission usually costs $25, but it's "pay as you wish" on Sundays.

Aparicio named his restaurant after a common term of endearment used in his country.

"In Mexico, we use this phrase to refer to our friends and best buddies," Aparicio said. "I call all of my team members – from line cooks to managers – 'chingon.'"

Aparicio was born in Puebla but immigrated to New York City when he was young, eventually settling in Philadelphia in 1999.

Since then, he's made a name for himself at restaurants like Parc in Rittenhouse Square, Zagafen in Bala Cynwyd and the Zavino Wine Bar locations in Midtown Village and University City. Aparicio is currently the executive chef at Enza Pizzeria in Glenside.

El Chingon will not be the first restaurant in South Philly to serve Pueblan food.

Most of the neighborhood's Mexican immigrant population around the Italian Market hails from the area. Before coming to the U.S., many were farmers in the mountainous province's impoverished countryside.

While Cinco de Mayo is simply an opportunity to celebrate Mexican culture for most Americans, in Mexico it commemorates the nation's victory against French invaders at the First Battle of Puebla in 1862.

The museum began its chef in residence program when it reopened after the pandemic last June. It has featured chefs including Nok Suntaranon of Kalaya Thai Kitchen, Tova du Plessis from Essen Bakery and Melissa Fernando from Sri's Company.