The West Chester native, who became the first openly gay NFL player in 2021, is partnering with The Trevor Project 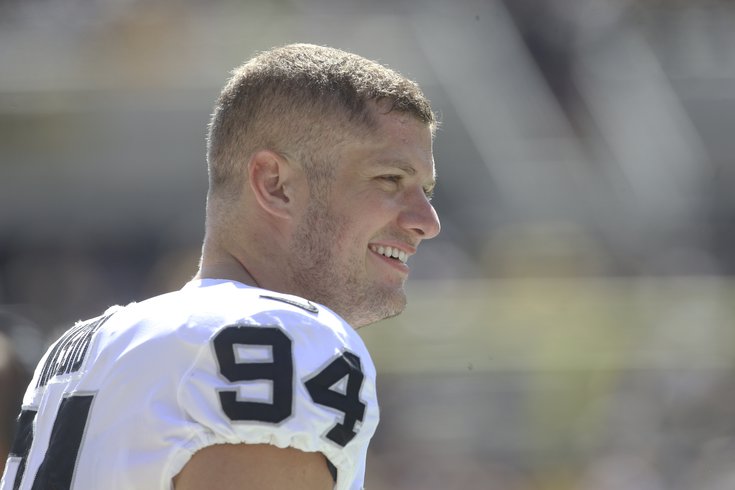 Carl Nassib, former Las Vegas Raiders defensive end, pledged to match up to $100,000 in donations to The Trevor Project in honor of Pride month. He became the first openly gay active NFL player after coming out in June 2021.

Carl Nassib, the former Las Vegas Raiders defensive end, has pledged to match up to $100,000 in donations to The Trevor Project in honor of Pride Month this year.

The West Chester native and one-time Penn State football standout became the first openly gay NFL player after coming out in an Instagram post in June 2021. Nassib is doubling down on his efforts to raise awareness of issues impacting LGBTQ people — particularly mental health and suicide prevention — by supporting one of the leading LGBTQ youth organizations in the United States.

"I want to wish everybody a happy Pride month," Nassib said in an Instagram video on Sunday. "I also want to remind people why Pride is important to me: right now there's a kid saying that 'I'd rather be dead than be gay.' And that's why I'm partnering again with The Trevor Project and matching all donations up to $100,000."

When Nassib came out, he noted the importance of visibility and representation of LGBTQ people in media, and made an initial donation to The Trevor Project, which was eventually matched by the NFL. Since then, he has been released from the Raiders, but is preparing for his sixth season in the league.

The Trevor Project was founded in 1998 as a suicide prevention organization focused on the lives of LGBTQ youth. Each year, the organization releases survey data from LGBTQ children, teens, and young adults, aiming to discern the state of LGBTQ mental health in the United States.

In October, it studied the relationship between bullying and suicide risk among LGBTQ youth.

The nonprofit was named by founders Peggy Rajski, Randy Stone, and Celeste Lecesne after the premiere of "Trevor," their Academy Award-winning short film about a 13-year-old boy who attempts suicide after discovering that he's gay. His attempt is ultimately unsuccessful, and he eventually makes friends who are able to care for him.

Through a combination of crisis and suicide prevention, peer support, research and education advocacy, The Trevor Project hopes to eventually end suicide among LGBTQ people. As they enter into their 24th year of service, the nonprofit hopes to have served 1.8 million people experiencing crisis by their 25th anniversary.

"Carl has inspired others to live their own truth, donate to The Trevor Project's lifesaving mission, and to accept and support the LGBTQ people in their lives," Amit Paley, CEO and executive director of The Trevor Project, told People. "Our research has found that over 80% of youth said that celebrities who are LGBTQ positively impact how they feel about being LGBTQ."

After Nassib came out, he received mixed but overall positive reactions from NFL fans.