The special creation will be available starting at 2 p.m. on Monday at the Bok Bar, but only 100 are being made 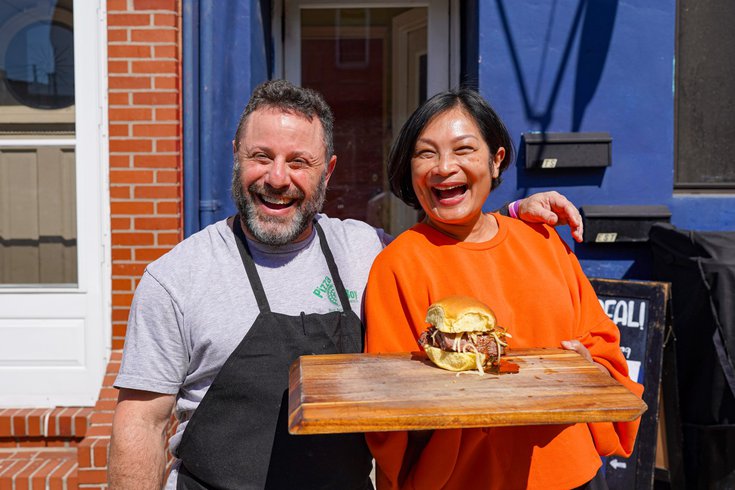 Chutatip "Nok" Suntaranon from Kalaya Thai Kitchen and Mike Strauss from Mike's BBQ are teaming up for a limited edition Thai BBQ sandwich on July Fourth. Only 100 will be available at the Bok Bar in South Philly starting at 2 p.m.

This Fourth of July, two chefs from South Philadelphia are teaming up to bring a Thai immigrant's flare to an all-American classic – the barbecue brisket sandwich.

Mike Strauss from Mike's BBQ and Chutatip “Nok” Suntaranon from Kalaya Thai Kitchen are serving a limited edition Thai BBQ sandwich on Monday, July 4 at the Bok Bar at 800 Mifflin St. starting at 2 p.m. Only 100 are going to be made, so anyone who wants one should plan to get in line early.

The sandwiches feature brisket marinated with fermented fish, honey and special rubs from Suntaranon's hometown of Trang in southern Thailand. It will be topped with her signature papaya salad and sold on a potato roll from the Conshohocken Italian Bakery.

Earlier this year, ​​Suntaranon was named as a finalist for the James Beard Foundation's 2022 best chef in the Mid-Atlantic award. This was the third time she was nominated by the organization. She opened her restaurant at 764 S. 9th St. in 2019.

Strauss has been a fixture in South Philly since he opened his restaurant in January 2018. Last year, it was named one of the best barbecue joints in the city by the Inquirer.

Both restaurants have supported the war effort in Ukraine, but Strauss went a step further than most. Just a week after the Russian invasion began in early March, he bought a plane ticket and flew to Poland to help the World Central Kitchen feed Ukrainian refugees.

"My whole family is from Russia, Ukraine, Hungary, that area," Strauss told Eater. "I wanted to go help these people, they’re my people. Even if they weren’t, I’d probably still go."

Strauss was one of the first volunteers to arrive at Przemyśl, a town on the border, as equipment for the kitchen was still arriving. Strauss said he worked 12 hour shifts and that the feeding operation was 24/7, since many refugees crossed at night when they believed it was safer.

Although Strauss has since returned to Philly, the World Central Kitchen remains in Poland and on the ground in Ukraine. Donations can be made on the organization's website.