The containers featuring Mary Lisle will be released during a happy hour event at the Devil's Den on Thursday, June 30 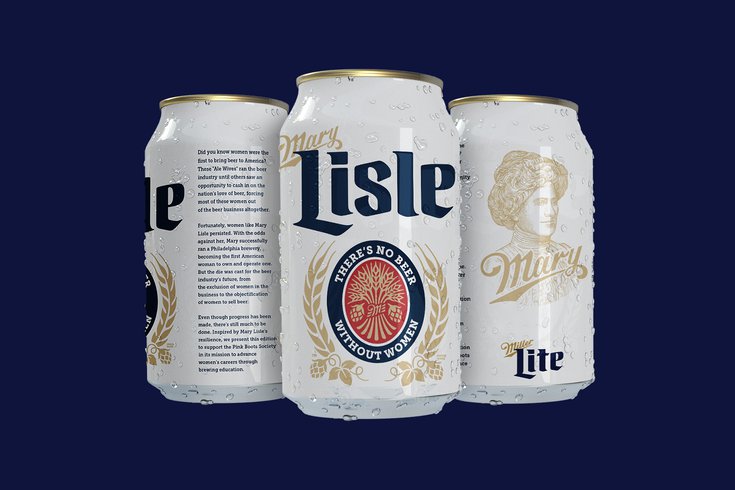 Miller Lite is releasing a limited edition beer can in honor of Mary Lisle, the first professional female brewer in the U.S. She was born in Philadelphia and ran the business she inherited from her father starting in 1734.

Miller Lite is honoring women in the beer industry this Fourth of July weekend with a limited edition can featuring the nation's first known professional female brewer.

Mary Lisle, who was from Philadelphia, will have her name and portrait displayed on the cans, which also have an emblem that says, "There's no beer without women." The company is debuting the cans on Thursday, June 30 with a happy hour at the Devil's Den at 1148 S. 11th St. from 5 to 8 p.m.

The private event is free to attend, but those looking to go must register online.

Miller Lite is also donating $5 to the Pink Boots Society – a non-profit that supports women in the brewing industry – for every case sold on its website between June 27 and July 4.

Lisle became the first professional female brewer in the 13 colonies in 1734 when she took over the Edinburgh Brewhouse, which was founded by her father Henry Badcock in 1685. She ran the business on the east side of 2nd Street near Dock Street until 1751.

She was part of a rich community of beer manufacturers in Philadelphia. At the time, the city was home to over 100 breweries, more than anywhere else in the colonies and nearly twice as many as runner-up New York City.

The city's strong reputation for beer was partly due to Badcock. William Penn bought nearly 50,000 pints of beer from him between December of 1699 and March of 1701.

Lisle may have been the first professional female brewer in what became the United States, but she wasn't the first woman to make beer in the colonies.

By the time she got started, there was already a decades-long tradition of housewives making brews for their family and friends. This tradition can be traced back to the ancient Mesopotamians, who had a beer goddess named Ninkasi. In that society, the beverage was associated with women and domestic life because it was made in the home.

Today, the American beer industry is dominated by men, who constitute more than 90% of the nation's brewers.