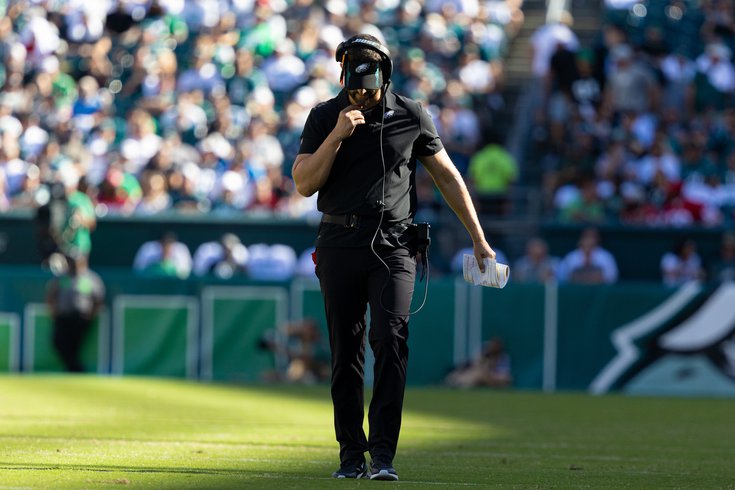 You have to be comfortable in your own skin to be a successful NFL head coach.

Nick Sirianni has shown plenty of positive signs over his first summer as the Eagles’ mentor to make you think he’s going to get there but you can’t make that kind of trip without a few detours in between the destination.

On Sunday, Sirianni went with the standard model GPS instead of firing up Waze to navigate the issues only the locals might know in a 17-11 bowling-shoe ugly loss to San Francisco.

In this town, it's just sound public relations to throw on some Phillies gear before a press conference or an Allen Iverson t-shirt before the home opener.

“I’m a Philadelphian, I root for all local teams,” Sirianni, a Western New York native, smiled when he got asked about his fresh-out-of-the-box Fightins gear earlier this month.

All of that kind of stuff is just good-natured white noise, however, just like when Sirianni breaks out a Jalen Hurts or a Brandon Graham t-shirt to show support for one of his own.

He wants to connect with Eagles fans just as much as his players.

Sirianni went overboard on the former during Sunday’s loss to San Francisco when he trotted out a Philly Special-like play on fourth-and-goal with 4:28 left in the second quarter during a game the Eagles were dominating up to that point, even if they hadn’t taken advantage of all of their opportunities.

The goal was obvious with the names Hurts, DeVonta Smith, and Greg Ward designed to replicate what Nick Foles, Corey Clement, and Trey Burton did on the biggest stage in Super Bowl LII. Success would mean nearly 70,000 playing the role of Mola Ram in Indiana Jones and The Temple of Doom by tearing out the heart of the 49ers before the long trip home to the left coast.

Like any copy, it wasn’t quite the original, to say the least, and unlike the championship team, the young players didn’t execute.

“Give them credit, first of all. I think they did a great job, their defensive coordinator [former Eagles LB DeMeco Ryans] just did a really good job,” Sirianni explained. “So, I give them credit for some of the false things they were showing us. We thought it was a certain coverage; it wasn't.

“They did a good job of disguising it.”

Brilliance In Minneapolis turned to ‘what the hell’ in Philadelphia.

"What I regret is I just wanted - I think I should have called a better play and put our guys in better position to score. So, I take full responsibility on that," Sirianni said.

Critics never really judge play-calling, they judge results and the end game of Sunday’s ill-concerned plot was the demarcation line between the Eagles getting the best of the 49ers and vice versa.

“The play looked good in practice this last week,” Sirianni lamented. “Felt confident in the coverage we were getting, and they didn't play it. That happens sometimes. On second thought do I want that play back? Of course. Any time you call a play that doesn't work, especially in tight games and especially down there in a seven-point play you're going to want that back. So, I've got to call a better play.”

Former Eagles coach Buddy Ryan once said "If you listen to the fans, you'll be sitting up there with them.”

Sirianni wasn’t listening to them but he was trying to placate them with his ill-conceived gamble with nostalgia.

Ironically, what would have really made the fans happy was doing what’s best for the football team and getting them over the finish line with a win.

"We wanted to get an early lead, and to make the [49ers] play from behind," Sirianni admitted. "We didn't capitalize. I think it's a different game, you go up 10-0, and maybe it takes them out of some of their stuff that they really like to do."

Instead, it’s time to open up that Waze app after the 24-hour rule and try to get back on track, hopefully with a lesson learned.