John McMullen: Things are starting to play out for Eagles QB Jalen Hurts 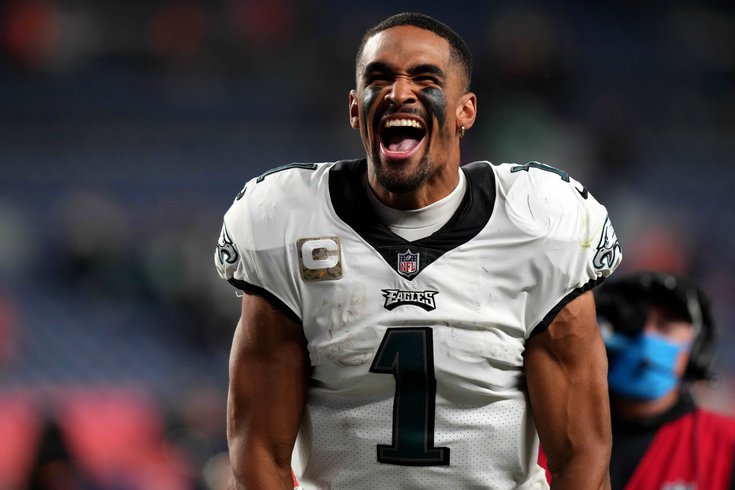 One week the Eagles can’t possibly move forward with Jalen Hurts as their quarterback and the next Howie Roseman contributed an atrocity that may one day be tried in The Hague by daring to cross the state to kickstart the due diligence on Pitt quarterback Kenny Pickett.

Welcome to Philadelphia where the mood swings when it comes to the city’s passion might be kindly defined as bipolar and maybe more accurately be labeled as schizophrenia.

Hurts has always been above it all, a 23-year-old "Old Soul" obsessed by his own process, a word bastardized and broken in the City of Brotherly Love by the Sixers but one still meaningful to Hurts because he's been taught to avoid the "Rat Poison" by Nick Saban while he was at Alabama.

Hurts has somehow done that despite losing his job at Alabama and being pigeonholed as a developmental prospect with a limited upside as an NFL starter by many after finishing as the runner-up for the Heisman Trophy at Oklahoma.

On Sunday after he riddled the Denver Broncos during a 30-13 win in which the second-year QB had his best 30 minutes as a professional, starting the game 15-of-20 for 176 yards, two touchdowns, and a 134.6 passer rating as the Eagles built a 20-10 lead, numbers that would have even been better if Quez Watkins caught Hurts' best pass of the night, a dime that would have been a 34-yard touchdown late in the second quarter.

Hurts' stock among the Philly faithful quickly soared past the much-ballyhooed elevation of the Mile High City itself.

Hurts remains oblivious to it all, almost the tortoise racing the hare.

“Is that what they’re saying?” the QB said to be quizically when I asked if that was the best half of football he's played at the professional level.

To Hurts, it was just another 30 minutes with plenty to improve upon.

“Like I said, scoring on the first drive is very important to me,” Hurts said. “That’s something we didn’t do. I think they presented some different looks to us, sent a lot of pressure at moments in the game. I think there were highs, and the lows. The good, bad, and the ugly, we’re going to learn from it. I’m going to continue to learn from it and grow from it.”

The second half was more ugly from a passing perspective in the form of 1-for-8 for just two yards, forgotten to the heroics of Darius Slay and the running game.

The tale of the two halves was almost the living embodiment of those wild mood swings that write Hurts off after losses and have him en route to Canton after the wins.

"I think he’s very composed," said right tackle Lane Johnson. "He’s always composed. Never see him get too cheerful about stuff, or down. Every day he’s like that. Just been consistent. He works hard and leads our team at practice every day."

You can set your watch to the consistency of Hurts' mindset, ever mindful of the end game.

The hare has raced out to the lead in this race but the tortoise is moving forward relentlessly, a game out of the NFC's final playoff spot with a schedule that tells you the postseason (yes, Jim Mora, the postseason) is in reach.

While others discuss arm strength, decision-making, or accuracy, Hurts just focuses on Sirianni's trite but realistic goal, and one hardly new to football whether it's framed as winning the day or getting one percent better.