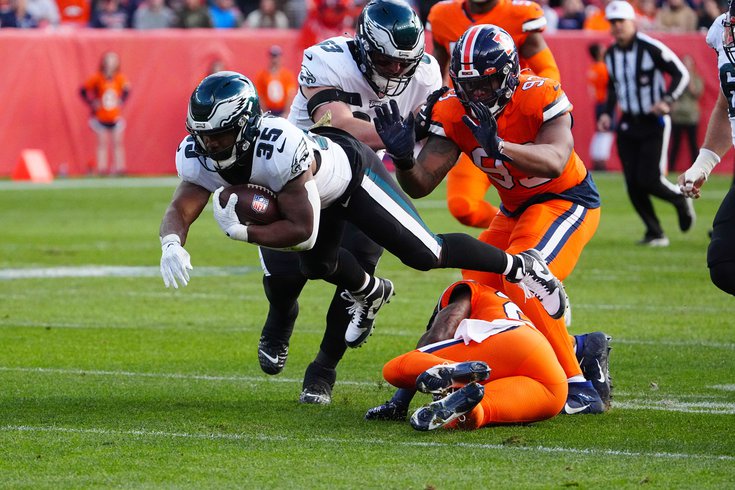 What will the Eagles' playing time distribution look like when Miles Sanders returns from injured reserve?

In their Week 10 win over the Denver Broncos, the Philadelphia Eagles played 64 snaps on offense, and 58 on defense. Let's just get right to the snap counts, and some notes.

Analysis: Hurts had his best half of the season (and his professional career, for that matter) to open the game against the Broncos. He hung tight in the pocket and went through his progressions, he found the open receivers, and delivered the ball accurately to them. In the second half, the Eagles basically just ran it a lot, and Hurts cooled off. Still, this was his best game, and something he can build on.

Analysis: Miles Sanders will come off of injured reserve this week, and Nick Sirianni will have to decide if he will return as the RB1, or just a role player. In Sanders' absence, the Eagles have averaged 209(!) rushing yards per game. If Sanders is the RB1 once again, he will be under pressure to perform the way that Howard and Scott have the last three weeks.

Analysis: Smith is on pace for 71 catches, 1025 yards, and 7 TDs. His contested catch over former Bama teammate Patrick Surtain was the Eagles' catch of the season.

Over the past few years, have you found yourself watching other games around the league and seeing wide receivers make plays that Eagles receivers never make? Well, now they have a guy who can make those plays.

Analysis: Goedert left with a concussion after this hit to the head:

I did not feel that this was a dirty play by Broncos safety Justin Simmons (31), as Simmons was coming in with his shoulder, and Goedert's target area changed when the Ronald Darby (21) tripped him up. I view this as sort of an accidental head shot.

MORE: Is it time for the Eagles to start thinking playoffs? Would that be a good thing?

Analysis: The O-line only allowed one sack and they physically dominated a Broncos defense that was previously seventh-best in the NFL against the run.

Analysis: Barnett cannot return to this team in 2022.

Analysis: During the offseason, we took a look at all of Taylor's snaps during the 2020 season. Spoiler: It was ugly. Taylor was not playable. He was lost, and was going to be easily identifiable player that offensive coordinators would attempt to expose. The concern was that it was going to be hard to get him the snaps he needed in real games so that he could get better. In one year, while Taylor still has a long way to go, he has also come a long way. He is at least a playable player now, and is improving with more playing time.

On Sunday, Taylor had two forced fumbles, one of which preceded Darius Slay's TD return. I imagine his performance on Sunday will do wonders for his confidence.

Analysis: Yes, we all saw Slay's fumble return TD, but the Eagles also did a great job on the Broncos' underrated trio of receivers:

That would be 5.1 yards per target. This group has been the pleasant surprise of the 2021 season.