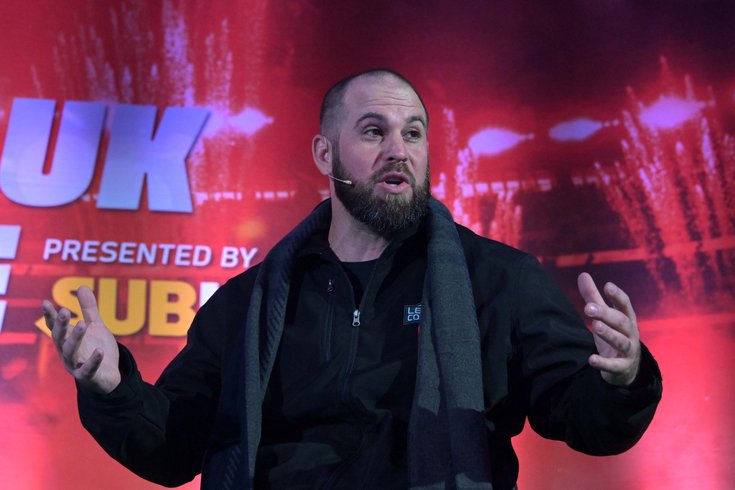 Jon and Annalise Dorenbos thought they were getting a break Wednesday afternoon, January 19. They got a babysitter, a brief respite from their two-and-a-half-year-old toddler. Annalise's back ached, and Jon wasn’t particularly feeling in an errand-running mode, either. The babysitter gave them a chance to do their grocery shopping.

They grabbed up about five bags of groceries, and Annalise made a small suggestion about going on “a date,” doing something adult-like for the first time in a while, like having dinner at a restaurant.

What transpired next falls under the handful of life-changing experiences in the dynamic life of Jon Dorenbos, the fabled Eagles’ All-Pro long-snapper and beloved fan favorite whose mesmerizing magic tricks were introduced to the nation on “America’s Got Talent” in 2016.

Jon and Annalise were having a quiet dinner on the outside patio of a restaurant called Red Table in Huntington Beach, California. It was unusually cool in the early evening, so Jon grabbed a blanket for Annalise.

Two doors down is a mom-and-pop type restaurant called Vegiliciuos, owned by a sweet couple from Japan, Akira and Ana Nakoa. Recently, the couple had bought a small space heater to keep their outdoor dining patrons warm.

“We liked sitting outside and there was no one outside,” Jon recalled. “I put the groceries away, and I just happened to see this big blanket in the back seat. I grabbed the blanket so Annalise would be warm. We ordered dinner, and Annalise and I heard this high-pitched screaming a few doors down, about 20 yards away.

“We both originally thought it was a fight.”

Jon and Annalise stood up; Jon wanted to make sure Annalise was safe.

In a span of seconds, they witnessed Ana’s apron on fire from the space heater, and then the flames engulfed the rest of her as she was serving a family of five, a couple with three small children. Ana was a running torch, screaming from the restaurant toward the strip mall courtyard.

It was surreal, like a movie stuntman running out of a burning building.

“I just grabbed the blanket off of Annalise and I ran over there and tackled her with the blanket and tried to get her to calm down,” recalled Jon, whose inspiring life story is well chronicled and may be turned into a movie. “I was trying to tell her to calm down and that I was going to take care of her, and Annalise ran up behind me. The interesting thing with the breakout of COVID, is that there are no table cloths outside.

“There was nothing to put the fire out. Annalise was grabbing cups of water and throwing it at Ana. I don’t know what would have happened to Ana if we didn’t have the blanket out. The owner of Red Table came running out dialing 911, and then he ran back into his kitchen with a fire extinguisher. That took about 40 seconds and by that time, the fire was out.”

Jon estimates Ana might have been on fire for about 20 seconds before he got to her, and he thinks it might have taken him another 30, maybe 40 seconds to smother the flames.

Jon had fears that the blanket burned into Ana’s body, and her skin would peel away. Ana’s pants were burnt completely off of her body and her sneakers melted.

Annalise is helping Jon cope with the aftereffects of what happened.

“Jon is a hero, the way he jumped up and ran over there and wrapped her around in the blanket and took her to the ground and padded her down,” Annalise said. “We’ll just be sitting there and Jon will tear up. He’s been doing it ever since it happened.

“It’s why I call Jon, ‘Super Jon.’ Super Jon just got up from the table and ran over there.”

It was supposed to be a typical night. It turned out to be anything but. 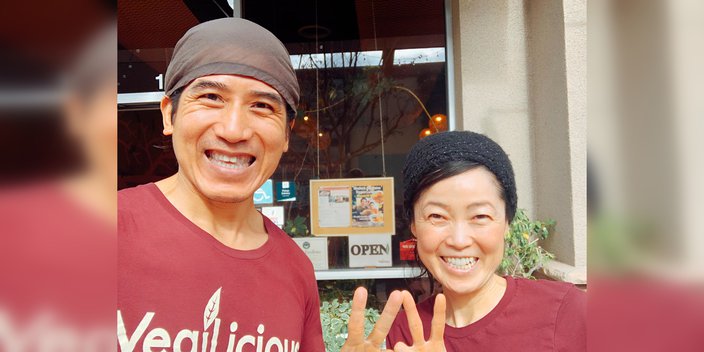 Ana suffered large and deep third degree burns on her legs, buttocks, lower torso and back. Four days ago, at UCI Medical, she underwent her first surgery for eight hours to prep her body for a series of skin graft operations.

Ana’s daily hospital bill is $16,500 and she will not likely be leaving anytime soon.

“We were just going to go grocery shopping and then go home, when Annalise suggested we go out to a restaurant with no screaming toddler, no distractions, just time to relax,” Jon said. “When we got home, we both gave [our daughter] Amaya Love a hug and kiss and put her to bed. Annalise and I sat in the kitchen just looking at each other, thinking, ‘Holy shit, that just happened?’

Jessica Ambrose, the general manager of Trader Joe’s in that strip mall, saw Jon act and still finds it amazing what he did.

“I was afraid I was going to see Jon catch on fire and I’m going to hear this whole thing,” Ambrose said. “I immediately called 911. I saw Jon lift the blanket and it caught a little on fire. I was on the phone with 911 when this was going on. I thought Jon was on fire, as he was trying to get the fire out.

“Jon was talking to her, telling her that she was going to be OK. She has limited English, so she might not have understood what Jon was telling her, Ana’s husband was in the back and didn’t even know she caught on fire. I remember standing next to Annalise and we were wondering where everyone was.

“I remember being on the phone and seeing someone in front of one of the stores saying ‘911, they’re on their way,’ and just walking away. I was like, ‘Am I in a bad movie right now? Looking back on it, what is happening?’ After it was over, Jon and Annalise went back to the restaurant where they were eating and I called him a ‘Super hero.’

“Can you imagine if Jon didn’t have that blanket?”

Jon is making calls to the people he knows through his NFL years and the entertainment industry to help Ana and her family deal with the hospital costs.

It took a while for the story to even surface, because Jon and Annalise thought they were doing what anyone else would do in that situation—saving someone’s life. Though, it’s not exactly part of a normal person’s job description to act in an extraordinary way when a stranger's life is in danger.

They didn’t call any local media outlets or local Los Angeles TV stations. The story surfaced because the friends of a local reporter eat in that strip mall and they had heard about some woman catching on fire and some guy bolting out of nowhere to save her.

“If there is anything I’m really proud and appreciative of through my years in the NFL, it’s none of the accolades, it’s none of the games, it’s none of that,” Jon said. “I was super fortunate to be around amazing coaches and players that every day, whether it’s in the classroom, or just being around these people, they’re teaching you how to deal with pressure, act in pressure, and execute under pressure.

“What I've gotten in life after the NFL is a lot of things happen and lot of people freeze. It’s not because they don’t want to help, they’re in disbelief in what their eyes are seeing. It’s not a knock on anybody. But I’m proud of the characteristic of when pressure hits, you just slow down. Your body speeds up and your mind slows down. That’s what the NFL taught me. The more pressure the situation, the calmer you get and the better decision you make.”

It’s why Jon admires players like Tom Brady and Peyton Manning, because, he says, they’re able to process intense pressure situations in nano-seconds. It's one thing to do it on the football field. It's another thing entirely to throw yourself in harm's way without hesitation.

“Pressure hits and you execute, and then you freak out later,” Jon said. “I’m happy with what I did. But Ana’s recovery is my priority. I’m making calls and trying to reach out to see what we can do to help her out. It’s going to be a long recovery and I want to help this family out.

“We’re very happy Ana is alive. It’s why I wanted to bring attention to this story. It’s why it came out later than it did, because Ana and her family need help.”

Jon’s amazing story circled back to his 11 years with the Eagles and playing under Andy Reid. One of the best feelings of Dorenbos’ career was when Reid would give him a head nod. It happened when he gutted out playing on a sprained ankle, or a variety of other pulls or strains, or the times he made a good play.

Reid wouldn’t say a word. He would walk by, give you a head nod with his little smirk, and keep walking. It was the tacit acknowledgment that you did something good.

“It tears up me thinking about that,” Jon said. “It was Andy’s way of saying you did something really hard and you did it and I’m proud of you. One of the firemen who came to Ana’s aid came back to me and Annalise on the front patio of Red Table. He peaked in the patio and said, ‘Hey, that’s a good job, man.’

“It was interesting, because the fireman nodded his head. It was like that feeling Andy Reid would give you when you did something hard and you did it. That brought back a lot of great memories. It reminded me why you do the things that you do—for the head nod.”

If you wish to contribute to Ana Nakoa's GoFundMe, you can do so here.

Joseph Santoliquito is an award-winning sportswriter based in the Philadelphia area who has been writing for PhillyVoice since its inception in 2015 and is the president of the Boxing Writers Association of America. He can be followed on Twitter here: @JSantoliquito