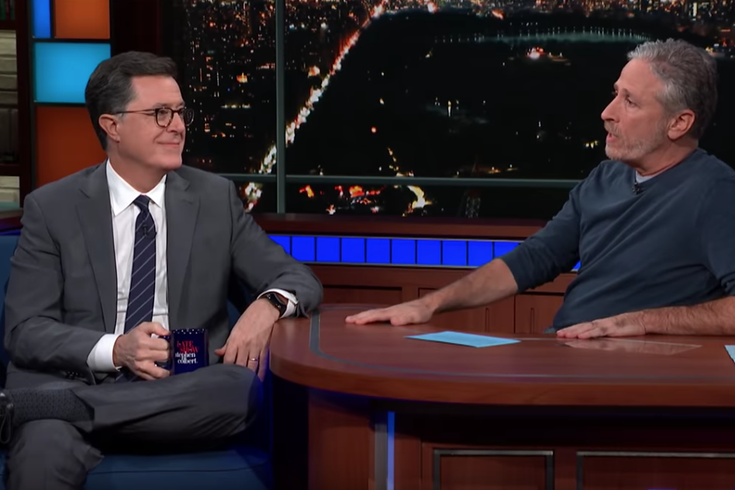 During Thanksgiving break, the late night talk show host pre-recorded interviews with himself as the guest - and who better to start off the evening right than his former partner at Comedy Central?

Stewart introduces Colbert as the "host of the late show on CBS," adding, "for now," and a cheery Colbert comes out to greet the audience. The former "Daily Show" host gets blunt with his first question, asking "Who the f*** do you think you are?" They both have a good laugh before Stewart asks his second hard-hitting question, "Which child do you love the most?"

"Probably Nate?" Colbert answers, to which Stewart laughs and replies, "That's my child."

The two reminisce about "The Daily Show" and Colbert filling in for Al Sharpton as Al Sharpton in one interview and, of course, the two discuss Trump. The discussion brings up a question that Stewart gets asked all the time: would he come back to TV to give commentary on Trump? His response is pretty simple:

“You and I both famously know we were turd miners,” Stewart says, “So working at "The Daily Show," I felt as though I was toiling in the turd mines and then I finally quit and then a giant turd asteroid heads towards the planet. In this instance, if someone said, ‘You were a turd miner. This is the largest turd deposit ever seen. Don’t you wish you were in there?’ And you’re just like, ‘I’m out of the turd business.”

They discussed Colbert's background in comedy, noting a favorable lean in his career toward using characters as a means to deliver jokes. Colbert talks about slapping himself across the face so hard, he would “regret it” to stay in character on "The Colbert Report."
He followed this by mentioning how difficult it was to transition into late night TV without a character. For the first month of "The Late Show" he had his wife sit in the audience as a point of reference to remind him of who he was and to stay out of character.