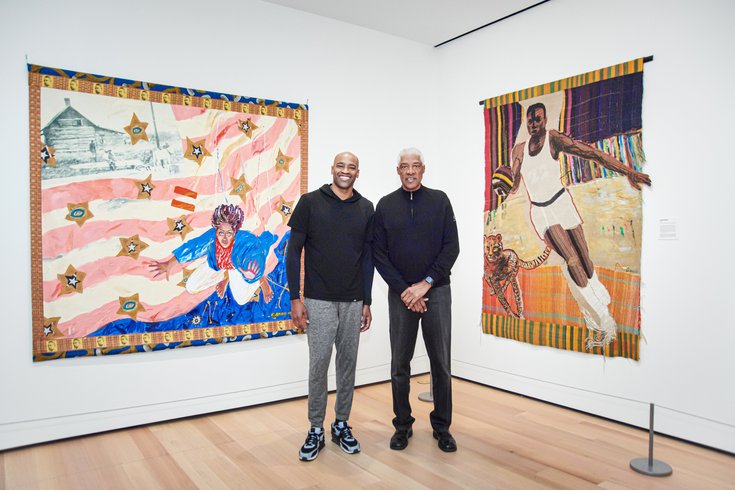 Julius Erving and Vince Carter will explore the Philadelphia Museum of Art's permanent collection of Impressionist artwork in an episode of the latter's ESPN+ show debuting this spring.

Philly basketball royalty and the city's iconic art museum will be honored in a forthcoming episode of a new ESPN+ series hosted by former NBA star Vince Carter.

The ESPN broadcaster will sit down with Julius Erving and visit the Philadelphia Museum of Art during an episode of "Vince's Places" that will premiere on the network's streaming platform this spring. The show is a basketball spinoff of the popular football series "Peyton's Places" starring Hall of Fame quarterback Peyton Manning.

The episode, which was filmed earlier this month at the art museum, will feature Dr. J and Carter exploring the cultural institution's galleries, such as its permanent collection of Impressionist artwork.

Erving and Carter also spent their recent visit to the museum checking out the "Emma Amos: Color Odyssey" exhibition. The exhibition, which opened in October, is the first major retrospective of Amos, who passed away in 2020. It includes works of Amos' ranging from the 1950s through the 2010s. Her artwork sought to explore the intersections of race and gender in American life, according to the museum.

Among the works of Amos that Carter and Erving saw during their visit were "Equals" and "22 and Cheetah," a painting that depicts a basketball player dribbling a ball and running down the court alongside a cheetah. The exhibit is on display through Jan. 17.

Emma Amos first began painting male athletes because she wanted to, in her words, “steal male power.” With these works, she also wanted to address racism in sports. Learn more about Amos's work in "Emma Amos: Color Odyssey" through January 17. https://t.co/SNiIvjBKen pic.twitter.com/nz1Pqz0H3r

Carter and Erving's conversation will fittingly center around the art of dunking. Both players are widely considered to be two of the greatest dunkers in NBA history. 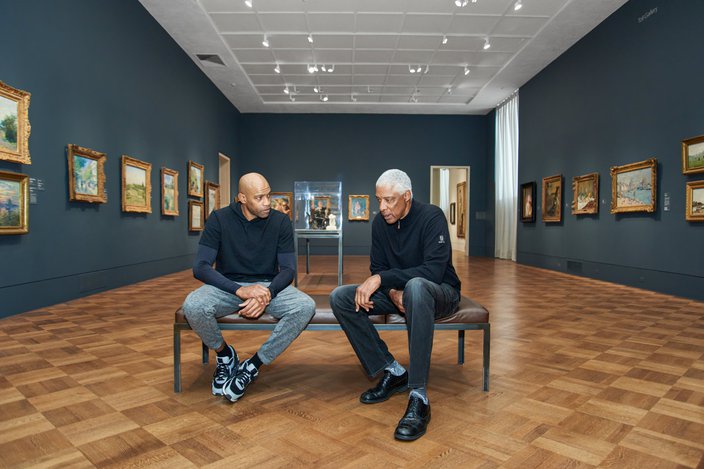 "I think in spending some time with Vince, talking with one another…it’s pretty easy because we’re kinda cut from the same cloth," Erving said in a statement. "Being here at the art museum — that’s a special treat. It’s something that you want generationally to experience, to have your kids experience and then your grandkids experience."

"It’s my first time [at the Philadelphia Museum of Art], so, you know, just to be able to talk about the art of dunking, and the chance to be around the wonderful artistry and expensive paintings and pieces; it’s an honor to have this opportunity," Carter said in a statement. "For all the years that I’ve played and have coached in Philadelphia, I’ve never had the chance to be here, to experience this, so this is a great experience for me, to finally be here. It’s fun."