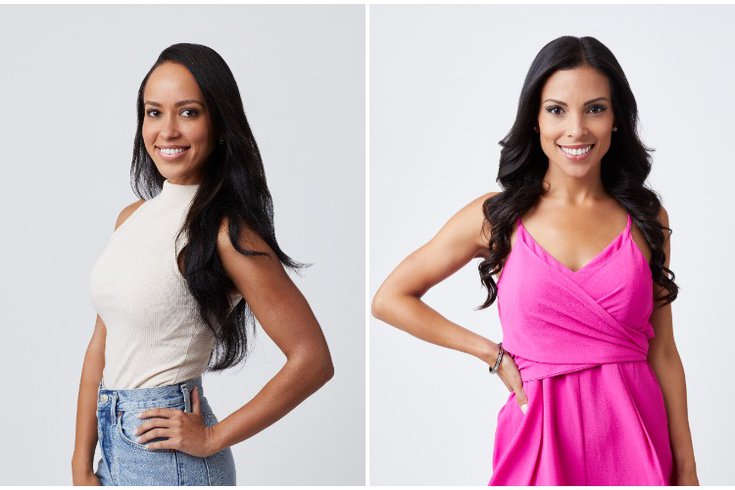 Kira Mengistu, left, and Mara Agreat will compete for leading man Clayton Echard's heart on the newest season of 'The Bachelor.'

The Philadelphia region will be well represented when the 26th season of "The Bachelor" kicks off Jan. 3.

University of Pennsylvania physician Kira Mengistu and South Jersey entrepreneur Mara Agreat are among the 31 contestants who will be fighting for leading man Clayton Echard's heart on the reality dating show.

Mengistu, 32, has served as an attending physician for internal medicine at Penn since October 2019, according to her LinkedIn profile. She graduated with her master's degree in business administration from the Wharton School this year.

The Philly resident earned her bachelor's degree from Harvard University in 2011 and her medical degree from the University of North Carolina in 2016.

Before joining Penn Medicine, Mengistu previously worked as a resident physician for internal medicine at the Cambridge Health Alliance in Massachusetts. She also co-founded a Boston-based, health care multimedia company called Docere and worked for the North Carolina Department of Health and Human Services.

Described as "attractive, ambitious and wildly accomplished," Mengistu is "fearlessly focused and dedicated to achieving any goal she sets her sights on," according to her contestant biography, which details what Mengistu is looking for in a future husband.

"Kira is looking for a mature man who will excite and inspire her. He should be social, always up for trying new things and appreciate the corny things in life. At the end of the day, Kira says she is looking for a man that will look at her the way she looks at french fries and we think she deserves nothing less."

Mengistu has has two cats, loves nachos and taught herself how to write hieroglyphics as a child.

Mengistu will be looking to have more success on the show than current Wharton student Jack Russell, who was eliminated after the first episode of this past season of "The Bachelorette."

Agreat, 32, of Collingswood, Camden County, was born in Puerto Rico and came to the mainland U.S. with her family when she was a child. Agreat "has been spicing up the lives of everyone around her ever since," according to her contestant biography.

Agreat runs an event business, a travel blog and a senior citizen education technology company, according to her Instagram account. She's also worked as a model.

Agreat loves to salsa dance, but hates people who snore and refuses to eat spicy foods. Here's what she's looking for in her next relationship, according to her bio:

"She considers herself the life of the party and is looking for a man to settle down with and keep life fun. When it comes to relationships, she is extremely nurturing but can be quite tough – she loves hard, fights hard and is extremely passionate. Mara is so ready to be in love and not afraid to put in the work to get there."

Agreat will look to replicate the success that Camden County native Zac Clark had on "The Bachelorette'' last year. The Haddonfield native won the show's 16th season when he got engaged to Tayshia Adams. However, the couple has since ended their engagement.

Echard, 28, is a medical sales representative from St. Louis, Missouri. He previously was a contestant on the most recent season of "The Bachelorette."

"The Bachelor" will debut Jan. 3 at 8 p.m. on ABC. New episodes will be available to stream the following day on Hulu.

Jesse Palmer will serve as this season's host. The season was primarily filmed at the show's mansion in Southern California.