Kathy Griffin on Trump, 'that' picture, Roseanne and returning to comedy

The spitfire comic will be at the Kimmel Center next month 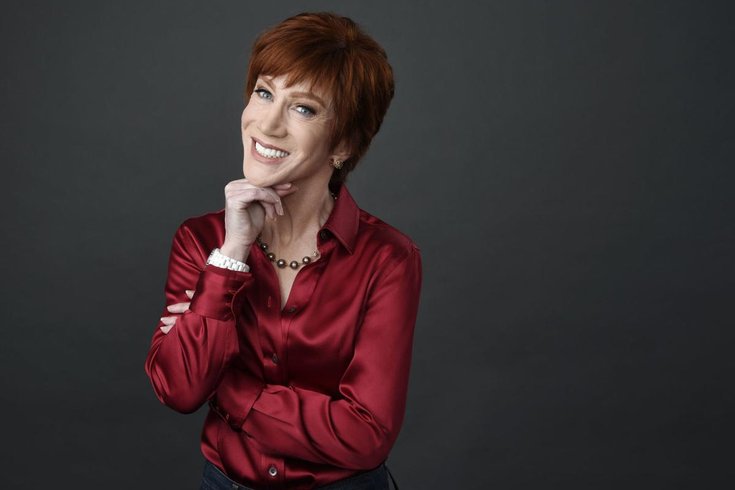 Kathy Griffin presents her Laugh Your Head Off World Tour at the Kimmel Center's Merriam Theater on Saturday, Oct. 6.

Philadelphia is the kind of city that is almost built for a renegade like Kathy Griffin. After high demand, this take-no-prisoners comedian hits the City of Brotherly Love on Oct. 6 for two shows of her Kathy Griffin: Laugh Your Head Off World Tour at the Kimmel Center.

When I sat down with her, I was happy to find the same razor sharp, quick witted and now reflective personality that she always has been. In talking about everything from Roseanne Barr to Samantha Bee to “that” picture, she truly pulled absolutely zero punches. Post conversation, one thing was clear: Kathy Griffin has emerged from the other side of the last year wiser and more capable than ever, ready to take on the stage, the current administration, and now the world.

Philly Voice: In the wake of the Supreme Court’s recent Masterpiece Cake Shop decision, the LGBT community recently found out it could be more difficult for us to purchase a wedding cake. Thoughts?

Kathy Griffin: Oh, the cake! Let me just be honest — the gays don’t really eat those cakes. They like to have them for show, but if they do get one and it’s a gay worth his salt, you know he eats the cake and barfs it up. I mean, you have to take your shirt off because Channing Tatum could be coming out any minute.

PV: After that notorious picture was released of you holding the fake, bloody head of President Donald Trump last year, is it an accurate assessment that the gays, as always, had your back?

KG: The gays did not turn on me. Now, the power gays, let me just say, did not exactly rise to the occasion. You know the names I’m talking about, so, let’s not act like there isn’t a gay mafia, because they made me a star! The gay community was the first community to give me hope that I could do my job. Despite the fake business man in the Oval Office and his sons, Eddie Munster and Date Rape, their concerted effort to decimate me has not worked. As you can see, they recently tried to take down Samantha Bee. TBS stood by her, as they should have, as well as her advertisers.

PV: So, is it safe to assume that you have plenty to say, both about what happened with this administration, but plenty to say about the world of pop culture, as you always have?

KG: We are living in crazy f***ing times. Don’t worry, though, my show in Philadelphia is not just going to be a First Amendment lecture. It’s going to have lots of sprinklings of great pop culture stories. Like, living next to Kim and Kanye West, which is completely true. I have stories that are unique and worth the price of admission just for that part.

Also, remember, I go way back with Trump. I met him on 'Suddenly Susan' in the ’90s! He was with Marla Maples, the showgirl, and that was before Melania went missing. I want you to know, the show is very fluid, but so much is going on. I did five shows in Canada, and they were all totally different. I promise to give the audience the juicy stuff they are showing up for.

PV: Sounds like Philadelphia is in for a once in a lifetime evening with some never heard before stories!

KG: I am bringing it for Philadelphia! For example, I will tell everyone about the day the photo went live: What happened with Anderson Cooper. Who was naughty, who was nice, the death threats, the craziness. People know a piece of that story, but it’s nice to have over a year of perspective be somewhat in the rearview mirror. I also found out I am now on a new kill list. It’s probably because I am too pretty and people are threatened by that — that’s what I tell myself. I don’t even know yet what I’m going to be saying, but I am going to be giving the meat and potatoes. I talk about the interrogation. I take the audience in the room with me and all of the other crazy things that happened.

PV: So, are you able to look back on the year and laugh about this now?

KG:  I hate to admit it, but [the critical tweets from Donald Trump and Donald Trump Jr.] are funny now when I read them. Just the idea that this would come from the president! Now knowing all that we know, it’s just a dream for me to stand onstage in front of not just a couple hundred people. All the old white man dinosaurs were saying, “You can’t tour yet; you’ll be lucky if you can play clubs,” and I said, “I’m playing fucking Carnegie Hall. I sold it out in less than 24 hours.” Now I have added a second show in Philadelphia!

PV: What are your thoughts on Roseanne Barr?

KG: I don’t know that she lost her mind; I personally think she is now a true believer, which I think is scarier. You know how Hollywood works — she’ll probably just go to rehab or whatever. [Laughs] Or she’ll say it was one of her multiple personalities or something. I think she says that because she saw that made-for-TV movie, 'Sybil.' Speaking of Sybil, starring Sally Field, who knew we would live in a world where Sally Field would tweet the word 'c*nt?' The Flying Nun! That’s progress, my friend. 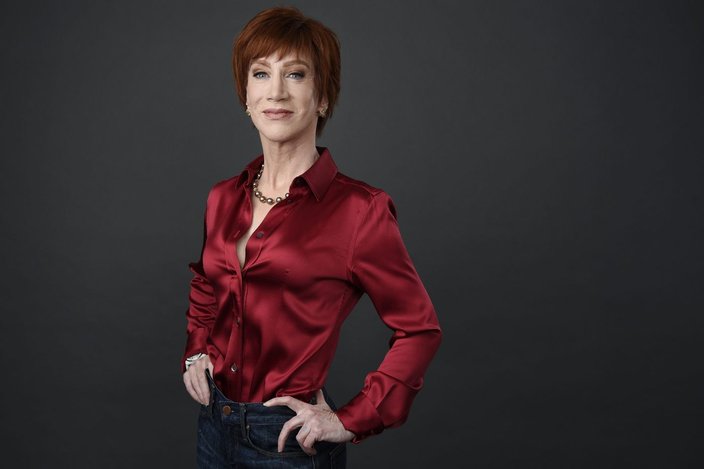 After years of national scandal, Kathy Griffin is returning with a North American continuation of her Laugh Your Head Off World Tour to the U.S., Canada and Mexico.

PV: Roseanne defended the vile thing she said as “a joke” and then blamed it on Ambien. Thoughts?

KG: Let me be clear — her tweets are not jokes at all. When people talk about my photo, I don’t necessarily defend that as a joke either. I thought of it more as a controversial statement. I never thought that photo would be a “haha” joke. Some people found it funny. When I was playing overseas, where they are obviously used [as] imagery like that, I was playing shows and had many people say, “I don’t know what it was about that picture, but it just made me burst out laughing.” I usually would say, “Probably the silliness of it, that I am obviously holding a mask with ketchup."

PV: In today’s sometimes ultra-sensitive world, are comics still allowed to be funny?

KG: I feel that, as a comic, desperate times call for desperate measures. I think it’s great that people like safe comedy with Ellen DeGeneres or prop comedy with Carrot Top or Jerry Seinfeld, who doesn’t curse. I also have my brand of comedy, which, by the way, Donald Trump knows personally, as he has personally hired me to roast him. I have stories in my act about my own personal run-ins with him.

I am proud of that, because I feel like I have some material that no one else has. People react to it. There are times I’ll hear a gasp, and there are times — like when I talk about the interrogation — you can practically hear a pin drop. Then there are times, when I read one of the death threats, and it has people laughing hysterically because it’s so over-the-top. Many Trump fans do not believe in grammar. At all. It’s not a priority! They want that wall!

PV: Post-picture, is it different standing in front of live audiences?

KG: The day that the photo went live, I just happened to be having Kris Jenner and Melanie Griffith over to my house. That, alone, is perfect for the act. Kris Jenner is, on one hand, going, “Apologize. My kids do it all the time." And Melanie Griffith, who is a big lefty like myself, is trying to make me laugh and going, “You should have done the whole cabinet!"

It is so cool now that all the time has passed. I texted both of those ladies when I did my first show in Auckland, New Zealand, and then when I resumed the tour in Canada, and it was just sweet. I make fun of the Kardashians all day long and make fun of all celebrities, but you know, it’s kind of amazing the couple that stuck by me, just getting those texts — “We knew you could do this” – “We knew, in time, you could step onstage, not just in some little tiny venue either!” I am everywhere, from the Sydney Opera House and Carnegie Hall to Radio City Music Hall.

PV: What happened to you seems very similar to what happened to Joan Rivers following her departure from "The Tonight Show" and her own short-lived talk show on Fox.

KG: Yes! As you know, one of the things that made Joan finally get the respect and recognition she deserved is when people saw her go through all those struggles. You could see it on her face. People really came to respect that about her. You knew her, and you knew that all those years, people were trying to say she was mean. It was just such a f***ing joke. I would ask her about this all the time. She really let it roll off her back, and I realized, I really have to get better at that. I’m getting better, but I look at her and how she handled things.

I remember one time she was in this Twitter war with Rihanna. It wasn’t in the days when everyone and their cousin was in a Twitter war, it was entertainment newsworthy. She had a show in Las Vegas the same night I did, and we met after each others’ show and we had dinner. I was kind of cautiously saying, “So, the Rihanna thing is really heating up. Those fans are really going for you hard. Are you OK? Do you have anyone screening those posts? Are you looking at them, are you not looking at them?”