Kenney: Philly will be 'open for business' Monday

Philadelphia Mayor Jim Kenney lauded the efforts of citizens and city workers to help clean up after a blizzard blew through the region and dumped nearly two feet of snow in the city.

Still some effects are lingering as due to continued snow removal efforts.

The city's public and parochial schools will be closed on Monday, as will a number of area colleges, including Cabrini College, Delaware Valley University, Montgomery County Community College, Neumann University and West Chester University.

The city Streets Department said all trash/recycling for Monday has been canceled. Residents must hold their materials until next Monday, Feb. 1. It also said there will be no rear collections this coming week. All should be placed curbside for pickup.

Speaking Sunday morning at the Office of Emergency Management headquarters on Spring Garden Street, Kenney noted that digging Philly out from the aftermath of the storm would be a long-term operation, but said the city would be "open for business" on Monday.

"Mother Nature threw us a curveball, and I think we responded pretty well," Kenney said.

In Philadelphia, cleanup efforts going forward are focusing on clearing the roads. Many major roadways, like Broad Street, were clear and wet Sunday, but many residential streets were still coated with snow.

Officials said the goal is to widen the paths on streets so normal travel can resume.

Kenney repeated a request made Saturday that residents do not throw snow – shoveled from sidewalks, parking spaces and driveways – back onto the streets, as it complicates plowing efforts.

Additionally, Kenney asked residents to refrain from walking in the street, saying it could be dangerous as traffic increases as the conditions become less hazardous. 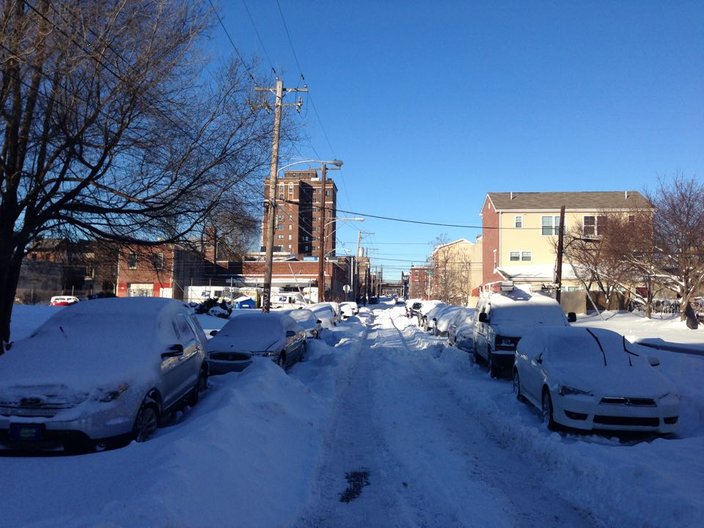 Snow blankets a row of cars parked on Thompson Street near Sixth Street on Sunday, Jan. 24.

She also warned that melting snow could create pools of water that may refreeze overnight, something drivers should be mindful of while trekking out on what looks to be a complicated commute Monday morning.

Phillips said she was pleased very few power outages were reported throughout the city and there were no reported tree emergencies.

PECO said less than 11,000 customers lost power during the storm. More than 3,000 PECO employees, local contractors and crews from ComEd in Chicago worked around the clock to monitor conditions, address customer concerns and restore service, it said.

For all snow-related issues that aren't emergencies, Philadelphia residents are asked to call 311.