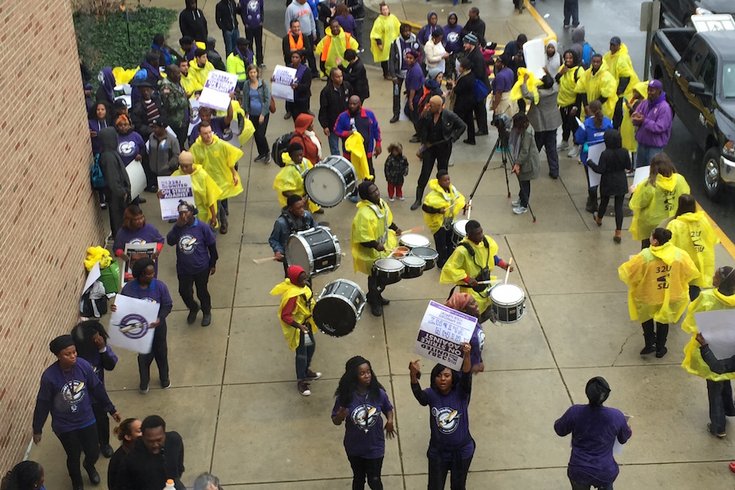 Philadelphia Mayor Jim Kenney reiterated his commitment on Thursday to ensuring a $12-an-hour minimum wage for Philadelphia International Airport workers who went on strike Wednesday and Thursday against a pair of subcontractors who have yet to comply with the required wage increase.

The strike was led by workers with the 32BJ Service Employees International Union who say their subcontracting employers, Nashville-based PrimeFlight and Philadelphia-based McGinn Security, failed to comply with the city's new lease with PHL mandating the $12 minimum wage.

On Thursday, hundreds of workers picketed outside the departure side of Terminal B/C to demand that the two subcontractors meet their obligation.

Last November, mayor-elect Jim Kenney told a crowd of union protesters that he would support them up to the point of evicting any subcontractors who refused to pay workers the required minimum wage.

“This airport is owned by the citizens of Philadelphia, not Primeflight, not McGinn [Security], not American Airlines. It’s owned by the citizens and taxpayers of Philadelphia,” Kenney said outside the airport. “We passed a law requiring a $12-an-hour wage and they’re going to follow that law come Jan. 4, 2016. Things are going to change around here. … We’ll have your back.”

Amid Thursday's protests, Kenney's office issued a letter to PHL subcontractors clarifying the binding terms of the lease signed last July. A spokesperson for the mayor also told the Philadelphia Business Journal that, "as for evicting them, the Mayor is still committed to using that tool and any other means possible to get them into compliance."

The letter sent to airport subcontractors, obtained from Kenney spokeswoman Lauren Hitt, reiterates the terms of the lease:

The Philadelphia Division of Aviation has previously interpreted this requirement to be applicable only to GHSC’s who provide services to an airline which has not entered into a Use & Lease Agreement with the City. Effective immediately, we are requiring all (bold in original) GHSC’s performing work at the Philadelphia International Airport to enter into a Ground Handler Licensing Agreement with the Philadelphia Division of Aviation, regardless of which airline they provide services for.

Please note that the fee schedule identified in the Ground Handler Licensing Agreement will be waived if your firm provides services to an airline which has signed a Use & Lease Agreement with the City. Additionally, Labor Peace language has been added which is identical to the language agreed upon between the Signatory Airlines and the City in the Airport-Airline Use and Lease Agreement.

Representatives of 32BJ Service Employees International Union, who saw the letter for the first time Thursday, praised Mayor Kenney and called the strike an important victory in the push to hold all airport subcontractors accountable for meeting the required labor standards.

Email requests for comment from PrimeFlight and McGinn have not been immediately returned.