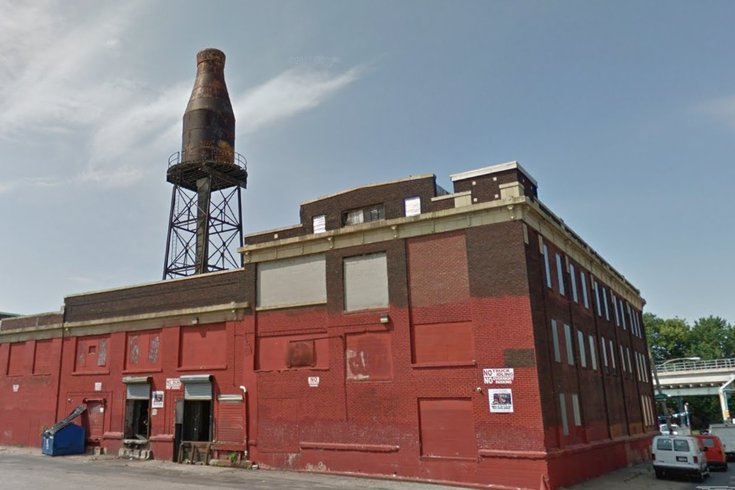 An old Harbison's Dairy warehouse, shown with the iconic, 100-year-old milk bottle-shaped water tower perched on top of it, has been added to Philadelphia's historic register, protecting the water tower and the building from being significantly altered or removed without the city's permission.

An East Kensington property famous for its rusted, beaconing milk-bottle could be slated for redevelopment as an apartment building.

A proposal submitted to the Philadelphia Historical Commission this month would turn the former Harbisons Dairies Plant into a residential space with 55 units spread among four buildings. Office space would also be included in one of the buildings.

Constructed in the late 19th century, the dairy factory at 2041-55 Coral St. was home to an industrial juggernaut in Philadelphia. Harbisons, which predated the advent of the refrigerator, formerly transported milk to Philadelphia from surrounding farms by train. Local deliveries were made using horse-drawn milk wagons.

The milk bottle-shaped water tower, added atop the factory in 1914, outlived the company's dissolution in the 1960's and remains a visible fixture for commuters along I-95 and SEPTA's Market-Frankford Line.

Almost exactly a year ago, the Philadelphia Historical Commission designated the milk bottle a historic landmark, guaranteeing that it will be preserved through any future development.

The proposal submitted by SgRA Architecture would include the restoration of the building's facade, several new windows and the construction of a three-story overbuild on the factory's two middle buildings. The milk bottle would also be freshly repainted with the original Harbisons logo.

A proposed mixed-use renovation of the property last year by Landmark Architectural Associates ultimately was withdrawn after reaction to plans that the development called for lowering the iconic milk bottle. A separate part of the factory at 2042-46 Amber St. has already been converted into a 13-unit condominium known as the Milk Depot Building.

"We are requesting from the Historical Commission a final approval of the proposed development project and restoration of Harbison’s Dairies and the proposed overbuild," SgRA wrote in its proposal. "Stuart G Rosenberg Architects is committed to working with the staff of the Historical Commission to create a successful project in line with the interests of all involved parties."