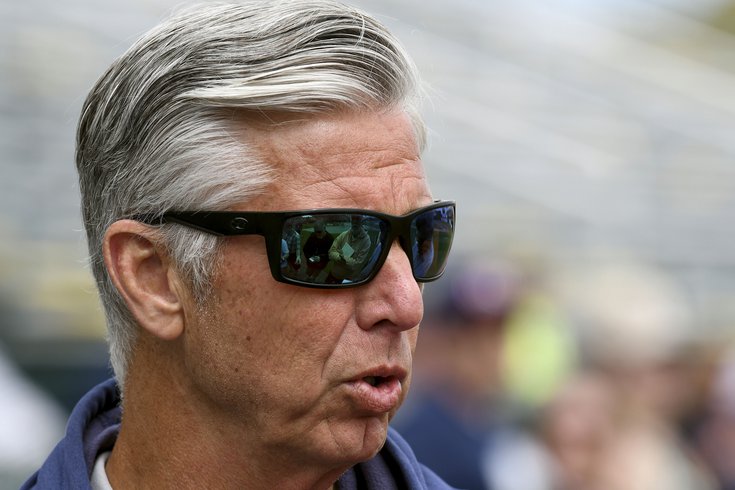 One day down the road, there’s a pretty good chance that Dave Dombrowski will be standing on a late July afternoon in the mountains of New York state, giving a speech with a bronze plaque of his likeness and his career resume engraved in it.

Two World Series championships. Two other pennants with the Tigers. The 1994 Expos, which arguably would have won a World title behind one of the deepest farm systems in the history of the sports. And every franchise he’s overseen has been better when he left than when he arrived.

In other words: the man has earned the benefit of the doubt. He’s not a first-time GM with no track record. Almost quite the opposite — the man has shown he has forgotten more about baseball by 9 a.m. that most people will ever know in their lives.

So try to keep that in mind when you read the guy on Twitter who is crying about the 25-year-old pitching prospect who hasn’t seen more than 120 innings in a season at any level of the sport. On a day when the big spenders were flinging prospects around for the marquee names like dollar bills at a drunken bachelor party, Dombrowski had to plug a roster filled with holes with baseball’s equivalent of pocket lint and a stick of gum.

And yet, the guess here is that the Phillies have a far better chance to end a 10-year playoff drought than they did on Thursday night. The Mets and Braves are better as well. But the Phillies — 3.5 games back of the Mets heading into play on Friday and -400 to win the division at BetMGM, via Pickswise — were not passive at this deadline when it would have been extremely easy for them to be that with a .500 record.

Make no mistake: Kyle Gibson and Ian Kennedy are not Max Scherzer and Craig Kimbrel. But both are significant upgrades to what the Phillies have had in the rotation and bullpen in the past four months. Freddy Galvis isn’t Javy Baez, but he’s also an unquestioned defensive upgrade at shortstop and likely a better offensive player at this point than Didi Gregorius when he is healthy. (By the way, the Gregorius two-year contract is looking like a bad decision by Dombrowski.)

The hand-wringing that seemed to be caused on Friday for many was the inclusion of former top prospect Spencer Howard in the six-player trade to the Rangers for Gibson, Kennedy and prospect Hans Crouse. (The Phillies also sent 2016 second-round pick Kevin Gowdy to Texas along with rookie level prospect Josh Gettner.)

So, let’s look at the reality of the situation: the Phillies traded one legitimate prospects and filled two of their three biggest holes in starting pitcher and closer.

Gibson was an American League All-Star this year with the Rangers. Yes, he has struggled in July with a 6.26 ERA. But his ERA stands for the season at 2.87 — and that’s inflated in part because of his last three starts and a disastrous first start of the season against Kansas City on April 1. So what are you going to believe, the 15 good starts or the four bad ones?

Yes, Kennedy is going to be a rental. But he instantly makes your bullpen better and deeper with a veteran leader at the back end who has seen pretty much everything. More importantly is the idea of slotting Kennedy and Ranger Suarez in the 8th and 9th innings with Archie Bradley perhaps in the seventh. That’s a better bullpen.

Galvis gives the Phillies two solid infield defenders now in him and Ronald Torreyes. It is certainly conceivable that both could end up being the left side of the infield on a lot of days down the stretch because Gregorius and Alec Bohm are such defensive liabilities.

And then there's Spencer Howard, who possessed enough things to tantalize with his potential but not enough health to warrant the almost obscene sentimentality that went along with his departure.

Howard’s career high in innings as a 25-year-old professional baseball player was 112. One hundred and twelve! And that was three years ago. (Two if you want to get technical because of there being no 2020 for minor leaguers.)

Yes, we live in diminished times – but a guy who hasn’t proven the ability to stay healthy and who can’t seem to get on the field isn’t likely going to wondrously turn into a top of the rotation starting pitcher. The fact that Howard was breaking down after three or four innings was an indictment of the Phillies development system in a lot of ways. The fact that Howard blamed running to first base for a huge velocity drop earlier in the season – well, sorry, that’s on the player.

In the end, it comes down to this: do you trust Dombrowski? Do you take a guy who has a great track record in multiple locations and believe he knows what he’s doing?

Ultimately, you should. Because in a year where he didn’t have many cards to deal, he played the hand pretty well. The real challenge comes in October through December when the real building of this roster to Dombrowski’s liking begins.

But again, it’s important to remember that likely scene from Cooperstown that will take place in five, six or 10 years. And on the surface on Friday, Dave Dombrowski did nothing to ruin that picture.