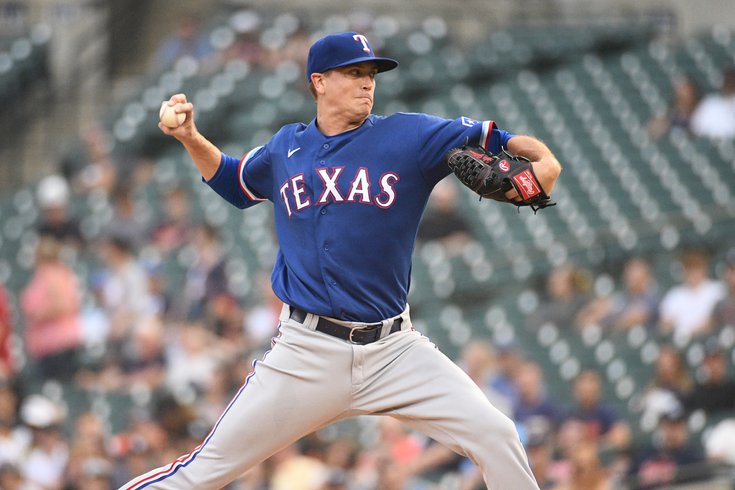 New Phillies starting pitcher Kyle Gibson throws during a game earlier this season with the Rangers.

UPDATE [5:00 p.m.] — The Phillies have made the deal with the Rangers for Kyle Gibson and Ian Kennedy official. They also told reporters prior to the game that there's a chance Gibson makes his Phillies debut on Sunday against the Pirates.

Dave Dombrowski promised the Phillies would be buyers at this year's MLB trade deadline, and it appears he wasn't lying. According to multiple reports, the Phillies have acquired a pair of pitcher — starter Kyle Gibson and closer Ian Kennedy — from the Rangers in exchange for a trio of prospects, headlined by former top pitching prospect Spencer Howard.

Ken Rosenthal of The Athletic was the first to report the deal.

Shortly after 1 p.m. on Friday, Mark Feinsand of MLB.com reported that the Phillies were making "a hard push" for Gibson, and within the 30 minutes that followed, reports began to trickle out that the Phillies were also interested in Kennedy, and that this could wind up being a package deal that included Spencer Howard, which is exactly what it wound up being when the deal was agreed upon just over two hours later.

The Phillies needed help in both areas, the starting rotation and the bullpen, and both Gibson and Kennedy have been good this season, so on the surface, the deal appears to make perfect sense.

But it's not so simple.

Gibson is 33 and has one year left on his deal for 2022 at $7 million, which is plenty reasonable. And despite his age, the right-handed starter is having a career year, sporting a 2.87 ERA and 1.177 WHIP, both of which are career-best marks. His opponents' slash line of .224/.300/.326 is also all the lowest of his career, and his 2.29 strikeout-walk ratio is among the best in his career. Oh, and he also made his first All-Star Game this season.

The problem is, aside from the fact that he's 33 and injuries and age increasingly become a factor later in pitchers' careers, he's also been regressing over the last month of the season, giving up 16 runs in 17.1 innings over his last three starts. Perhaps that's an indication that his stellar start to the season was more of an outlier than anything else. His career ERA is 4.42 and he posted a 5.35 ERA last season and a 4.84 ERA the year before. So aside from a couple of hot months earlier in the season, he hasn't really been trending in the right direction.

Then there's Ian Kennedy, who is another upgrade for the Phillies in an area where they really needed it: their bullpen. He'll likely take over the closer role, as he has 16 saves to go with a 2.51 ERA this season. Unfortunately, he's even older than Gibson (36) and doesn't have an extra year of control his contract. But he addresses the bigger need for the Phillies if they hope to make the postseason and end their decade-long drought, because relief pitchers are crucial in the playoffs. Of course, the Phillies could make him less of a rental if he pitches well and they decide to bring him back for another season, but we're not there just yet.

The Phillies also got 22-year-old pitching prospect Hans Crouse, who was taken in the same draft as Spencer Howard and has a 3.35 ERA in 13 Double-A starts this season.

They're not blockbuster moves, but they're certainly ones that improve the Phillies in the near term. Are they enough to get them past the Mets, who made a few deadline upgrades of their own, and into the NL East lead and ultimately the playoffs? That remains to be seen, with the Phillies currently sitting 3.5 games back with +400 odds of winning the division, according to Pickswise.

The question then becomes the price the Phillies paid to make this deal. Here's a look at the full package sent to Texas.

What you think of this deal likely depends on how you value Howard. But it shouldn't really matter how you value the once top prospect. All that matters is how he is valued around the rest of the league — and that obviously isn't very highly anymore given what the Phillies got back for him compared to what they might've been able to get a few years ago.

Under the old regime, it might be easier to say the Phillies got fleeced here, but this front office is now run by Dave Dombrowski, not Matt Klentak. So it's a little bit easier to give the club the benefit of the doubt when it comes to their trade returns.

And given Howard's injury history, his innings limit and his overall lack of success at the major league level at 25 years old, this probably has more to do with his value than the Phillies getting a raw deal. But only time will tell.

Phillies prioritized money over prospects in this trade. Still possible they add another reliever before 4 p.m. https://t.co/sn0dCDZ02a

Stay tuned, as we'll have more on the Phillies trade deadline coming later on Friday.