The comedian also hyped up his new Philly-based series 'True Story,' which premieres Wednesday on Netflix 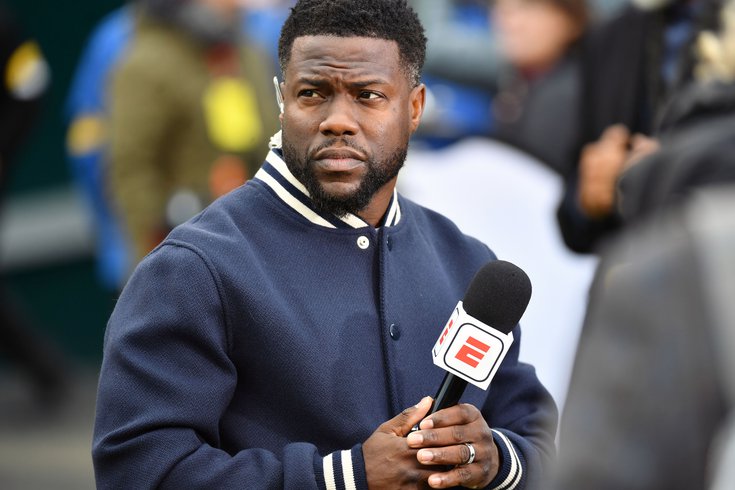 There was no shortage of Eagles energy when Kevin Hart appeared alongside Peyton and Eli Manning on the alternate "Monday Night Football" broadcast.

The comedian showed up during the second quarter of Monday night's game between the New York Giants and Tampa Bay Buccaneers, and it didn't take long for the Eagles and Giants jokes to start between Hart and Eli Manning.

Eli, who played his entire 16-year NFL career with the G-Men, jokingly deemed Hart his team's good luck charm because the actor appeared as the Giants intercepted Tampa Bay quarterback Tom Brady and quickly scored a touchdown to tie the game at 10-10.

Seeing New York immediately score a touchdown wasn't a pretty sight for Hart, but the North Philly native let the former Giants quarterback know that it must be torture having to associate himself with the franchise.

Eli quickly pivoted to making fun of Hart's height, repeatedly emphasizing how big of a football fan Hart is.

"You know Eli, I see what you're doing here," Hart told Manning. "It's very childish what you're doing. Yes, I've been a massive football fan. There's other words that we can use to describe it without emphasizing the word big."

Hart then proceeded to call the Manning brotherhood fake.

"I know the truth," Hart said. "You don't like each other. I've been looking through the smog for all these years. The gig is up boys. Nobody believes it. Because if you did get along, you'd be sitting next to each other in the same room. Instead, you're doing this whole forced viral thing trying to make the world think you're close. I know you're not even spending Thanksgiving together. The family probably doesn't eat together, do they guys? I know the truth. I see right through the Manning boys."

Hart recounted his infamous moment at Super Bowl LII in Minneapolis, where he drunkenly attempted to get on the podium to celebrate with the Eagles and touch the Lombardi Trophy — only to be stopped by security.

"Look man, it was a moment where I got excited," Hart said. "The city of Philadelphia, we had a moment, a big moment, a Super Bowl. I wanted to touch the trophy and I felt that I had every right to be up there with the football team. I am Philadelphia. I bleed Philadelphia green. I wanted to hold the trophy. I wanted the moment with the team. I wanted a piece of the celebration. It's not bad. What's bad is that security system that takes itself way too serious. They're lucky I'm not who I used to be because I could have started laying people down out there."

Hart was at Lincoln Financial Field on Sunday to cheer on the Birds as they defeated the Saints 40-29 to improve to 5-6. He could be seen on the sideline leading the fans in "Fly, Eagles Fly."

Having won three of their last four games, the Eagles find themselves in the middle of the NFC playoff race, and that makes Hart excited about the team.

"I think we're a young team with a bright future," Hart said. "I love the young talent that we have. New coach, new system. These are the things to get excited about. This is when it's dope to be a part of a team and the team's good and bad because you're always going to have a chance to get back to the good."

Hart also talked about his new Philly-based series "True Story," which premieres Wednesday on Netflix. The drama will star the 42-year-old as Kid, a comedian from Philadelphia.

Wesley Snipes also will star in the limited series, which tells the story of how a tour stop in Philly becomes "a matter of life and death."

"Well Eli, it's an exciting time for me, unlike the Giants," Hart said. "I'm doing a lot of big things. What a time to premiere a series like this because this is a time when families are home and they're together and what better way to celebrate the holidays than with some Kevin Hart. I can't think of anything else better. Watch me like you've never seen me before. It's a drama, a thriller to some degree. I'm pretty much putting my talent on display in a way that most have never seen it, Eli. I said, for this year I'm gonna give something to be thankful for, and that's a little dose of me."

"No pun intended, a little dose of you. Got it," Eli quipped back.

Hart's entire "Monday Night Football" segment with the Manning brothers can be seen on YouTube.