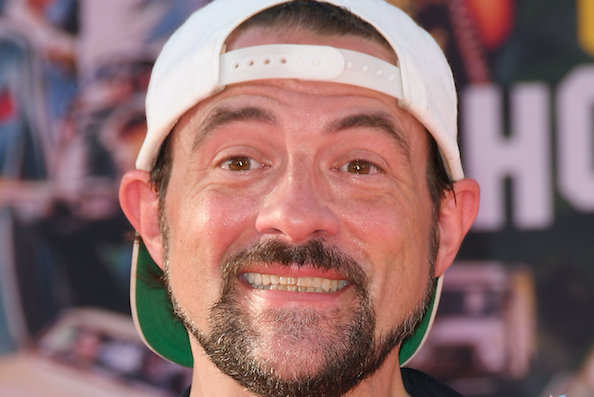 Director Kevin Smith confronted an autograph reseller in Philadelphia after a screening of "Jay & Silent Bob Reboot" at the Prince Theatre. The slacker comedy has been an an indie box office hit thanks to North American tour by Smith and co-star Jason Mewes.

Slacker comedy director and New Jersey-native Kevin Smith has always come across as a solid guy, whether you're a fan of his movies or not.

For an indie, the recently released "Jay & Silent Bob: Reboot" has made waves at the box office, with a single-theater opening weekend that raked in $93,520 at events in New Jersey.

The film's per-screen average is the second best of 2019, behind only "Parasite," and by late October it had brought in more than $1.3 million on a total budget of $10 million.

Smith's success with the new movie can largely be attributed to his "Jay & Silent Bob Reboot Roadshow Tour" with co-star Jason Mewes. The pair have traveled to cities across North America for screenings and Q&A sessions, capitalizing on a diehard fanbase that has turned out for Smith through a decade of podcasting events.

Last Thursday, Smith and Mewes put on a pair of sold-out screenings at Philadelphia's Prince Theater. Like many indie celebrities, they're often asked to sign memorabilia. It comes with the territory of having fans.

The morning after the Philly shows, as Smith and Mewes prepared for a drive to Boston, they were approached by a man carrying multiple copies of signs he wanted Smith to autograph. Smith explains what happened in the Facebook post below.

Essentially, when Smith found out the guy was a reseller, he said he'd only sign one of each poster. The guy got angry, called Smith and Mewes sellout pricks, and Smith fumed about it as they drove off. Then they came to a stop light. Smith got out of the car and started filming the reseller, who hid his face as Smith went off on him.

The best part of this story is excerpted here:

It ate at me that the dude got so ungrateful and s****y as I was signing his stuff, and when we stopped at a light 20 feet away, I was overcome with righteous indignation about the whole exchange. So then I went all “Jersey”, jumped out of the car, and stalked HIM in an effort to snap a pic - to warn other folks in show business or sports about the guy. But Mr. Big Talker Hotel Stalker didn’t want his picture taken, so he pulled up his hood and kept ducking me. Granted, he could’ve turned around and stabbed my indignant ass – but I was so incensed by his audacity, I didn’t think about the repercussions. Not smart and not the guy I wanna be, but like they say: you can take the boy out of Jersey but you can’t take the Jersey out of the boy.

The whole episode is incredibly petty, but it sounds like Smith otherwise enjoyed his time in Philadelphia and was able to get the last laugh. To the reseller, what kind of audacious gambit is this? Is it supposed to be Smith's job to help you make money off of his signature?

Truth told, he sounds like a character in one of Smith's movies.