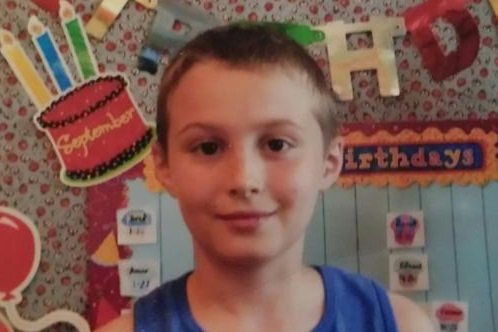 A picture of Logan Cosumano, who has gone missing repeatedly in Maple Shade, NJ and was recently returned safe.

They had to send the helicopter up - twice.

A 10-year-old Maple Shade child, Logan Cosumano, has gone missing four times - officially - and was most recently returned to his family safely on Thursday. Police said in addition to those four times, there was also a time or two that he was found before being entered into the law enforcement database.

The resources needed to repeatedly locate Cosumano, however, have been unique and costly for a police force that protects a town of just 19,100 people.

“I can’t remember anything in recent memory” that compares, said Lt. Jeffrey Hoch of the Maple Shade Police Department Friday. He said there was a case several years ago of a disabled adult that repeatedly went missing but for a child, this was a first.

“We spent a lot of money in the past couple of weeks,” he said of the search for Cosumano, but couldn't give a precise figure.

Hoch described the police effort in missing persons case as “all in.” He said he was proud of the job the department had done successfully locating the 10-year-old each time.

“All in” meant at times getting the state police involved, flying a helicopter to search for him and calling in K-9 units.

In addition, nearby local police departments were involved in the search.

“The area was close to the border of two other towns,” said Hoch. “We had those two other police help search.”

Local volunteer firefighters were also on hand to help out.

While the youth was fascinated with survivalist culture, Hoch said that he disappeared because he wanted to leave home.

“The police’s part is to go out and try and find him and that is what we do,” said Hoch.

As far as intervening to make sure Cosumano doesn’t go missing again?

“Our part of the equation is to make referrals” to state agencies that could provide other types of help, said Hoch. “We aren’t going to be the ones providing the counseling.”

Efforts to reach the Cosumano family were unsuccessful Friday.