And how Jon Bon Jovi wrote 'Blaze of Glory' on napkins 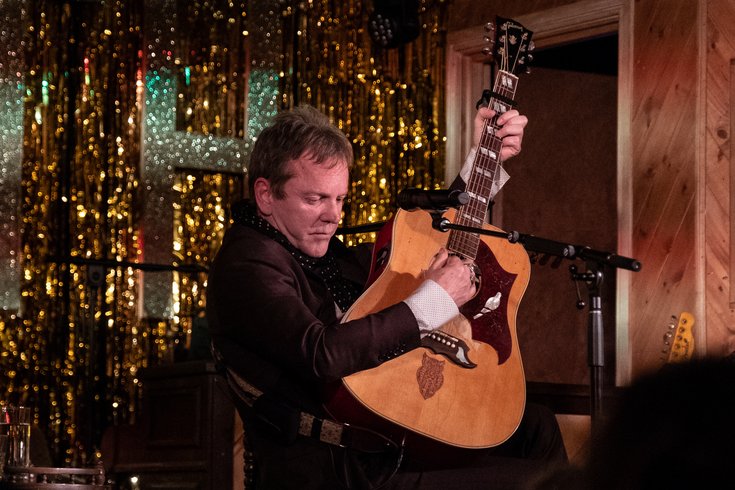 Kiefer Sutherland in concert in London.

Kiefer Sutherland is akin to a shark. The actor/producer/director/singer-songwriter/voiceover artist never stops moving forward and working.

Sutherland, 52, moves from one project to another. Sutherland, who captivated audiences as Jack Bauer in "24," recently completed his second album, "Reckless & Me." He'll showcase the album Wednesday, June 26, at the Ardmore Music Hall, while on hiatus from shooting his dramatic vehicle "Designated Survivor."

In our interview, Sutherland reveals which part was the role of a lifetime, why he has seven-names and if his beloved character Jack Bauer will ever resurface.

Q: What's the biggest difference between the projects you work on today and say "Stand By Me" and "The Lost Boys" from a generation ago?

A: Back then it was the last time without serious technology. Let me tell you a funny story about "The Lost Boys" in regards to technology.

It was the first film I worked on where a director got a monitor as opposed to sitting by the camera. There was a scene I was in which I was supposed to come up a hill and have this moment. He (director Joel Schumacher) kept yelling, 'bigger.' I tried to make the scene as big as possible. If you saw the dailies the next day, the crew got around the monitor in his hand, which was about 18-inches wide. Joel couldn't tell that I was doing what he wanted because of the monitor. He (Schumacher) said, 'this poor bastard was doing just what I asked for but I threw it (the film) in the trash.' He proceeded to watch what I was doing up close after that. I always look back at that movie and think about how it was the last time a director was watching what the actors were doing up close. I miss that tactile connection. Life was so different during the '80s.

Q: Back during the '80s there was such a stigma with actors releasing albums considering the bombs from Don Johnson, Bruce Willis and David Hasselhoff. Is that why you avoided making music a generation ago?

A: There was a stigma for actors making an album then. But I was so busy acting back then.

Q: But you were in a movie with a musician turned actor, Jon Bon Jovi was in "Young Guns 2" with you.

A: Jon Bon Jovi wanted to be in a Western. He was friends with Emilio (Estevez) and so we stuck him up on a roof and shot him. One night we all went to dinner and Jon said, 'when we do the second movie, I want to do the music.' Emilio said, 'how do you know there will be a second movie?' Jon said, 'Don't be an idiot, there will be a second movie.' And then he wrote the lyrics to 'Blaze of Glory' right there in 15-minutes on napkins. Emilio has the napkins framed at his house.

Q: Speaking of actor-musicians, is it true that you auditioned for the part in "Nightmare on Elm Street" that Johnny Depp played?

A: There are a lot of rumors out there but that is not true. I would have remembered auditioning for "Nightmare on Elm Street." I didn't pass on much if you look at how much work I've done. I was close to getting a part in "Platoon," which Johnny Depp was a part of. I wish I was part of that movie.

Q: Since you have quite a bit in common with Johnny Depp, are you two pals?

A: I personally don't know Johnny Depp. I understand that he's a really great guitar player. He's also obviously been a very successful actor. I have a great deal of respect for him. He's a great actor.

Q: You fit the stereotype of Canadians, which is being nice to a fault but you've played some creepy characters, perhaps none more sinister than Ace in "Stand By Me." How much fun is it to play such a jerk?

A: It's fun but yeah, Ace was the nemesis to the four kids looking for the body in 'Stand By Me.' The character was just an asshole.

Q: You've been part of blockbuster films and in some long-running television series. What was or is your favorite gig?

A: Being the voice of the NHL. I've done a few documentaries in which I did the voiceover and it's just the greatest for someone from Canada. There was no way I was ever going to play pro hockey at my size and skill level so having the opportunity to add my voice to some NHL productions was really special.

A: I have no idea. You never know.

Q: Did you have any idea that "24" was going to be so successful?

A: Not at all. I've been wrong predicting so many times in my career that I've stopped guessing. But I will say that Jack Bauer is the gift of a lifetime. I got to play that character for 10 years. Will he come back? I've learned not to say no or never with Jack. People come up to me and call me Jack and it's fine.

A: (Laughs). My dad (actor Donald Sutherland) has never been really honest about our family names. My mom and dad were really poor when I was born. The story from my dad is that he told people that if you feed me dinner tonight, I'll name my son after you.