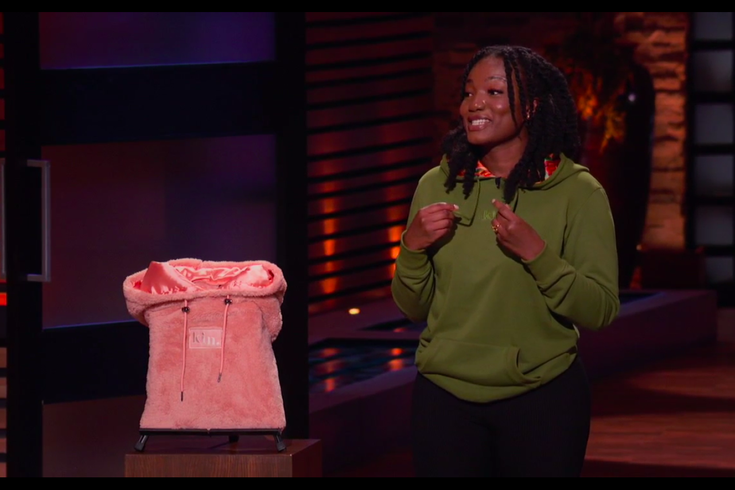 Philadelphia clothing company KIN Apparel was featured in the Season 13 premiere of 'Shark Tank' last week. Since filming the show in July, the company has doubled its revenue.

A Philadelphia-based company that sells satin-lined hoodies has nearly doubled its revenue since filming a "Shark Tank" episode in July.

Founder Philomina Kane, a Princeton University grad living in South Philadelphia, told the Philadelphia Business Journal that KIN Apparel had completed $355,000 in year-to-date sales at the time of the show's filming. Now, the company's revenue has skyrocketed to $700,00.

"It's really beautiful to see that people understand the product and want the product," Kane said.

Shark Lori Greiner, known as the 'Queen of QVC', and guest judge Emma Grede, CEO of apparel company Good American and founding partner of SKIMS, made a joint offer of $200,000 for a 30% stake in KIN Apparel.

The 18-month-old company will use the new funds to increase inventory, find a third-party fulfillment center and hire a dedicated customer service representative.

Kane said she fulfills the hoodie orders from her South Philly house and had just $500 worth of product at the time the episode was filmed. In the weekend after the show aired, more than 1,500 orders were placed, and 66,000 people visited the company's website.

KIN Apparel's hoodies are made with satin-lined hoods, which better protect hair from breakage and keep it moisturized.

Kane said she got the idea for KIN Apparel while she was playing rugby at Princeton University. She'd been chemically straightening her natural hair, which made it delicate and prone to breakage.

When she wore a cotton hoodie in the colder months, she started wrapping her hair with silk or satin to protect it from breakage against the brittle fabric — then the idea for a satin-lined hoodie was born.

Around that time, she decided to chop off her chemically damaged hair and start a YouTube channel to document her hair regrowth journey. Her channel, NaturallyPhilo, gained nearly 200,000 followers. In 2019 she started selling satin-lined hoodies to her viewers.

Haircare has been ingrained in Kane's life. She comes from a family of hairstylists in The Bronx, New York and after graduating from Princeton worked as a marketing director for NaturAll Club, a local hair care company, Technical.ly reported.

In 2020, she quit her full-time job and dedicated her time to developing the KIN Apparel company.