Klentak: Phillies want to 'invest in people like Odubel Herrera'

Some players would have panicked and begun to worry about their future as a potential major league player. Odubel Herrera is not some players.

Two years ago this month, a 22-year-old Herrera was left unprotected by the team that had signed him as a 16-year-old out of Venezuela, the Texas Rangers.

He was a favorite to be selected in the Rule 5 Draft, off to a new organization and facing the uncertainty of establishing himself for a whole new set of evaluators. On top of that, he was learning a new position, too, moving from the infield to the outfield.

But even as he considered the not-so-distant past on Friday, when he and the Phillies celebrated a new, five-year, $30.5 million contract extension (with two club options) that could keep him in red pinstripes until 2013, Herrera flashed his trademark smile.

Herrera’s English is still a work in progress, his ear-to-ear grin didn’t need a translation. Why worry?

“I trusted my ability 100 percent,” Herrera said through Jorge Velandia, a special assistant to general manager Matt Klentak who acted as translator at Friday’s press conference.

“I knew that the minute they didn’t put me on the roster, some other team would try to get me,” he continued. “I continued to play well in winter ball that year … and the rest is history. I knew that someone was going to pick me up.”

Herrera paused and laughed to himself.

“And I thanks the Rangers for (letting me go),” he said with a chuckle.

It was smiles, handshakes, and hugs all around in the media interview room at Citizens Bank Park on Friday morning. Herrera’s agents were on hand, his parents, Nerida and Odubel Sr., flew in from Venezuela, and a healthy contingent of the Phillies front office was in attendance, too, including Mike Ondo, the professional scouting director who wisely plucked the hitting machine away from the Rangers farm system with the seventh overall pick in the 2014 Rule 5 Draft. 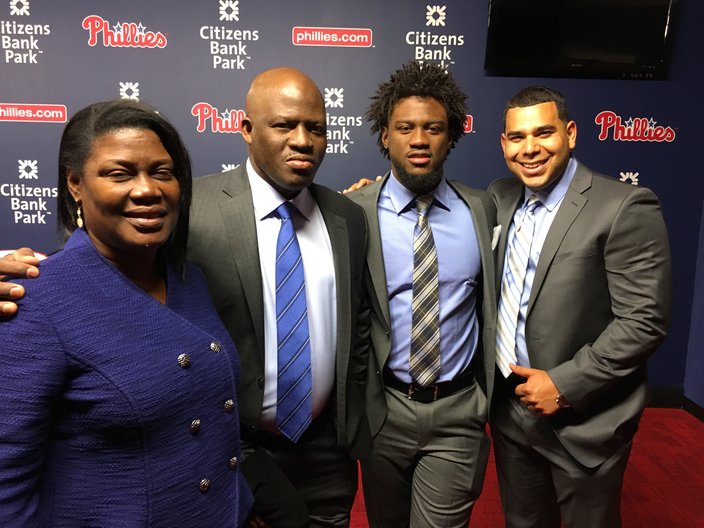 Odubel Herrera celebrates his new contract extension at Citizens Bank Park on Friday with his parents, Nerida and Odubel Sr., and his agent's assistant, Leo Gomez.

Klentak, who just added his only guaranteed salary to the Phillies payroll beyond the 2017 season, was equally as excited for the news of the day. He has cost certainty (on a team-friendly contract) for an All-Star caliber player at a premium position, and control over that player for as much as seven more seasons.

“In it’s simplest form this boiled down to two things: what type of player is Odubel and what type of person is Odubel?” Klentak said in his opening remarks Friday. “On the field, as many of you know, this guy can do just about everything on the field. He can hit, he can run, he can play defense, he’s growing into some power. And as important as maybe all of those factors is he plays with energy. And for a young team like ours, the culture we’re trying to build, the style of play that this young man produces on the field, something that’s very important to this franchise.

"As a person, this is something that I credit Jorge Velandia with quite a bit. Odubel, as we’ve gotten to know his family and as (Velandia) got to know him two years ago in Winter Ball, this kid is a hard worker, he’s a good family man, he does everything right. He’s a great teammate. I think when we make this type of investment, we want to make sure we invest in people like Odubel Herrera. So he should be very proud of that, so should his parents.”

Klentak’s main objective this offseason has been to upgrade his roster for the 2017 season while also keeping a larger eye on the bigger picture, not wanting to bring in any players that might block the paths of his growing assembly of talented prospects coming along quickly in the farm system.

Among that growing assembly of prospects are several outfielders, some closing in on the big leagues (Roman Quinn, Nick Williams, Dylan Cozens) and others a few years or so away (each of the team’s last two first-round picks, Mickey Moniak and Cornelius Randolph). As we mentioned yesterday regarding the 2007 Phillies, having too many talented outfielders isn’t really a problem.

Klentak recognizes that. And he’s also aware that no prospect is a given to prosper.

We believe that what Odubel has demonstrated to us over the last couple years with his work ethic and his on-field abilities and energy level, this is a player that should not be affected by a contract like this.

Locking up the one established outfielder in his organization was a no-brainer, especially on a contract that, at it’s maximum, would cost $52 million over seven years.

Heading into the offseason, Herrera wasn’t even scheduled to become arbitration eligible until after next season and was under team control for four more seasons. Why not pay him close to the minimum again this year and let the arbitration system play out in the coming winters?

“What it boils down to is, ultimately what (manager) Pete (Mackanin) talked about, a belief in the person,” Klentak said. “We believe that what Odubel has demonstrated to us over the last couple years with his work ethic and his on-field abilities and energy level, this is a player that should not be affected by a contract like this. We strongly believe that. If we didn’t believe that, we would not have done this.”

Similarly, Herrera could have shooed away the Phils attempts at locking him into a long-term deal in an effort to hit the free agent market sooner. But, for a kid who isn’t far removed from growing up on a farm in Venezuela, $30.5 million, guaranteed, isn’t something to discard so easily.

“You never know when this opportunity is going to come again,” said Herrera, the Phillies lone All-Star representative in 2016, when he hit .286 with a .361 OBP, 15 home runs, six triples, and stole 25 bases in his second big league season. "This is a dream come true for me. I want to thank my family and all of the people who have helped me out, growing up in Venezuela and teaching me the game of baseball."

Herrera, who turns 25 later this month, was one of just four major league outfielders in 2016 with sport an OBP over .360 with at least 15 home runs and 20 stolen bases. The other three: Mike Trout, Bryce Harper, and Mookie Betts.

Herrera, one of three finalists for the National League Gold Glove for center fielder in 2016, is not at the level of those MVP/MVP runner-up players just yet. But, with a new contract just in time for the holidays, he has certainly established himself as the first major building block of the Phillies next contending team.

And while some could argue that the team-friendly long-term deal (and cost certainty of that deal, which doesn't include a no-trade clause) could make Herrera a very attractive trade chip (not unlike Adam Eaton, who moved from Chicago to Washington last week), Klentak made it clear that that was not on his agenda. Which makes sense, since the Phillies, one of MLB’s worst offense’s last season, are looking to add proven, talented young hitters, not deal them away.

“We have no intention today of trading Odubel Herrera,” Klentak said. “Candidly, we didn't before this contract either, but this is an opportunity to commit to one of our better young players and extend his time with the Phillies by at least one year and potentially up to three years. It's a chance to extend years of control up to three years and retain a player who we think is a really good player.”