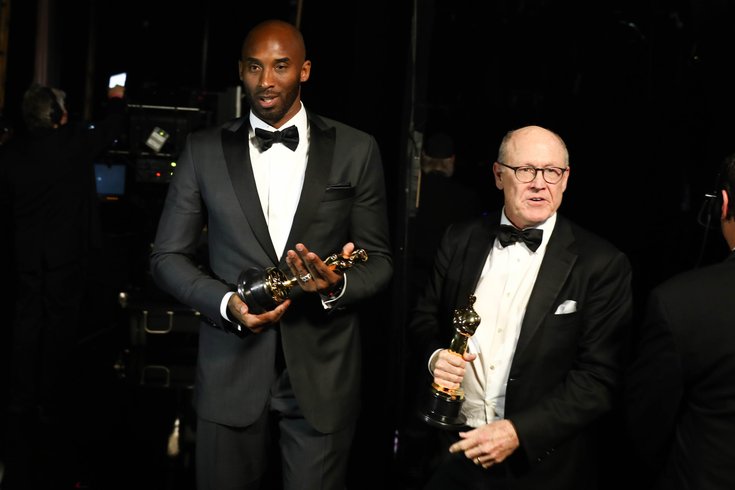 Kobe Bryant and Glen Keane backstage after winning the award for best animated short film during the 90th Academy Awards at Dolby Theatre.

On trend with other award shows this season, the ceremony mingled celebration with activism as the Time’s Up and #MeToo movements have led to major Hollywood players call for more diversity and an end to sexual harassment in the industry.

During Bryant’s acceptance speech, which he made alongside director Glen Keane, Bryant referenced more athletes entering the political dialogue, saying, “I mean, as basketball players, we are really supposed to shut up and dribble. But I am glad we do a little bit more than that.”

Despite this, many were disappointed to see Bryant, who was charged with rape, be rewarded during a year Hollywood is attempting to rectify the fallout of Harvey Weinstein. In 2003 a 19-year-old female hotel employee accused Bryant of raping her in his Colorado hotel room; Bryant admitted to the encounter but denied assault. Those charges were dropped in 2004 and in 2005 Bryant settled a civil suit with the alleged victim out of court.

Viewers were quick to react on social media, and more than 16,000 people had signed a petition since Bryant’s nomination was announced, calling for his removal from the running.

Kobe Bryant joins a long line of men who have both won an Oscar & have been accused of rape. #MeToo #Oscars

great year for women, me too, the time is very up, etc

In a similar vein, many were disappointed to see Gary Oldman win the award for Best Actor for his role as Winston Churchill in “Darkest Hour.” Oldman was accused of domestic abuse by his wife Donya Fiorentino in 2001.

Why don't they ask Gary Oldman about hitting his ex-wife in the face with a telephone? That seems relevant.

Give it up for Gary Oldman and Kobe Bryant, for proving that men with domestic violence or sexual assault accusations can still accomplish anything. #Oscars

Friendly reminder that Gary Oldman once repeatedly hit his ex wife in the face with a telephone and Kobe Bryant spent part of the 90s involved in a sexual assault suit, and are 2018 Oscar winners.

Just days before the Oscars, E! Host Ryan Seacrest also faced accusations of misconduct against him by a former stylist. Seacrest has since denied the allegations of abuse and was cleared by an investigation conducted by his network. He was seen on the red carpet intermittently interviewing celebrities before the program started.

Due to the wave of allegations and awareness surrounding sexual assault in show business and other industries, Casey Affleck, the recipient of last year’s Best Actor Oscar, did not attend the ceremony. It’s typically customary for last year’s winner to present in the following year, but he opted out because he “did not want to become a distraction from the focus that should be on the performances of the actresses.” Affleck has been accused of sexual misconduct by two former employees.

James Franco, who was nominated for Best Adapted Screenplay for his film “The Room,” also was absent from the awards. Franco won an acting award at this year’s Golden Globes, and allegations of misconduct surfaced soon after, causing speculation that he was snubbed from an Oscar acting nomination because of the negative publicity.