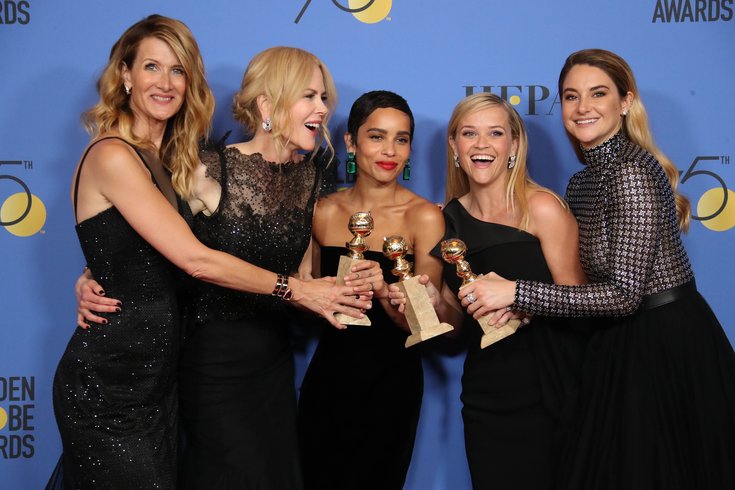 The Golden Globe Awards marked its 75th anniversary Sunday in a ceremony that was unlike any other in the program’s long history. Among the awards for Hollywood’s best film and television of the year, narratives of equality and sexual assault took center stage as the evening’s biggest stars used the show’s platform to speak out.

On the red carpet, almost every single attendee and host wore black in homage with the Time’s Up movement, which calls for change for women in entertainment and in all industries. In addition to wearing black, many actresses brought activists with them to the red carpet and ceremony, including #MeToo founder and onetime Philadelphia-based activist Tarana Burke, who was accompanied by Michelle Williams. TIME has a full list of the activists in attendance here.

“People are aware now of a power imbalance, and it’s something that has led to abuse,” said Meryl Streep in an interview with E! on the red carpet, accompanied by Ai-jen Poo, the head of the National Domestic Workers Alliance.

“It’s led to abuse in our own industry, and to abuse among the domestic workers' field of work. It’s in the military, it’s in Congress. It’s everywhere.”

The theme permeated the night, including host Seth Meyers’ opening monologue, where he brought some humor to the year’s revelations about movie mogul Harvey Weinstein’s long history of sexual abuse and harassment toward actresses in Hollywood.

“Well, I think it’s time to address the elephant not in the room,” Meyers said as he opened the show. “Harvey Weinstein isn’t here tonight. Because, well, I’ve heard rumors that he’s crazy and difficult to work with. But don’t worry, he’ll be back in 20 years when he becomes the first person ever booed during the ‘In Memoriam.’”

The biggest honor of the night was awarded to Oprah Winfrey, the recipient of the Cecil B. de Mille award. In her acceptance speech, Winfrey highlighted the significance of being the first black woman to ever accept the award, and further solidified the evening’s theme of female empowerment and change across industries.

“I want all of the girls watching here now to know that a new day is on the horizon,” Winfrey said. “And when that new day finally dawns, it will be because of a lot of magnificent women, many of whom are right here in this room tonight, and some pretty phenomenal men, fighting hard to make sure that they become the leaders who take us to the time when nobody ever has to say, ‘me too’ again.”

Watch the powerful speech below:

Several of the night’s biggest awards also went to programs that bring awareness to violence against women. “Big Little Lies,” the HBO drama featuring Nicole Kidman as an abused spouse and Shailene Woodley as a rape victim, won the award for best limited TV series, as well as acting awards for Kidman, Laura Dern and Alexander Skarsgard.

In her acceptance speech, Moss said: “Margaret Atwood, this is for you, and all of the women who came before you and after you who were brave enough to speak out against intolerance and injustice and to fight for equality and freedom in this world. We no longer live in the blank white spaces at the edge of print. We no longer live in the gaps between the stories. We are the story in print, and we are writing the story ourselves.”

On the film side, the program’s biggest honors went to “Lady Bird,” which won best Motion Picture – Musical or Comedy and a best leading actress award for Saoirse Ronan, who starred in the coming-of-age written and directed by Greta Gerwig.

Despite the wins for “Lady Bird,” noticeably missing was a best director nomination for Gerwig. “The Shape of Water” ultimately took home a best director win for Guillermo del Toro, but not before presenter Natalie Portman could get in a jab about how all the year’s nominees were male. Barbra Streisand also reminded viewers that no female has won a best director Golden Globe since her 1984 win.

"Here are the ALL-MALE nominees." Natalie Portman presents the names for best director of a motion picture. #GoldenGlobes https://t.co/zYXYaG0ma7 pic.twitter.com/tIosfUGaCt

Here to present our final award of the night is someone who needs no introduction... @BarbraStreisand! She introduces the nominees for Best Motion Picture - Drama. #GoldenGlobes pic.twitter.com/Q946KYUjvH

Another comedy taking in awards was “The Disaster Artist,” with James Franco accepting the award for best actor in a comedy or musical. While accepting his award, he brought brother Dave and Tommy Wiseau, who Franco plays in the film, on stage – though it looked like Franco had to stop Wiseau from grabbing the mic for himself.

Tommy Wiseau tried to steal the microphone from James Franco oh my god I am screaming #GoldenGlobes pic.twitter.com/3MkE7iQS3j

“Three Billboards Outside Ebbing, Missouri” was one of the most significant film winners of the evening, recognized for Best Motion Picture – Drama and best screenplay. Frances McDormand took home a best leading actress award for her role in the film and Sam Rockwell took home a best supporting actor award.

Check CNN for a full run-down of all the night’s winners and nominees.