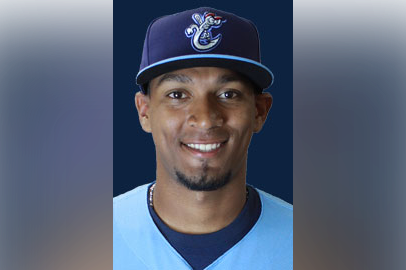 A minor league baseball team in Pennsylvania team has cut a player who was seen hitting his girlfriend in a recently released video.

The Lancaster Barnstormers, a minor league team that is unaffiliated with any Major League Baseball club, announced the release of outfielder Danry Vasquez late Tuesday night. Vasquez had signed with the team in January.

“There is no choice but to sever the relationship,” Barnstormers manager Ross Peeples said. “Neither I, nor the Barnstormers’ organization as a whole, can condone or associate with that behavior.”

The alleged assault occurred in 2016. Surveillance video, originally obtained by Texas new station KRIS6, shows a man identified as Vasquez with a woman in a stairwell inside Whataburger Field, home of the Corpus Christi Hooks, a Double-A affiliate of the Houston Astros.

Vasquez, 24, who played for the Hooks at the time, is seen striking the woman several times in the video. Disclaimer: The video, which can be viewed below, is unedited and may be difficult for some to watch.

The criminal case against Vasquez was dismissed last week, according to KRIS6. Nueces County District Attorney Mark Gonzalez told the news station that while the footage is disturbing, Vasquez has complied with his plea agreement.