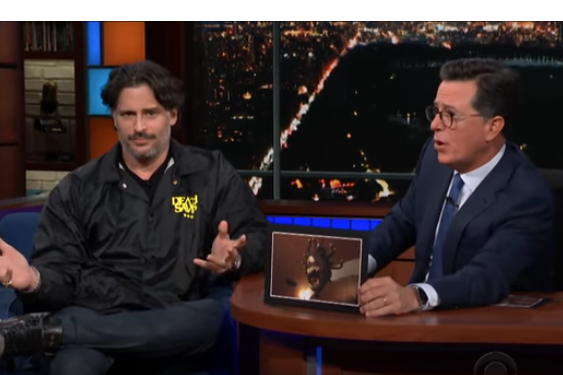 “The Late Show with Stephen Colbert” got rather nerdy last night when Joe Manganiello and New Jersey Sen. Cory Booker both admitted to being huge "Dungeons & Dragons" fans.

Manganiello, who came to the show to promote his new D&D-inspired streetwear line, Death Saves, said, “I’m O.G. nerd, back when it wasn't cool.”

Colbert, a self-proclaimed nerd of D&D and all things fantasy, spent the entire interview discussing D&D with Manganiello, adding nonchalantly, “This might alienate some of audience members here, but I don’t care.”

Manganiello and Colbert compared older editions of the game to the newer additions, since Colbert mentioned he hadn’t played since he was in college. They mentioned a number of intricate D&D elements that the average person wouldn’t understand. Paladin? Oath Breaker? Tiamat? Meat grinder? D20s?

But even if you don't know what a "hit point" is, Colbert and Manganiello’s bonding was so natural and endearing it was easy to look past the aspects that weren't easily understood.

The D&D discussion even bled into Cory Booker's appearance.

He began his interview by mentioning that he’s always trying to do things to cross the aisle, adding, “Now, I’m gonna try to get a D&D game going in the Senate.”

He mentions he grew up playing D&D, but Colbert quickly shut down the conversation by adding, “Let’s move on before they cancel my show.”

“This is a time for Americans to participate,” Booker mentions in regards to the midterms.

“If America comes out and votes, I’m confident the right thing happens.”

In regards to Booker running for President in 2020, he responds by saying rather coyly, “What you know, and the audience maybe doesn’t know it, is that I’m up for re-election as United States Senator in 2020, so I will be running in 2020.”