The latest quarterback comparison for Carson Wentz is Peyton Manning 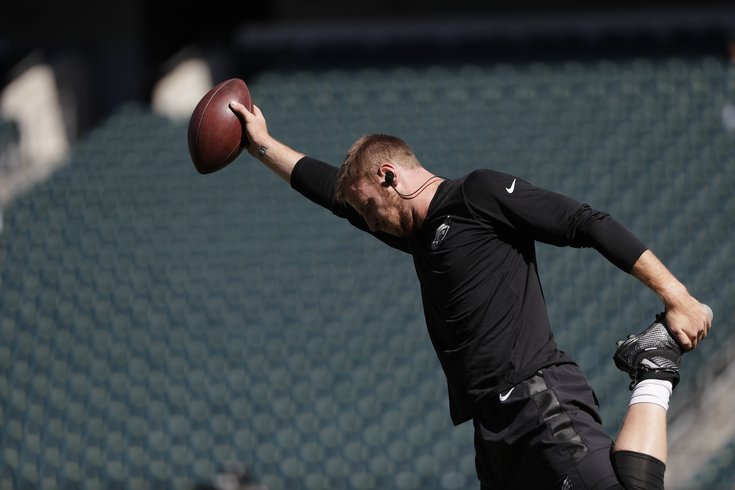 No, Carson. Nobody said Michael Jordan.

Ever since quarterback Carson Wentz was selected second overall in the 2016 NFL Draft by the Philadelphia Eagles, he has been compared to a slew of awesome quarterbacks.

Doug Pederson kicked it off by comparing him to Brett Favre, for his gunslinger mentality.

"A little bit of Brett Favre, honestly," Pederson said. "He's got that mentality. He's got that aggressiveness that Brett had. Those are some of the skill sets that I see in Carson -- that aggression, that ability to throw the ball down the field. I love quarterbacks that are willing to take a chance, take a calculated risk down the field. Favre was that way. I see a lot of the same characteristics in Carson."

Shortly after, Wentz himself noted four quarterbacks he patterns his game after:

• Favre: "I love watching him, his toughness and grittiness, the energy he brings out there. I think those are things I like to model my game after, just the fact that I enjoy it. I enjoy the game, I’m passionate about it."

• Tom Brady: "The way he dissects things and gets the ball out."

• Cam Newton: The way he just makes plays, but also the energy, how much fun he has out there."

And then more recently, offensive coordinator Frank Reich compared Wentz to Andrew Luck for his physical abilities and Jim Kelly for his toughness, via Brandon Gowton of PhillyMag.

“I think physically, he reminds me a little bit of a combination of [Andrew] Luck. I never played with him or coached him, but just watching him play, [he has] some of the same skills. But a guy who I did play with in Jim Kelly, [that] kind of size, strength. Just a toughness. A mentally tough, physically tough attitude. Not afraid to stand in the pocket, take a hit. I think Carson showed that. Having played with Jim Kelly all those years, a Hall of Fame quarterback, you don’t want those guys to take hits. But it’s the willingness on that fourth-and-four, with guys coming up and standing there up the middle, make the play to Ertz, and take the hit. Because that’s what it takes to make that play and keep the drive alive. Those are good signs.”

"He can throw just as good as Rodgers on the run, on the move. He's really accurate on the run," Peters stated. "That's who he reminds me of. Rodgers. When he gets to moving, the way he darts the ball on the run."

The latest comparison? Peyton Manning, via Doug Pederson the day after the Eagles' win over the Pittsburgh Steelers.

"He loves watching tape," said Pederson to reporters Monday afternoon. "He and the quarterbacks – Chase and Aaron – they’re in here at 5:30 in the morning watching the film and exhausting the tape. I hear him just even in the building, he’s constantly talking to guys about plays and routes and protections. It’s Peyton Manning-ish. You hate to label it. I don’t want to put labels on guys, but that’s how Peyton prepared, and that’s how these top quarterbacks prepare each week, and he has that now as a young quarterback, and that’ll carry him through his career."

So he has that going for him.