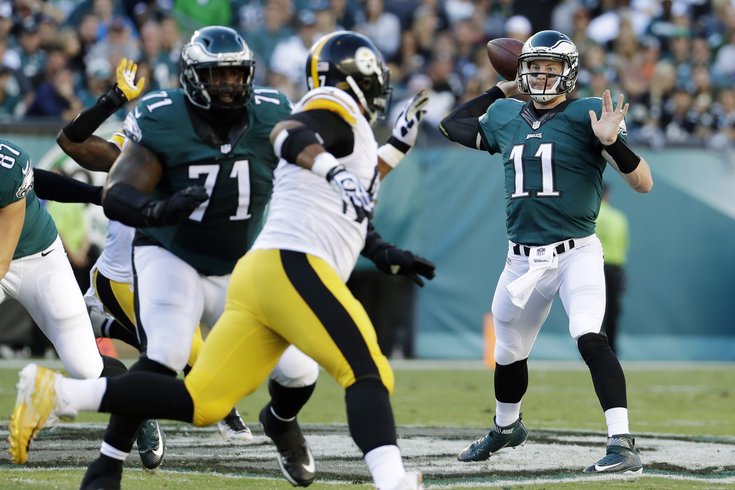 Philadelphia Eagles' Carson Wentz passes during the first half. It was probably a completion...

No one was questioning how good the Steelers were prior to Sunday's game against the Eagles. They were considered a Super Bowl favorite heading into the season, and after back-to-back wins, they seemed to solidify themselves as such.

The Eagles, on the other hand, came in with the same 2-0 record, but far fewer considered them contenders -- after all, they still had a first-year coach, a rookie QB and had beaten two of the worst teams in football.

But the 34-3 beatdown the Birds laid on the Steelers in South Philly likely changed some minds.

Doug Pederson's team soundly beat Ben Roethlisberger and the Steelers, outplaying them in basically every aspect of the game. Offense. Defense. Special teams. You name it.

This was Pittsburgh's worst loss since 1989.

The truth is likely somewhere in between.

“It is still a young season, only three games. This was a good benchmark," Pederson said after the win. "That’s a good football team, the Steelers are a great football team. They are going to be there at the end, they always are. Coach Tomlin always has those guys ready to play.

"But for our guys, it is just a little glimpse of that belief that I have been saying since the spring and summer. If they just do their jobs, I just feel that good things can happen. We just protect each other in that dressing room in there and keep coming to work everyday.”

A large reason for their success is Carson Wentz, who hasn't played like a rookie, but you already know that.

In the win over the Steelers -- another interception-free performance, by the way -- the 23-year-old threw for 301 yards (a new career high) and a pair of touchdowns, competed 74.2 percent of his passes, and wasn't sacked all afternoon. His passer rating? That would be 125.9, or twice that of the veteran QB he was facing. Not too shabby.

After the game, Wentz displayed the same cool, calm and collected demeanor he's shown since he was drafted second overall back in April.

"We view every week as a measuring stick. We're always trying to just get better and go 1-0 every week," he said after the win. "We've done a great job of just keeping it locked in on one play at a time, one rep at a time. Everyone's starting to kind of play inspired football, believing in one another. It's been three great team wins. The defense has been playing phenomenally. Special teams is doing a great job. And offensively, we're doing our part."

But did he envision this unprecedented start three weeks ago when Sam Bradford (who is also undefeated this year) was traded to Minnesota?

"You never really think -- personally, I never like to think that far ahead. I'm really one who just likes to focus in on one week at a time," Wentz added. "I think everyone around here is confident -- we knew we had the ability to [play this well]."

Given how valuable the quarterback position is -- and how impressive Wentz has played -- it's easy to forget that defensive coordinator Jim Schwartz's unit has been playing as well as any team in football.

So far this season, they've allowed an NFL-low 20 points and on Sunday, they held the league's leading rusher through the first two week, DeAngelo Williams, to just 21 yards on eight carries. In fact, the Steelers, who will get Bell back for their next game, finished with just 29 yards on the ground, over 100 yards below what they were averaging (135.5 yards).

“I mean, [the season's] going how you would want it to go," safety Malcolm Jenkins said when asked if he envisioned this kind of a start prior to the season. "We work hard to win. You know, no you’re not going into it thinking you’re going to win every game, all 16. But every game you step into, you step in to win.

"We knew that this was going to be a tough game against a quality opponent. The Pittsburgh Steelers are a physical team. They know how to win. They have a great quarterback, great offense, [and] solid defense that gets after you.

"So we knew we were going to have to show up and this was going to be a test of where we are right now and I think guys answered the bell.”

And even the special teams, which allowed a punt return TD in their Week 2 win over the Bears, played a big part in this one. They set the tone for the game by blocking a Steelers field goal after Big Ben led them down the field on their opening drive.

In the end, it was a total team win for the Birds. And while you may be surprised, their rookie head coach certainly isn't.

Doug Pederson says his players #TrustTheProcess and that's what helped them get to 3-0 today. #Eagles pic.twitter.com/VMsaDzw7Cv

Now, they'll head into the bye with plenty of momentum. The challenge for Pederson now becomes making sure his players stay grounded. A week off is more than enough time to let all this success go to their heads and there's still a lot of football to be played in 2016.

"We’re only as good as the last game," Pederson said. "Anything can happen in the National Football League. I’ve seen too many times things can happen. We just have to focus one game at a time. It’s a one-game mentality. We’re fortunate we get the break.

"Coming off the bye next week, we can get some guys healthy and we have a long push. We just have to focus on one at a time."