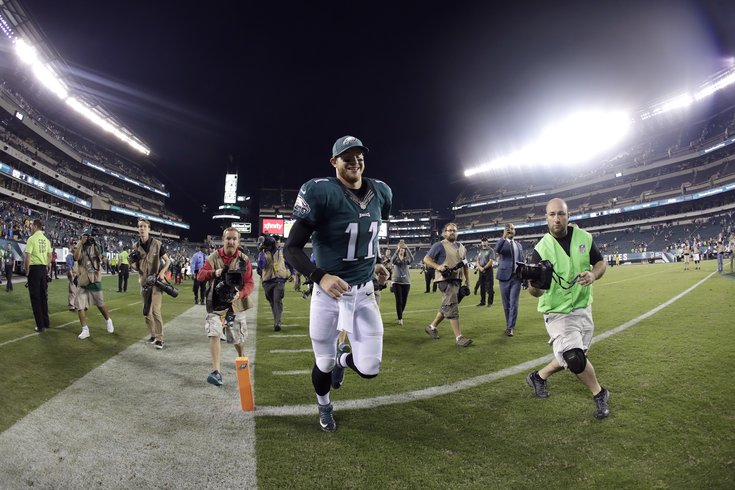 In Week 1, the Eagles beat the lowly Cleveland Browns, and some folks understandably pointed out that they beat, you know, the Cleveland Browns. In Week 2, the Eagles easily handled the Chicago Bears, and once again, many weren't impressed, chalking up the blowout victory as yet another hallow triumph over a weak opponent.

Now that the Eagles have boot-stomped the Pittsburgh Steelers, does that count as a legitimate win?

Anyway, win or lose, as always, we hand out 10 awards.

Just like last week, this isn't even an award. Just... Carson MF Wentz. On the day, Wentz was 23 of 31 for 301 yards, 2 TD, and 0 INT, for a QB rating of 125.9. By my count, of Wentz's eight incompletions, at least four (?) were dropped. Not only does Wentz have the strong arm, the big body, the athleticism, and the smarts, he's been far more accurate than I thought he'd be based on his college tape and what I saw in training camp. His play has simply been remarkable, in every phase of quarterbacking.

Again, not really an award here, but Jim MF Schwartz. The Eagles have given up 27 points this season, which is the fewest in the NFL. The next closest team is (surprise!) the Seattle Seahawks, who have given up 37 points. And that includes four teams, who as of 8:30 p.m. Sunday night haven't played yet.

The Eagles' defense is a like a swarm of bees. They're playing fast, and making plays. And yet somehow, it all looks like it's under control. Many thought the Eagles defense could be very good this season, but nobody could have expected this. Schwartz took a 3-4 two-gapping defense (that was a terrible fit for the Eagles' personnel) and turned it into a ferocious play-making unit that is to be feared.

More from Schwartz after that 4th down stop. Jim Schwatz for President: https://t.co/MQgqLNV6AE

Wentz was unquestionably awesome, but he also had help. All game long he had time to go through his progressions and find the open man, which he did, as noted above, on almost every one of his throws. Give the offensive line a ton of credit, as they did not allow any sacks, and even began to open up some holes in the running game against one of the best run-stopping teams in the NFL.

Smallwood had 17 carries for 79 yards (4.6 YPC) and his first career TD. The Eagles have effectively used all four of their running backs this season, and Smallwood showed impressive burst today.

5) The "Can We Stop Bringing Up Earl Thomas" Award: Brandon Graham

Hey, guess what -- Brandon Graham is a good player. He has a sack in each of his first three games, as well as three tackles for loss, a forced fumble, a fumble recovery, and a boatload of pressures. Maybe he should just be appreciated as a good player, and not "Not Earl Thomas?"

Cox penetrated through the Steelers' offensive line all game long, collapsing the pocket, while picking up two sacks of his own in addition to a tackle for loss. Cox was in Ben Roethlisberger's face for 60 minutes, which makes it difficult to play quarterback.

Sproles had two big plays in the passing game, which led to a stat line of six receptions for 128 yards and a TD. Wentz will get all the credit for this play, and credit for Wentz is certainly deserved for his ability to improvise...

...but Sproles did a fantastic job feeding off of Wentz's improvisation on this play as well, and did a great job of running after catch for the long score.

It felt like there were three Malcolm Jenkinses on the field in this game, as he was everywhere. On the day, Jenkins had five tackles, three pass breakups, and a few big hits. Jenkins is one of the best safeties in the NFL, and he's having an outstanding season on the back end of the Eagles' defense. Again.

9) The Pure Dominance Award: The Eagles

The Eagles haven't just beaten their three opponents this season. They've completely dominated all three of them. In fact, the Birds have a point differential of +65, which is by far the best in the NFL. The next closest team are those piker New England Patri*ts, who sit at +36.

The Eagles also have yet to turn the ball over, and are +6 on the season.

"The Eagles outplayed us today and got the win," said insightful Steelers cornerback William Gay.

Does he even have any competition through three games?