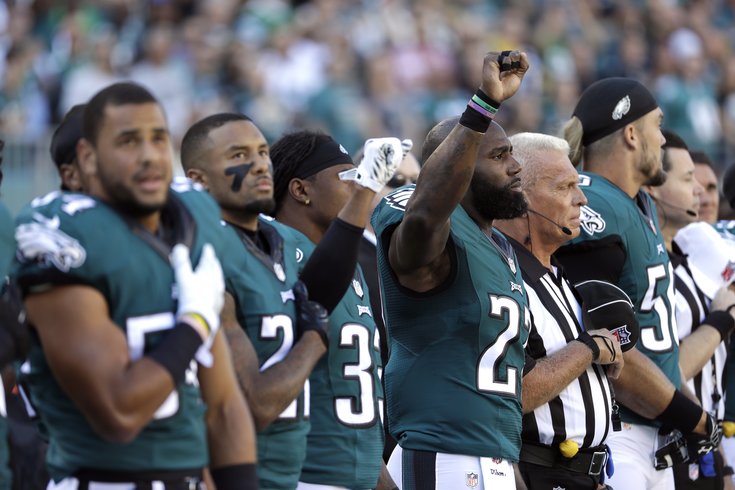 Philadelphia Eagles' Malcolm Jenkins and Ron Brooks gesture during the singing of the National Anthem before their game against the Pittsburgh Steelers.

Somewhere in sections 104 or 105, no one can pinpoint exactly where or who, the vitriol spewed above the din of the national anthem being played. Someone wasn’t too pleased with Malcolm Jenkins’ gesture of raising his fist during the Star-Spangled Banner at Lincoln Financial Field on Sunday.

It turned some heads, but not many really noticed. Nor really cared.

One security guard just shook his head after the anthem was over, in reaction to the yelling fan, just saying, “No one could make out what the idiot was screaming anyway, but what little I heard wasn’t good [aimed at Jenkins]. The guy was shouting at Jenkins during the national anthem about being disrespectful, while [the fan himself was] being disrespectful during the national anthem. That made a lot of sense.”

This was the first time Jenkins raised his fist before an Eagles crowd at the Linc. And the reaction was very much in favor of the Eagles’ veteran safety, according to the over 25 people PhillyVoice spoke to on Sunday just before the Eagles kicked off to the Pittsburgh Steelers.

“I have no problem with what Malcolm Jenkins did, and with people expressing themselves [during the national anthem] the way they want to express themselves,” said John Richard, 25, seated in section 101 behind the Eagles bench, who is originally from the Frankford section of Philadelphia and who just got from a tour in Kuwait after being deployed by the United States Army. “If NFL players want to do it, let them do it. They have to express their views here on this stage, and I understand it. It’s different from sitting down during the national anthem.

“I know Philly, and this is Malcolm Jenkins, and he’s loved by the fans—and Philadelphia is a football nation. He’s fighting for what he wants and he’s doing it in a respectable way. He’s standing up during the national anthem. He’s still respecting our country. There are a lot of meatheads in an Eagles crowd. There are people that aren’t going to like it, because there are always those kind of people. I served our country and I don’t think he’s doing anything wrong. He’s a classy guy.”

There were a variety of opinions that were expressed. Many didn’t want to comment when asked. Most African-Americans that were approached did want to respond.

Brandon Collins, originally from Pittsburgh and wearing a Steelers jersey (though he now lives and works in Philadelphia), had no issue with what Jenkins did.

“I’m very much in favor of what [Jenkins did], because I understand it signifies a part of [African-American] history and part of our culture,” Collins said. “It’s 2016 and racism exists, but if you leave it alone and draw light to it, it will continue. It shouldn’t bother anyone what [Jenkins] did. It starts with a dialogue. People are drawing more of a spotlight to this than needs to be, but it has to be dealt with. It gets people talking.”

A veteran Philadelphia police officer who is African-American asked that his name not be used for this story. He felt Jenkins did have a right to express himself and no one had a right to judge him for his act. He feels there does need to be more dialogue when it comes to race relations and what people’s true opinions are.

“It’s twofold for me, being a black officer, as well as being a black man,” he said. “There are several levels of injustice going around. The public has a right to be angry or uneasy about the relations between the police and the public. Those of us who do it the right way, the actions of a few make it difficult for us who do it the right way in our official capacity without having to take people down off the roof—and explain for 15 minutes while we’re there.

“We have to undo a lot of wrong to even address why we are there. These are tense times, and look at it, it’s even carried into an Eagles game on a gorgeous Sunday afternoon. Time and time again, with questionable shootings that continue to rise, it makes it difficult. However people chose to express themselves, it’s on them. Sadly, we need more positive interaction. If I were in Jenkins position, I don’t know if I would raise my hand or I wouldn’t. Again, it’s difficult for me because I’m on both sides of the fence.”

Jason Horn, 39, from Central Pennsylvania, was at Lincoln Financial Field to watch the Eagles for the first time this season. Horn basically summed up what seemed to be on the mind of many on Sunday.

“I understand both sides and there are more important things to worry about than the reaction of a player,” Horn said. “I really don’t think anyone knows what to do or how to react, to be honest. It’s what Malcolm Jenkins feels that he needs to do, and some people would agree, and I’m sure some people here today don’t. It brings a good discussion, and hopefully, something good can from it.”