Eagles offensive line was outstanding in pass protection, in screenshots 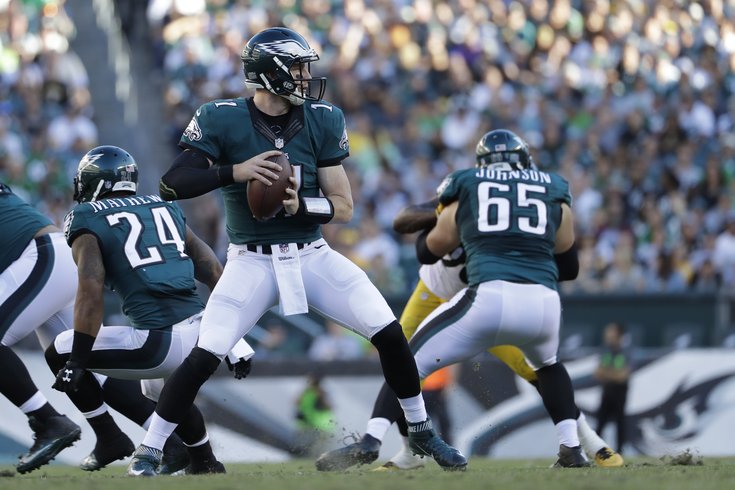 Quarterback Carson Wentz has been the story of the Philadelphia Eagles' season so far (maybe even the biggest story in the NFL), and deservedly so. What he has done in his first three games as a rookie is far beyond what anyone could have reasonably expected of him.

However, in the Week 3 game against the Pittsburgh Steelers, Wentz was right to point out that a big part of his success has been due to the play of his offensive line.

By my count, the Eagles called 23 traditional dropbacks in which the design of the play was for Wentz to throw downfield from the pocket. This would omit misdirection and bubble screens, which oh by the way, were blocked up nicely as well. Here are all 23 of those dropbacks, which show the kind of time and room Wentz had to throw. 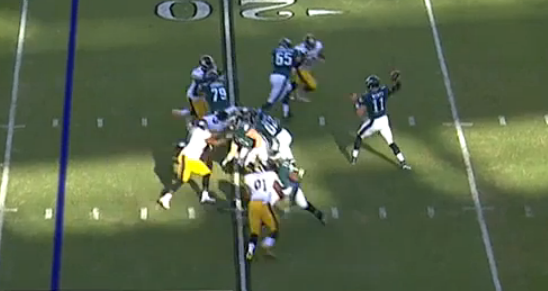 Wentz incomplete to Celek (throwaway out of the end zone), 2.4 seconds: 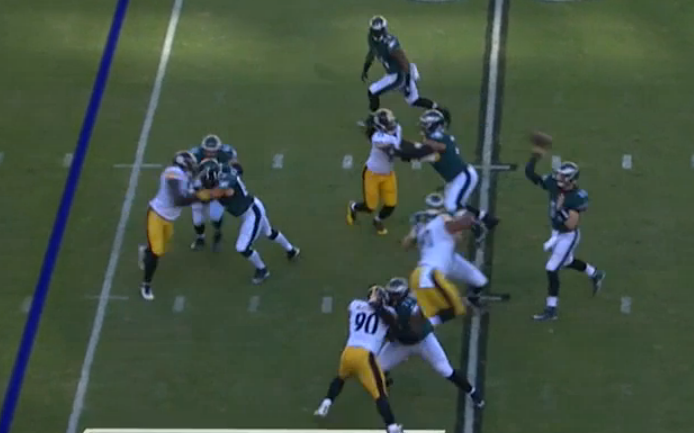 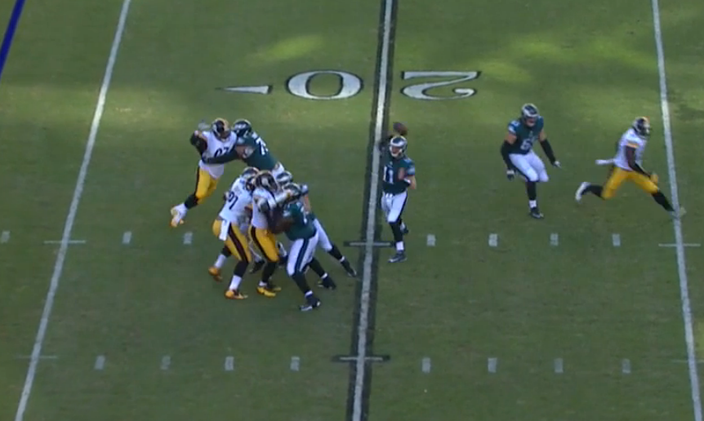 Wentz complete to Sproles after bad snap by Kelce, 2.9 seconds: 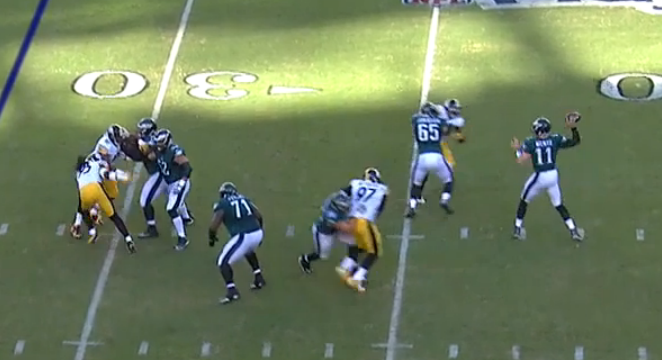 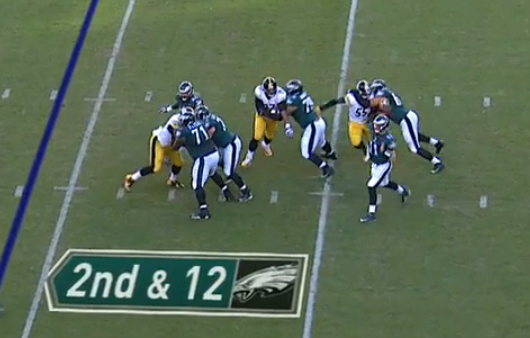 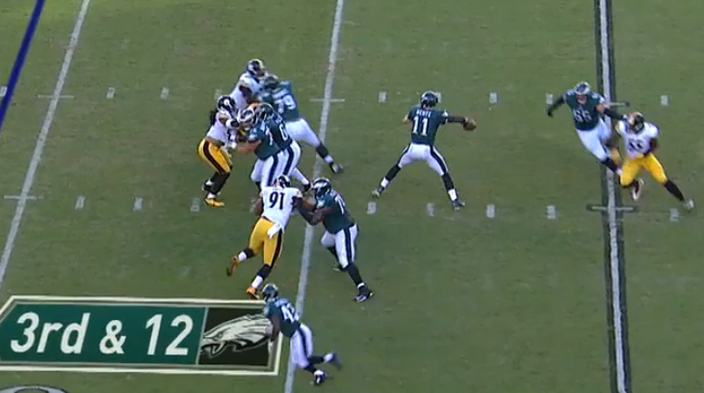 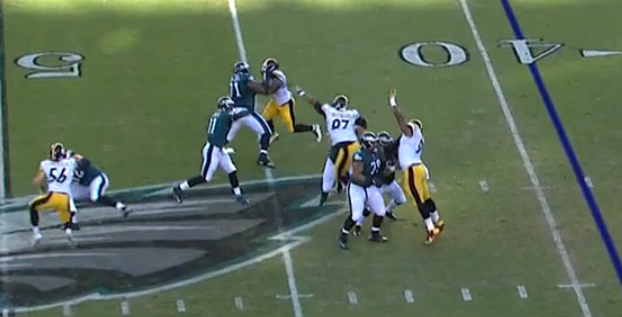 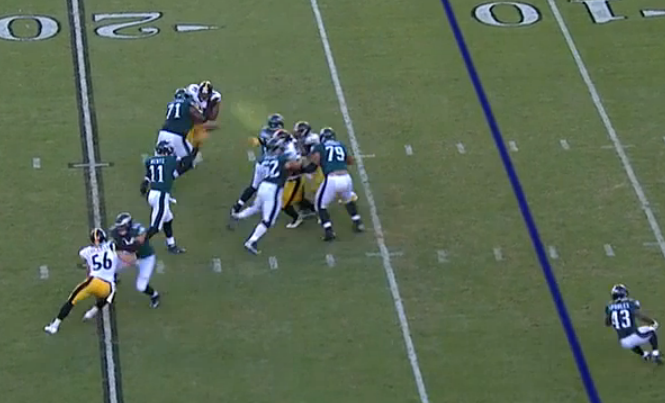 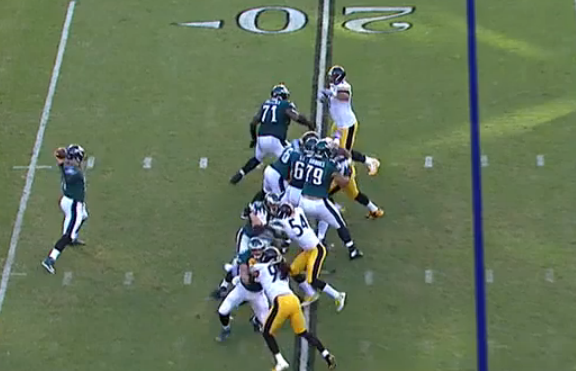 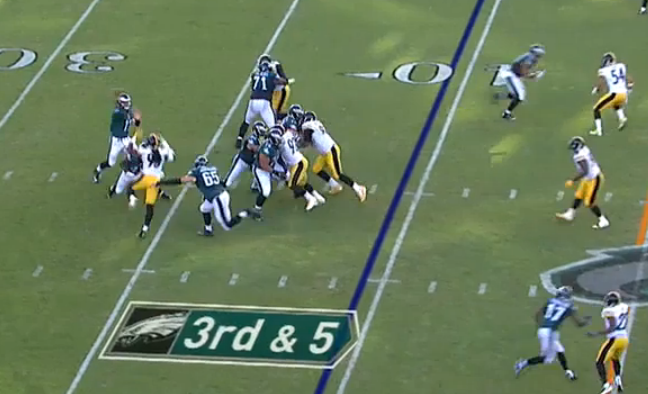 Wentz scrambles 10 yards for first down. On this play, James Harrison has a little bit of a step on LG Allen Barbre, and Wentz made the decision to run after about 2.2 seconds. He probably could have stood in the pocket longer, but there were absolutely no defenders on the right side of the field, so he tucked and ran: 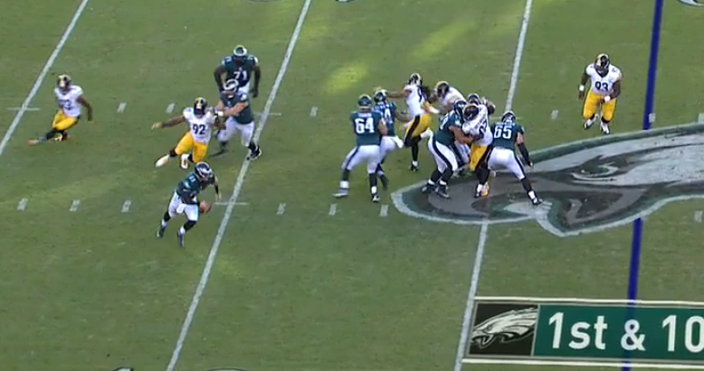 Wentz complete to Sproles in the flat, 2.3 seconds: 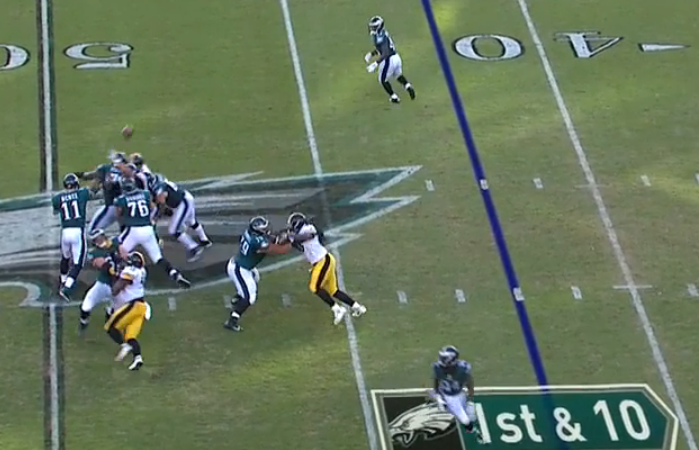 Wentz complete to Sproles on a checkdown, 3.3 seconds: 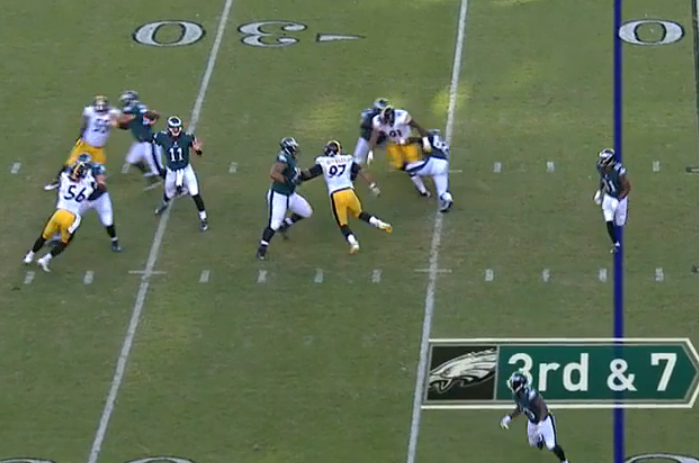 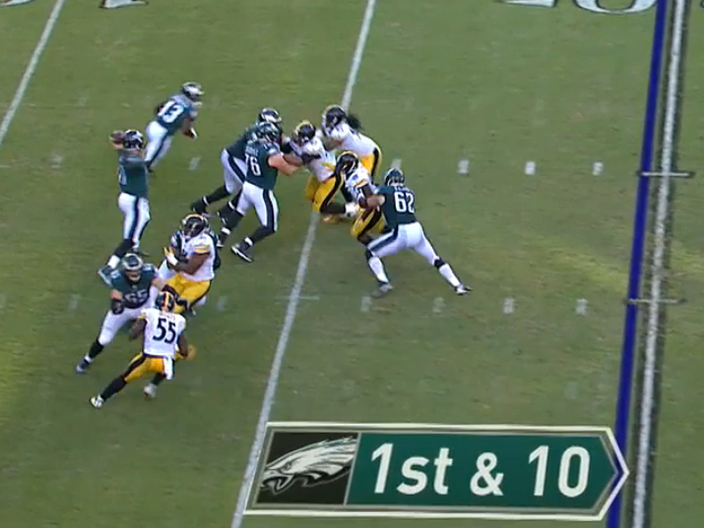 Wentz incomplete to Burton. Jason Peters attempted a cut block on James Harrison, which didn't get him on the ground. After getting around Peters, Harrison had a free run at Wentz, who got hit as he threw, juuuuust missing Burton for a big gain. 2.8 seconds: 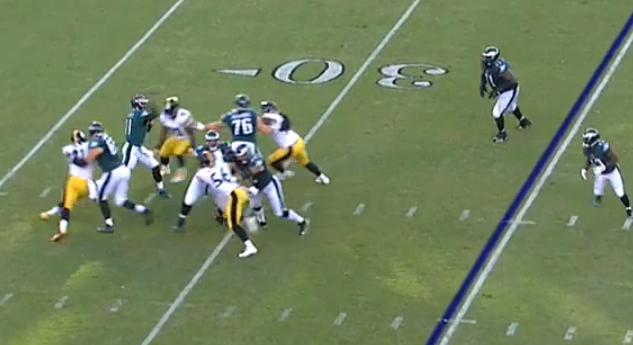 On the next play, Harrison got the edge on Peters and almost got to Wentz, although Wentz still had plenty of time to throw. 3.6 seconds: 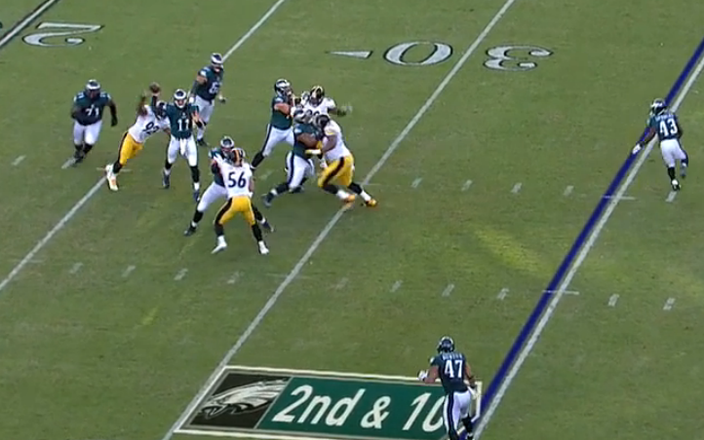 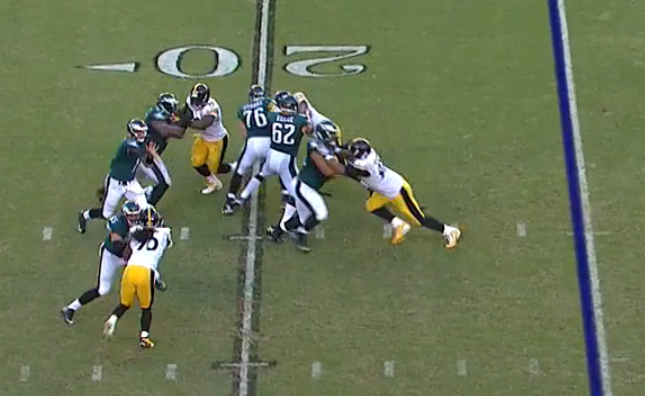 Wentz avoids a rusher who beat Allen Barbre after about 2.7 seconds, stepped away from the pressure, leaked out of the pocket, and hit Sproles on the biggest and most talked about play of the game. 5.5 seconds total. This one is probably worth a gif:

Wentz complete to Celek, 3.1 seconds, could have stood there for 3.1 more: 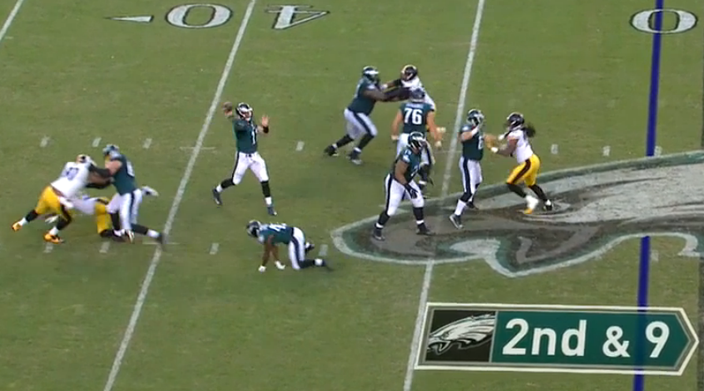 Wentz incomplete deep to Green-Beckham. Roughing the passer was called here as well. 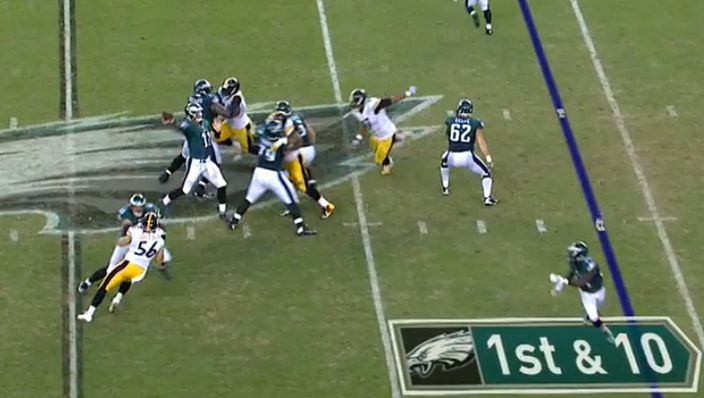 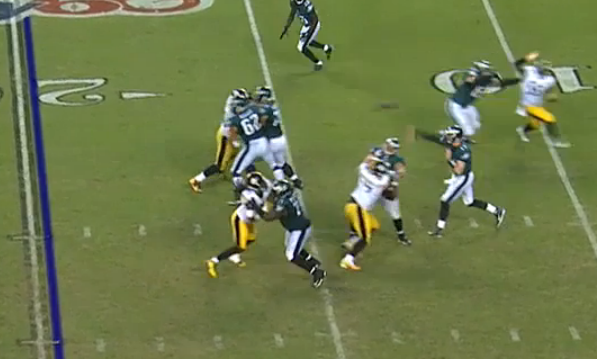 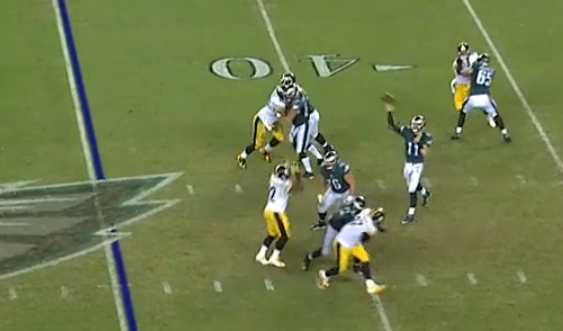 In 23 dropbacks, Wentz was touched three times (once illegally), and was flushed from the pocket without being touched twice. He was not sacked, and had all kind of time as well as room to throw.

This was sheer dominance by the Eagles' offensive line in pass protection.