LaVar Ball is a world-class fool in any language

The problem with never shutting your mouth is that over a long enough timeline, you’re eventually bound to say something regrettable. And, honestly, I can’t believe it’s taken LaVar Ball this long.

Sure, there was the whole “stay in your lane” thing. But does it really count when you can put those words on a t-shirt and sell them for $50 a pop? 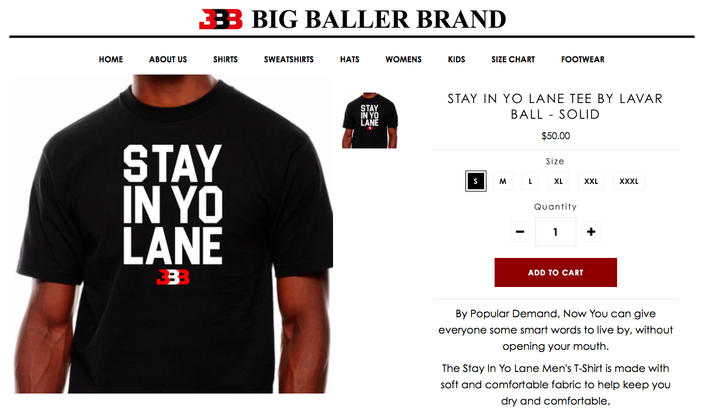 The dude is Teflon. Or at least he was.

On Friday, TMZ caught up with Ball, the father of Lakers guard Lonzo Ball, and asked him about his most recent feud, the one with Sixers center Joel Embiid. But before we get to that, a refresher on what's taken place so far:

•  On draft night, Embiid and Simmons took a shot at the head of the Ball family after Lonzo was taken second-overall by the Lakers and LaVar gave a very LaVar interview on ESPN.

Please dunk on him so hard that his daddy runs on the court to save him.. https://t.co/cMvt5RYiSQ

•  LaVar then fired back with the following during a recent interview on 97.5 The Fanatic:

“When you don’t win, and don’t even make the playoffs, and don’t even stay on the court long enough, that’s the best thing you can do – is tweet and make some stuff,” Ball said. “Ain’t nobody else doing that, because they’re working on their games in the gym. These guys ain’t played a game, [are] always hurt, and [are] at the bottom of the totem pole. So guess what? Get your [rear ends] off the goddamn Tweeter, and get in the gym.”  [philly.com]

•  That led to Embiid saying “F**k LaVar Ball” on Instagram.

And that brings us back to the present. So what did the face of Big Baller Brand have to say about Embiid's latest post?

That's about what one should expect from a feud like this, right? But as his words starting to sink in, something about what he said really pissed me off.

“The reason he said that ... his vocabulary is limited," LaVar told TMZ Sports. "You gotta use cuss words when you don't have no intellect."

"He's not intelligent at all. He's worried about me? He should be worrying about playing," LaVar said ... adding that Embiid has spent more time on the injury list than on the court.  [tmz.com]

First of all, LaVar, perhaps take a moment to look around and realize the world is slightly larger than whatever space you currently occupy. Then – and this may be difficult – remember that in other places, people speak other languages, and perhaps the reason Embiid’s vocabulary is limited has more to do with the fact that he’s only been speaking English for slightly over five years and it’s his third language – he also speaks fluent French and Bassa, the native language of Cameroon, his home country.

Maybe that’s why Embiid chose those three words. Maybe it was because it was the most effective and efficient way of telling you how he feels. Maybe he didn’t need to say anything else. But your response can only be taken one of two ways – and neither is a good look.

•  Option 1: You didn’t realize Embiid is from another country – I don’t know how that’s possible after listening to him speak for even one second – and your own ignorance led you to say something, to borrow a phrase, “not intelligent at all."

•  Option 2: You knew exactly what you were saying and decided to basically make fun of someone for being a foreigner and not speaking English as well as you (think you) do.

And, sure, I get it. I really do. It was mean of Embiid to say “F**k LaVar Ball.” But we’re all adults here. Hell, I get told the same thing multiple times a day by people I’ve never even met before. Most of the time, I don’t bother responding.

Maybe it's because my vocabulary is limited and I "don't have no intellect" – again, I'm borrowing a phrase here.

I guess that’s why I’m not a Big Baller.