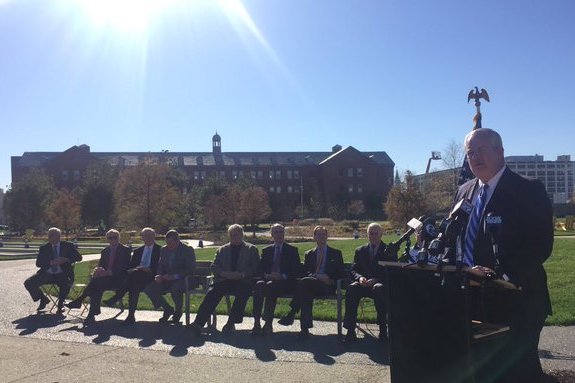 Congressman Bob Brady speaks in front of other local, state and federal lawmakers about extending SEPTA's Broad Street Line to the Navy Yard

A bipartisan coalition of Pennsylvania lawmakers came together at the Navy Yard on Monday to call for extending SEPTA's Broad Street Line into the developing area but offered little in terms of tangible developments.

Plan Philly reports that Monday's press conference was significant not because of any particular announcement, as all that was learned was federal funding had been secured for another feasibility study, but because of who showed up to voice their support. Per Plan Philly:

Measured in terms of actual progress on the extension project, today’s event was much ado about nothing: it was merely calling for a new feasibility study to replace one published in 2008. That study, which estimated the cost of extending the BSL to the Navy Yard at $370 million, has become outdated in light of the Navy Yard’s 2013 Master Plan and subsequent developments in the area.

However, in symbolic and political terms, today’s event was as you like it for supporters of the Navy Yard expansion. Senators Pat Toomey (R-PA) and Bob Casey (D-PA) spoke in support of the project, as did Rep. Bob Brady (D-PA-1) and Rep. Patrick Meehan (R-PA-7). They were joined by state Sen. John Rafferty (R-44) and state Rep. William Keller (D-184).

That collection of local, state and federal officials provided their endorsements for trying to get accessible  public transportation to the developing South Philly complex.

According to CBS Philly, Senators Toomey and Casey both suggested that the extension was necessary to keep the Navy Yard growing. Congressman Bob Brady was more brash.

"...for anyone who doesn’t think we need an expansion, stay around here until 4 or 430 and see how long it takes you to get out of here," Brady said, according to CBS.

He also said he'd only be back to the navy Yard "when I can ride a train from City Hall here," according to Philadelphia Magazine.

Despite those ripe set of circumstances, it will probably be a while before Brady can take his long awaited train ride. The new study isn't set to be completed until the end of 2016.