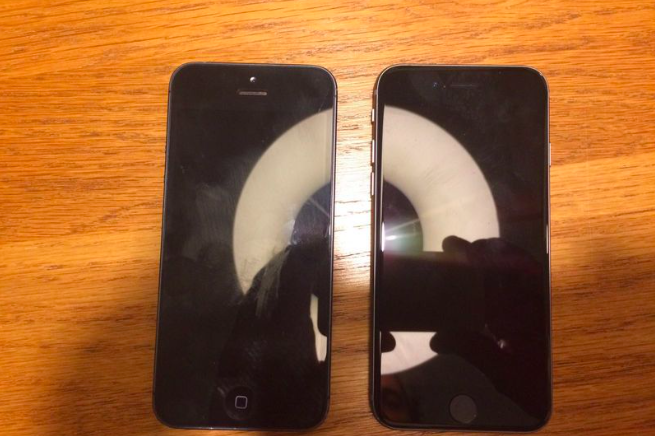 In a move that could give picky tech consumers an option to upgrade their iPhone 5S without transitioning to a bigger screen, Apple may soon launch a 4-inch "iPhone 5SE" that effectively imports the specs of the iPhone 6 into the smaller design and form factor of the iPhone 5S.

According to The Verge, an unglamorous photo that originally leaked via 9to5Mac could be the rumored 5SE, which may launch at an Apple event expected in late March or early April.

Placed next to an iPhone 5S, the device has the curved glass, side-mounted power button and volume button on both the iPhone 6 and iPhone 6S.

If the image is authentic, 9to5Mac says the iPhone 5SE would not have a 3D Touch display but would possess the Live Photos feature, activated with a long press to achieve the same result.

At the rumored Spring event, MacRumors reports Apple will likely debut the iPad Air 3 and new Apple Watch bands in addition the iPhone 5SE, which would replace the iPhone 5S entirely.

As 9to5Mac notes, the photo depicts an iPhone that still contains a headphone jack, which is rumored to be on the chopping block for the iPhone 7. That possibility has drawn a strong backlash from more than 290,000 users who have signed a petition opposing both the concept and the proliferation of e-waste that the switch would entail.

Other upgrades mentioned for the 5SE include an NFC chip for Apple Pay, Bluetooth 4.2, the Health app's Barometer for elevation tracking, and support for larger panoramas and autofocus for video recording.