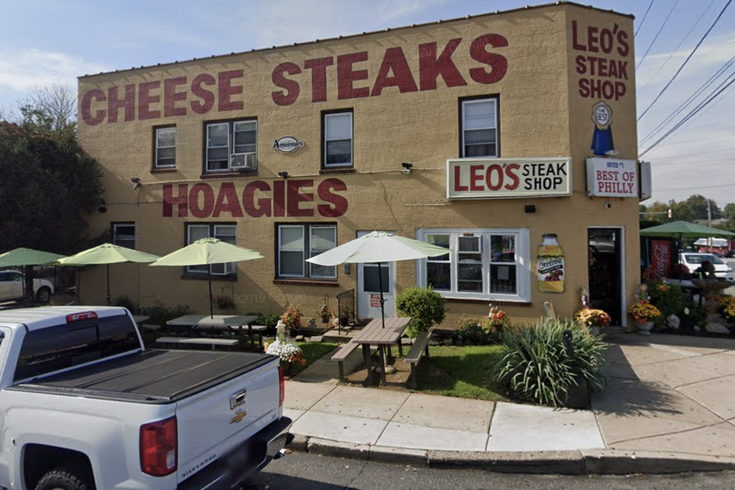 Leo's Steaks owner Steven Mullan was stabbed in the neck by an employee at the Folcroft, Delaware County cheesesteak shop on Friday, Aug. 20, 2021.

The owner of a Delaware County cheesesteak and hoagie shop is fortunate to be alive after a frightening attack at his business last Friday afternoon, when an employee stabbed him through the back of his neck with a 10-inch steak knife, according to authorities.

The incident happened at Leo's Steaks, a popular shop in Folcroft that's been around for decades at 1403 Chester Pike.

Owner Steven Mullan was stunned by the unexpected stabbing, which was captured on surveillance video inside the business around 2 p.m. on Aug. 20.

The video shows Mullan as he's ambushed from behind in an open doorframe. After a brief struggle with the employee, the knife is visibly lodged in Mullan's neck. Another employee can be seen fending the attacker off with a knife and then assisting Mullan to safety. (Warning: The video below contains graphic violence).

SURVEILLANCE: Stunning video of the attack. Leo’s Steaks owner Steve Mallen says the knife is removed. He only feels slight numbness on his face and soreness on his neck. Says he refused pain medication during the hours the knife was lodged inside @6abc pic.twitter.com/PrVNOjq8tf

After the stabbing, a Leo's employee was able to flag down a Sharon Hill police officer who was in the area around the time of the incident. When the officer entered the business, the employee who allegedly stabbed Mullan defied commands and was tased before he was placed in custody by assisting officers, said a criminal complaint provided by the Delaware County District Attorney's Office.

The employee was identified as 43-year-old Sean Walklett. He has been charged with attempted first-degree murder, aggravated assault with a deadly weapon and multiple other offenses, according to court documents.

An ambulance arrived at the shop within minutes of the attack and Mullan was taken to Crozer-Chester Medical Center, where a specialist was able to safely remove the knife. He was stitched up and has been recovering at home over the past several days, according to the Delaware County Daily Times.

Mullan told 6ABC he initially didn't feel the knife enter his neck. As time wore on and he waited for it to be removed, it became increasingly painful.

Folcroft Deputy Police Chief Chris Eisermen said he was shocked that Mullan survived, telling the Delco Times that the tip of the knife could be seen protruding from the front of Mullan's throat.

The circumstances of the stabbing remain under investigation, but Mullan said Walklett has struggled with mental health issues. Mullan hired Walklett about a year ago and rented an apartment to him at the same property on Chester Pike.

“I would think the last person he would want to stab and kill would be me, honestly,” Mullan told the Delco Times. “Whenever I spoke to him, I spoke to him in a mild manner, but for some reason, he decided he was taking me out that day.”

Walklett was arraigned Friday and bail was set at $950,000 ahead of a preliminary hearing on Sept. 14.