The suspect displayed a semi-automatic handgun inside the Republic Bank, at 16th and Market streets, authorities say 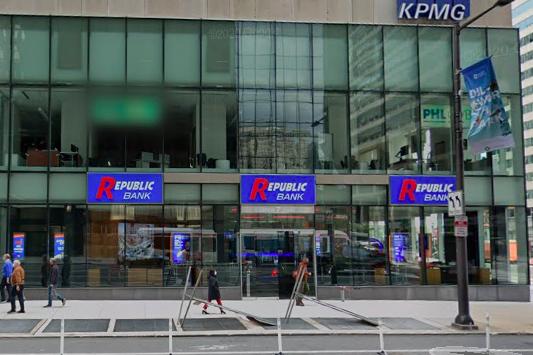 An armed man robbed the Republic Bank, at 16th and Market streets, in Philadelphia at 3 p.m. Sunday, the FBI says. Anyone with information about hthe man's whereabouts is asked to call (215) 418-4000.

Authorities in Philadelphia are offering a reward for information leading to the arrest of a man suspected of robbing a bank in Center City at gunpoint.

According to the FBI, the man entered the Republic Bank, at 16th and Market streets, just after 3 p.m. Sunday, displayed a semi-automatic handgun and told a teller he intended to rob the bank.

"After receiving an undisclosed amount of cash, the subject ordered the teller to lay on the ground with their hands on their head," authorities said. "He then fled the area of the bank on foot."

The amount of the award was not disclosed. It is being offered by the FBI and the Philadelphia police's Violent Crimes Task Force.

The FBI released photos of the suspect that were pulled from the bank's security system. In the photos, the man is wearing a gray T-shirt, white shorts, a black baseball cap and a black face mask. Authorities said he is considered "armed and dangerous."

Do you recognize this man? He robbed a Center City bank at gunpoint yesterday afternoon & the FBI/@PhillyPolice Violent Crimes Task Force is offering a reward for info leading to his capture. Call 215-418-4000 or go to https://t.co/M0Wg0RiRKf; tipsters can remain anonymous. pic.twitter.com/dpym5DlC91

Anyone with information about the man's whereabouts or the robbery at the Republic Bank is asked to call the FBI and Philadelphia police's Violent Crimes Task Force at (215) 418-4000.