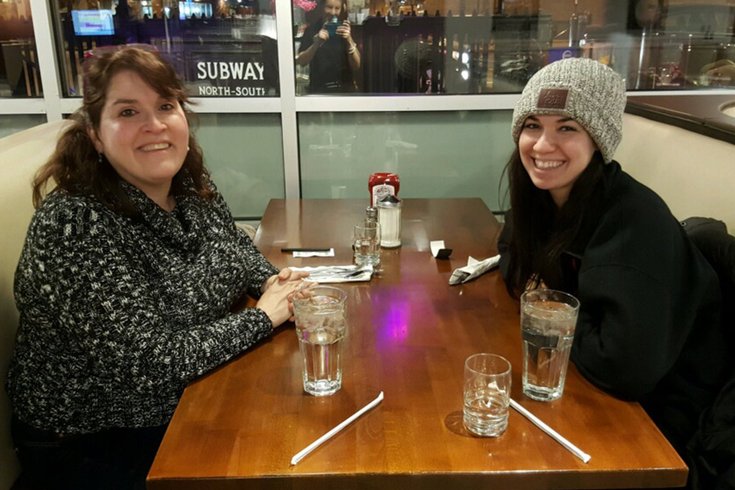 New Yorker Debbie Dusel, left came to Philadelphia for a two-day visit with her niece, Sarah, a Temple grad student, and became so enchanted with the city's love of the Eagles and its Super Bowl fever that she extended her stay – twice. Here they have a meal at City Diner on South Street, her first night in Philly.

In this business, the feedback we get is generally negative. Whatever. That's the nature of having a voice in these chirpy times.

Early Wednesday morning, though, I got an email in response to the column I wrote after celebrating the Eagles victory atop the Philadelphia Museum of Art steps.

That it was longer than the column itself was of interest to me.

That it was from a New Yorker visiting Philadelphia during the run-up to Super Bowl LII was even more interesting, so interesting, in fact, that I asked Debbie Dusel if she'd be OK with me sharing it with PhillyVoice readers.

She said yes, so with no further ado, read the words of a New Yorker who had a "life-changing experience" watching Philadelphians come together around the collective cause of seeing their football team end a 52-year championship drought.

To Philly, From Debbie Dusel

I want to share the life-changing experience I had this past week visiting Philly (was visiting purely by coincidence)! It was a once-in-a-lifetime week that I will simply never forget.

My niece, Sarah, is finishing up grad school at Temple University, hence, what was supposed to be a two-day visit.

The electricity in the air of your city, the pure joy, anticipation, and Super Bowl fever everywhere that I witnessed and heard was so big and so joyful to see. I ended up completely changing vacation plans and stayed six days! I am from New York and discovered how amazing your city is.

Just like many others, I visited the Franklin Institute in seventh grade, went to the Museum of Art two times over many years, and read the papers which did not exactly glorify Philly.

I saw the commercials for Philly and heard the mentions of websites VisitPA and GoPhilly, much like our "I Love New York." But, being from an amazing city already, I was not honestly driven to go there nor did I know many who had. I simply did not know how great it was there.

Well, what an expected and unbelievable surprise.

Between the architecture, history, arts available (that Symphony building, your Broadway-ish shows that come there after NY), the cleanliness (waaay better than NY), the feel of the whole town praying for a miracle and most importantly, the PEOPLE, this was one of the best and most amazing experiences of my life!

I met such great, great people and was deeply touched. So, a two-day stay turned into four which turned into six. I did not want to go home but had to because we have our traditional "Superb Owl" (a term I coined 10 years ago because my good friend is a "Night Owl").

The way the city looked with the flags running on light poles down Broad Street, the banners draped against historical buildings and even across the Franklin Institute and Museum of Art (which I could see far away during the Big Bus Trolley tour), the life-size player cutouts in City Hall's courtyard and the conversations overheard.

One man was saying to a co-worker as they walked ahead of me on Broad Street near City Hall that "right here, where we are walking, at this time in only a few days, HOPEFULLY we will be having a Ticker Tape parade." You could hear the disclaimer in the word "hopefully."

They were two grownups but so gleeful like little kids. It put a smile on my face.

I met three girls in the Acme market on South Street when I stopped in to see if I could bring home an Eagles balloon. That's when I saw the dog mask and asked "why are they selling that?" I learned about the Eagles being the Underdog (Got it!).

Debbie Dusel poses for a photo at City Hall. “The electricity in the air of your city, the pure joy, anticipation, and Super Bowl fever everywhere that I witnessed and heard was so big and so joyful to see,” she wrote.

No matter who you spoke to or who you overheard, people sounded good and confident.

Even though New York is a huge sports town, I am a big sports fan and I have just about seen everything by now, it was so deeply touching witnessing this unique time in your city's history and realizing how extremely important this all was, all seen with a New Yorker's eye.

I so cannot understand people who miss out on the pure enjoyment of sports. The strategy, the drama, the excitement. Hearing the fun stories on the local news.

One featured a video showing a plane full of Eagles fans heading to the big game. A passenger was asked by the flight attendant to tone it down about the Eagles. He was being a bit too exuberant. When the other passengers saw what was happening, some of them slowly broke out into song joining him until the whole plane was chanting the Eagles song together. The pure laughter you heard made me laugh and cry!

There was another news story I saw of a 15-year-old girl who had her wisdom teeth pulled and was knocked out. When she came to, she frantically thought she missed the Super Bowl and her beloved Eagles win. Even while still a bit out of it, she showed her deep love for the team. Well, the Eagles learned about her story and gave her and her dad two tickets to the game and they were flying out to Minnesota.

All of this really hit you, even if you were a semi-jaded New Yorker.

As an avid sports fan, I so understand your description of the agony of wanting that championship sooo badly. That's how it was as a kid waiting for those Mets that I watched from 1974 (Tug McGraw pumping his fist into his mitt) through their finally winning in 1986.

To this day, it is one of the highlights of my whole life, just as you said. It means everything, you never ever forget it. It is pure joy.

After driving back to NY this past Sunday, and having shared all of the above with my friends during the whole week preceding the game, all of us were praying for your miracle.

Yes, there are those that dislike Boston just being New Yorkers, but it was not about that at all. This was about wanting this so badly for all of you!

It was very hard watching that game, just a nail biter. I kept thinking of what this means to the great people I had met and exchanged cell phone and email addresses with to keep in touch (something you normally do not do).

My new "friends" made in Philly (the Concierge Annie, the Janitor James, the Big Bus Tour Guide, Will), we texted before the game: "Let's do this" and "We've got this" with our fingers crossed.

The nervous texts during the game (uh oh) and that long wait during the official call.

You never feel safe with Brady, there can be 10 seconds left and he CAN turn it around. Everyone feels the same way.

And then finally the miracle happened and they WON! They really did it!!! We could not even imagine (well I can based on 1986 and other big wins since) how you all felt.

You did it and we all will be thinking of you Thursday during your parade.

My niece cannot believe her pure good luck to have been there during this amazing time in Philly history (she's a huge sports fan like her Aunt). We will be trying to see any coverage we can on TV an YouTube here in New Yawk. And I will be texting.

I jokingly told my husband and friends, "I think I am on to something here. Going forward maybe we should make our vacation in the city that is one of the two contenders for the Super Bowl championship.

There is nothing better than seeing the electrified atmosphere and hopefulness of the fans. You all waited so so long. It means everything and is well deserved!! (Brady is Human?)

PHILLY, we will be back many times and I am spreading the word about how amazing you are!!! Enjoy that parade!