Pa. has the second-highest rate of reported outbreaks

Contaminated chopped romaine lettuce has caused a growing E. coli outbreak across the United States in the past three months, with five inflicted people reported dead and almost 200 people sick.

The first reported case was March 13, when the Centers for Disease Control and Prevention linked the outbreak to a strain of romaine lettuce. Since then, reported afflictions have spread to 35 states as of May 30, 2018 -- up from the 16 states reported just a few weeks prior, on April 18.

Leading with the most outbreaks is California, with a reported 45 cases. Pennsylvania continues to have a disproportionately high count of E. coli cases as well, at 24. New Jersey has eight reported cases. Most other states represented have reports in the single digits. 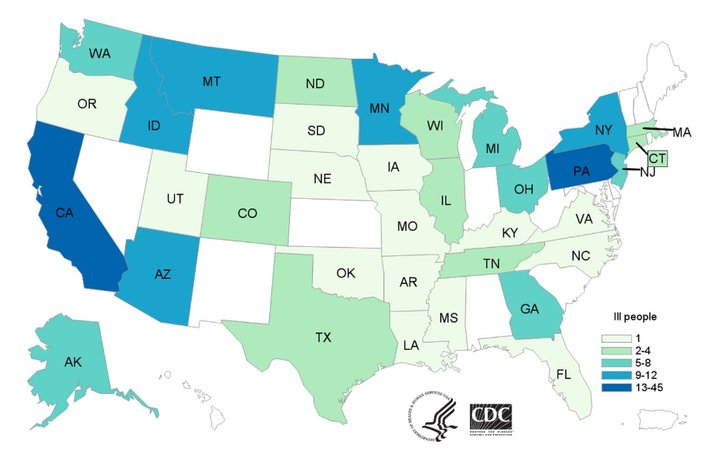 As the outbreak grows, the case is still a relative mystery to investigators. It was previously determined the E. coli came from contaminated romaine lettuce grown in the Yuma region of Arizona, not far from the Southern California border. However, the Food and Drug Administration has still not linked the outbreak to any one farm, processor, or distributor.

The CDC reported 197 people have been fallen ill from the case, about half of which have been hospitalized.

“It’s a labor-intensive task,” said the FDA in a recent statement.

“It requires collecting and evaluating thousands of records; and trying to accurately reproduce how the contaminated lettuce moved through the food supply chain to grocery stores, restaurants and other locations where it was sold or served to the consumers who became ill.”

Though the FDA originally said the risk was only in bagged and pre-chopped romaine lettuce, the risk may be more pervasive than originally thought. This was the case when an entire prison in Alaska recently fell ill after inmates were fed whole-head lettuce.

A similar outbreak occurred in 2006 when 205 people got sick and five died after contracting E. coli from baby spinach.

Symptoms of E. coli include diarrhea, vomiting, and severe stomach cramps. Catch up on our previous coverage of the E. coli outbreak here.