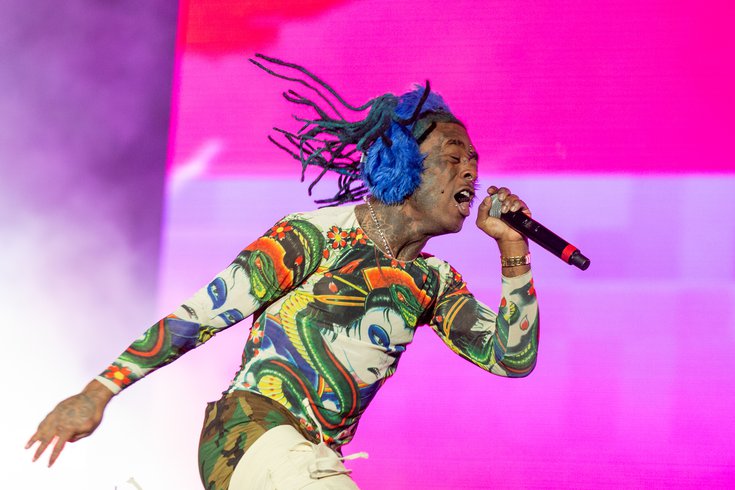 Lil Uzi Vert performs during the Day N Vegas Music Festival on November 14, 2021. The Philadelphia-born rapper said the infamous pink diamond he wore in his forehead came under the scrutiny of his life insurance company.

Lil Uzi Vert raised eyebrows earlier this year when he seemingly had a pink diamond embedded in his forehead, one of the more creative stunts of decadent fortune a rapper has displayed in recent memory.

The only thing more shocking than the placement of the precious gemstone was the $24 million price tag that came with it. The Philadelphia-born rapper tweeted that he purchased the diamond in 2017 and that he was still paying it off several years later.

To top things off, Uzi said the diamond was ripped out of his forehead by fans during a summer concert performance at Rolling Loud Miami 2021.

"I had a show at Rolling Loud and I jumped into the crowd and they kind of ripped it out," the 26-year-old told TMZ. "I still have the diamond so I feel good."

Since that incident, Uzi has not been wearing the diamond in his forehead.

Many fans assumed that the diamond had actually been implanted directly into Uzi's forehead. In fact, it was attached to a back stud piercing in his forehead, but his life insurance company didn't know this. They thought the rapper had a death wish.

During an appearance this week on the "Scuffed" podcast by Twitch streamer Trainwreck, Lil Uzi Vert explained that the heaviness of the diamond sometimes caused irritation at the site of the piercing and he had to remove it in order to let the area heal. His insurance company assumed the worst about the diamond.

"I had to really get my s*** together,” Uzi said on the podcast. “My insurance tried to cut me off, they were like, ‘This kid’s trying to kill himself.’ … Because we knew it was a piercing, my insurance looked at it like, ‘This kid just implanted this diamond in his head, and he’s gonna die.’ ... I really had to call the piercing person and show them low-key … it’s literally a piercing.”

Lil Uzi Vert most recently released a single in October, "Demon High," and is still working on a follow-up to his 2020 album "Eternal Atake."