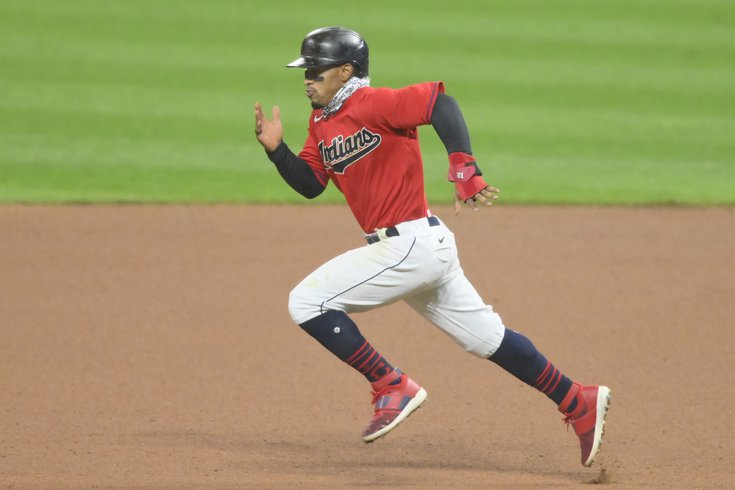 Francisco Lindor will reportedly be traded from Cleveland this offseason.

MLB free agency continues, and the Phillies need a plan at shortstop.

The team doest not currently have a shortstop on the MLB roster, as Didi Gregorius has become an unrestricted free agent last week.

Philly has a handful of options, three of which we'll explore right here.

The simplest of these available options is to put Scott Kingery or Jean Segura there, with Alex Bohm at third.

This would not upgrade the offense — but would eventually create an opening for prospect Bryson Stott, a first round infielder the Phillies have high hopes for (but who is not expected to make the leap to the majors in 2021).

It would also take away some of the depth the Phillies had available to them last season, when they were able to shuffle Kingery, Segura, Gregorius, Bohm and first baseman Rhys Hoskins around with essentially five starters at four positions. It also gave them superior options at the DH (it's unclear as of now if the NL DH will return in 2021, but it probably will).

With no prospects ready to make the leap yet, someone like journeyman Ronald Torreyes or Phil Gosselin could be called on to contribute as a starter in the infield as well.

Or they could bring someone in.

The Phillies could go the free agent path, one they are accustomed to taking in recent years. Among those available are former Brave and Angel Andrelton Simmons and former Phillie Freddy Galvis, both 31 years old. Depending on how much the Phillies are comfortable spending, there are different shortstops for different budgets available.

The estimated value is from Spotrac.com, and those numbers don't necessarily mean that's what the player will net in free agency, but what their career numbers and likely future production warrant. Which would you rather have?

The obvious answer seems to be Gregorius, but after making $14 million last year, he'll likely be seeking close to the same, potentially on another one-year deal with the uncertainty about the market surrounding COVID. But of course, will the Phillies be willing to spend eight figures on a shortstop when they need to spend close to twice as much to retain the top catcher in the game in J.T. Realmuto (while also addressing pitching and outfield issues)?

And, if they are willing to dish out $14 million or more, the team could throw in a prospect or two and take a big swing in the trade market.

According to a report Thursday from MLB insider Bob Nightengale, the Indians are shopping their star shortstop Francisco Lindor.

Cleveland, strapped for money, intend to trade All-Star shortstop Francisco Lindor by opening day, several rival teams have been informed. Lindor earned $17.5 million last season and is projected to earn about $21 million in salary arbitration in his final year before free agency

If Cleveland is committed to trading him, the Phillies should absolutely be interested. Lindor is 26, four years younger than the youngest top free agent in Semien. He has been a four-time All-Star and has gotten MVP votes in three straight years. And he is under team control for two more seasons at a rate that is beyond reasonable for his production.

From 2017-2019, Lindor hit 32 or more homers each season, and is a career .285 hitter. The Phillies may not have much MLB-ready talent in the minors right now, but they could theoretically piece together a package to entice the Indians (lets say, Mickey Moniak and Adonis Medina). It would be hard for Philadelphia to justify the trade they made for Realmuto, sending Sixto Sanchez — their top pitching prospect — to the Marlins, and not also be willing to trade a prospect away for Lindor, who is among the top at his position and in his early prime. This is the path toward real contention for the Phillies.

It's a big swing, but it could be a perfect move for Philly, and one that would create a pretty potent Bohm-Lindor-Segura/Kingery-Hoskins infield that would be quite effective, while also giving them a DH option every day.