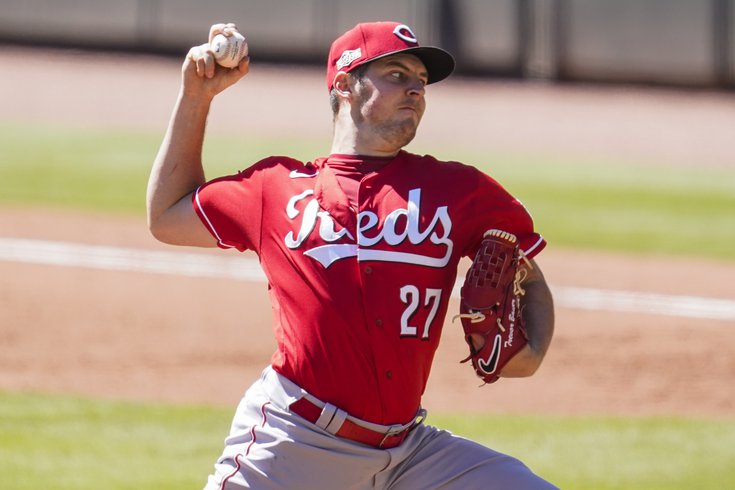 In the molasses slow-moving world of MLB free agency, the Phillies have a lot of tough decisions to make as J.T Realmuto considers his options (and his qualifying offer) as one of the top 2 or 3 free agents in all the land.

However, a little news came from another top available player, as the best starting pitcher on the market right now, Trevor Bauer, rejected the qualifying offer that came from his previous employer in Cincinnati. Ignoring for a second the obvious disincentive — that a rejected qualifying offer brings with it the loss of a draft pick for any interested team — there has to be interest from the Phillies right?

After all, beyond their two aces in Zach Wheeler and Aaron Nola, there isn't much depth or reliability from their rotation. With Jake Arrieta set to be off the books, the Phillies could essentially use that money to try and nail down Bauer, who is younger than Arrieta when he first signed at 29 years old.

Bauer made 11 starts in the shortened 2020 season and was absolutely dazzling, going 5-2 with a 1.73 ERA, including two complete game shutouts. He is favored to win this year's Cy Young award. That stint was an anomaly, however, as his career numbers are a more modest 75-64 with a 3.90 ERA. Still, he's trending the right way and has a similar career record to Wheeler, who signed for $118 million last offseason.

Reports suggest that he is still open to a return to the Reds but is eyeing a big market team like, you guessed it, the Yankees or Mets. Reporting from the New York Post suggests that many expect Bauer to be one of the first offseason dominoes to fall, setting the market during this awkward and unusual COVID offseason.

Over at PhilliesNation, Destiny Lugaro seems firmly against the addition of Bauer, citing his off the field issues (like harassing a woman online) and drama with some teammates in previous seasons. But that's not the only reason. The team is expected to have limited funds to spend in 2021 and should focus them on Realmuto and other spots.

While the Phillies don’t have a need at the top of the rotation, they do have a vacancy at the back end. Arrieta is a free agent and the team could move on from Vince Velasquez, who is in his final year of arbitration eligibility. The Phillies should fill that vacancy with either a low-cost option in free agency or a prospect that is on the verge of graduating to the big leagues full-time. Adonis Medina would be the most likely internal option.

If anything, the Phillies should actively try to make their team less top-heavy. That means taking a dive into the deep end of the free-agent pool, which is expected to be flooded with mid-tier free agents who were cut from their respective teams for budgetary purposes.

It would behoove the Phillies to build up pitching depth as opposed to allocating resources for a top starting pitcher. Pitcher injuries skyrocketed at the beginning of the 2020 season due to the short spring training and teams should prepare for the same to happen in 2021. Arms that are normally built up to throw 200 innings only threw around 70-80 innings. A lack of equilibrium in ’21 and beyond as well the fact that pitchers need to build back up to their normal workload could be a dangerous trend for pitchers, particularly starters, for years to come. [PhilliesNation.com]

Of course, it always comes back to Realmuto. And also, of course, that perhaps having better depth at the end of their collapse in September may have allowed them to curb their implosion and make the playoffs for the first time in nine years.