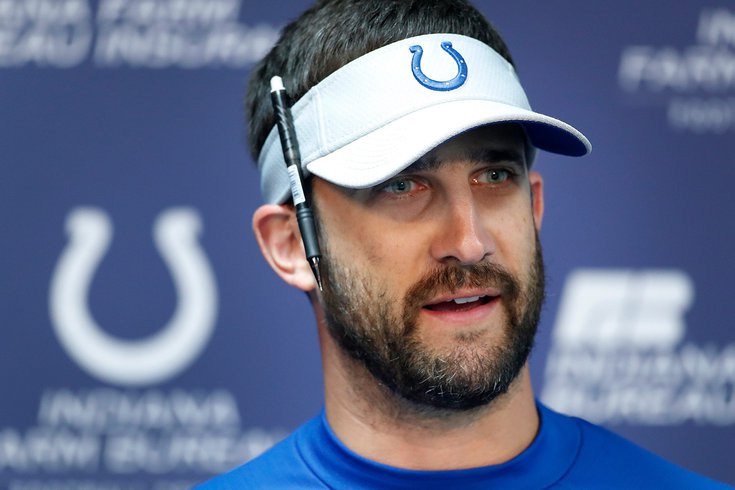 At noon on Friday, the Eagles will introduce new head coach Nick Sirianni, who will take the helm following the somewhat surprising dismissal of Doug Pederson earlier this month.

MORE ON SIRIANNI: McMullen: Ordinary Eagles follow the leader with Sirianni hiring | Thumbs up/thumbs down on Eagles' decision to hire Sirianni | What they're saying about hire Nick Sirianni | Three questions Nick Sirianni will need to answer

There will certainly be a lot to discuss, from the team's quarterback situation to Sirianni's football philosophy and from the building of his support staff to whether or not he'll be calling the plays on offense. And, of course, being that this is an introductory press conference in Philly, there's also certainly going to be a question or two that's totally unexpected.

On Friday morning, prior to his introduction to the media, Sirianni did a one-on-one-interview with Eagles insider Dave Spadaro. The new coach, who also confirmed that he would be calling plays in 2021, was asked about the idea of having two quarterbacks competing for the starting job.

"You look at a lot of rosters and they don't have any quarterbacks, right, that they feel really good about. We have two. That's unbelievable to have two quarterbacks who have played and that have played well," he said. "I couldn't have watched more tape on Carson Wentz in 2018. When Frank and I got back together, when we were installing our offense with the Indianapolis Colts, we watched a lot of Chargers tape, and we watched a lot of Philadelphia Eagles tape from 2017. Man, what an impressive player. He's got so much talent, and from what I've heard from everybody, great person. Good talent, good person, it takes your game to really high levels. So excited.

"Jalen got his snaps last year and was able to play last year and he played good football in meaningful games. Not a lot of people have that luxury of having two quarterbacks that have experience, so super excited to be able to work with them because, obviously, we all know how important that position is to a football team."

We'll have you covered with a live stream of the press conference, as well as instant reactions from the Eagles beat writers and other members of the Philly media. And, as always, feel free to discuss Sirianni's answers yourselves in the comments section below.

It's sure to be an interesting one...


This content and the links provided are sponsored by thelines.com and playpennsylvania.com, PhillyVoice.com’s Official 2020/2021 Betting Odds Partner, independently created by PhillyVoice.