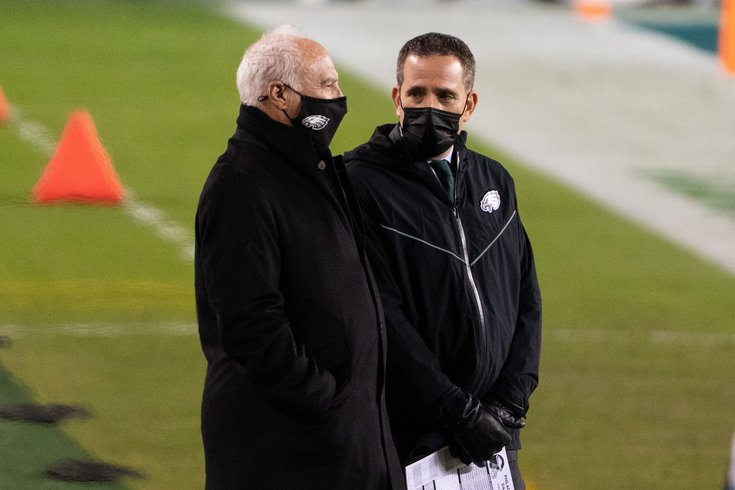 The Eagles rest comfortably, understanding that a wide-ranging search spawned by irreconcilable differences between Jeffrey Lurie and Doug Pederson over the children (in this case Press Taylor) led them to the best option under difficult circumstances, the 39-year-old Nick Sirianni.

History says you can't judge any head-coaching hire at the moment — with Pederson himself perhaps the best example of that in recent NFL lore.s

Almost universally panned as the worst choice in the 2016 hiring cycle, the only judge that matters, hindsight, reveals the former Eagles coach was easily the best, making the postseason three times with Philadelphia and leading the organization to its only Lombardi Trophy with the Super Bowl LII win over New England.

Philadelphia, however, settled for Pederson only after the now two-time failure Adam Gase went all Josh McDaniels on them and Ben McAdoo did the 180 on the Jersey Turnpike presumably at the Molly Pitcher Service Area.

So take the poor grades for the Sirianni hiring like Mike Lombardi’s McDaniels-tainted take and all the 'he’s Vince Lombardi reincarnated with the higher stubble ceiling' from those who spend their days carrying water for the Eagles organization and place them in the same circular file.

None of them matter.

No one can possibly know if Sirianni is a good hire or not.

What we do know is the odds are against any rookie head coach.

Not only is winning difficult in the NFL for any first-timer, but Sirianni also comes in during a "transition" period [since the word rebuild has been banned by Lurie] with a quarterback controversy, significant salary-cap issues at least in the short-term, along with a host of personnel issues that must be solved by Howie Roseman and Andy Weidl.

More so, a seemingly tone-deaf owner navigates the Rooney Rule like a bull browsing at the local china shop under the assumption lip service obfuscates two decades of inaction like a magic invisibility cloak, even though so many in his own locker room lobbied and endorsed the popular Duce Staley, who is so fed up with the dangling carrot being moved so often he's finally asked out.

That sets up Sirianni and his painfully predictable coordinator choices as mid-30s former Abercrombie & Fitch models who fit the suit to many in a league that is 69 percent African-American but somehow has only two black head coaches.

And oh yeah, Lurie himself has also developed a nasty little scapegoating habit that means someone is getting blamed for any perceived underachievement no matter the context.

Enjoy the honeymoon, Nick. The second-guessing starts shortly after the introductory press conference this week.

The only judgment from here is just how ordinary this search was.

As a whole, the NFL is hardly a forward-thinking entity, far more reactive than proactive and all coaching excursions generally go by the book, something evidenced by the reaction so many aimed at Josh McCown getting a look in Houston in what would be a head coach coming straight off the playing field.

Even if you get past the Rooney Rule stuff with McCown and the ignorant claims of privilege (name another QB of any race being tabbed as a ready-made coach), you had 1,001 wannabe coaches screaming unfair with the tortured 'give him a quality-control job and see what he's got' sentiment.

As if 18 years in the NFL and $50 million-or-so in the bank doesn't change the game as opposed to, say, being a grad assistant or learning how to use the Keurig machine as the QC guy.

In other words, if you're like the Jets', Eagles' or Texans' executives who believed McCown is going to be a successful future head coach, you better change the conventional thinking or be prepared to lose the candidate.

Until someone makes that kind of leap, everyone must jump through the same hoops.

So much so that coaching is now a lot like the mafia — instead of pricking the finger en route to omerta, you get the standard book of cliches to help keep your mouth shut when it comes to a closed world where EVERYONE thinks the same.

Take the Eagles — they started with the same list everyone else did, just eight days late, and all their data and due diligence led them straight to a painfully predictable rock being uncovered.

It's confirmation bias turned up to 11 on the Spinal Tap speakers, buried in busy work to obscure the obvious.

There are no new ideas here — no innovative thinking. This was Andy Reid being pissed at the Eagles because of the way they treated Pederson and shielding Mike Kafka so let's call Frank Reich and see what he thinks because we can’t trust the loose cannon in McDaniels.

And it might even work for a while, but don't pretend it was anything other than it was — a terribly ordinary hire.