John McMullen: Slow burn of Eagles coaching search has them under even more scrutiny

So far, no Black head coaches have been hired this cycle — and just two of the initial seven openings remain 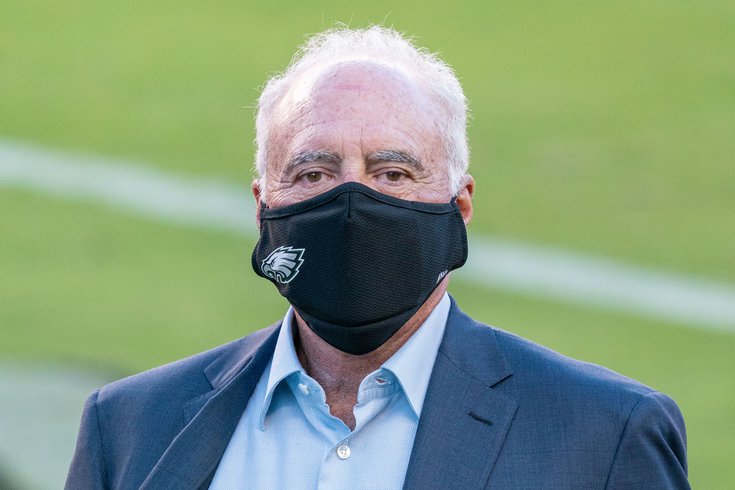 There were seven coaching vacancies in the NFL during the 2021 hiring cycle and just two are left to be filled by a pair of four-win teams: the Philadelphia Eagles and the Houston Texans, organizations that, whether they know it or not, are under a higher-powered microscope in a league that too often pays lip service and little else to its minority-hiring practices.

Of the five openings filled, so far only one is a so-called Rooney Rule candidate, New York Jets mentor Robert Saleh, who is of Lebanese descent.

We could dance around the obvious or speak honestly and earnestly about the problem. In a league that is two-thirds African American, there are currently only two Black head coaches — Mike Tomlin of the Pittsburgh Steelers and Miami's Brian Flores — with one fired in advance of this cycle, former LA Chargers coach Anthony Lynn.

Jacksonville, Tennessee, the Chargers, and Detroit went traditional routes in this cycle: the program builder [Urban Meyer], the flavor of the month who happens to be the son of a billionaire [Arthur Smith], the guy who looks like and [insert audible gasp] even knows Sean McVay [Brandon Staley], and finally, the stereotypical football guy who just might actually put a few nails into his morning cereal just to test his own toughness [Dan Campbell].

All are white, of course.

Eric Bieniemy? Well, the next in line for the Andy Reid-tree coronation remains next in line with those on Park Avenue likely crossing their fingers that Deshaun Watson can get over his dislike of the Houston front office and encourage the Texans to bite, despite the Kansas City offensive coordinator’s "skeletons" from Colorado or his bad-interview style.

Business in the NFL, as they say, is business as usual.

To NFL owners, diversity might as well be that old, old wooden ship that was used during the Civil War era.

Jeffrey Lurie, he of the one minority hiring a quarter-century ago when it comes to head coaches or coordinator positions in Philadelphia, is actually regarded as one of the most progressive of the league's owners, at least from a political bent.

But modern American politics is all about empty gestures in the hope the absence of demonstrable action isn’t noticed. It's about feeling good. Doing actual good is always optional and a distant second to likes or favorites on social-media platforms.

The Eagles to date have interviewed four minority candidates in a wide-ranging search — Saleh, New England inside linebackers coach Jerod Mayo, Tampa Bay defensive coordinator Todd Bowles, who was once the interim DC in Philly but not actually hired to perform that job in a traditional fashion, and usual in-house stand-by Duce Staley, an obvious interview Lurie foreshadowed from the start.

"I would expect Duce Staley to be a candidate. He's a great representative of the Eagles and knows our values. I would expect him to be part of the search, as well," Lurie said.

The ramped-up Rooney Rule of interviewing two outside minority candidates has been satisfied by the Eagles and Lurie can hire a coach whenever he likes at this stage.

If you believe the tea leaves, and Bieniemy's camp certainly does, Josh McDaniels, the retread "schematic genius," is the guy despite baggage that might make Kenan Thompson blush.

“We’re really trying to find out what the standard is, and every year the standard changes. We’re just trying to swim against the current," Bieniemy’s agent, Brian Levy, told Yahoo! Sports in 2020.

This year, the frustration was even more palpable on Martin Luther King Day.

On MLK Day...the @NFL should be ashamed that...at this point with only 2 jobs remaining (one after Eagles hire JM) ... zero black coach hires or even 2nd interviews. No coaches coaching in conference championship games are currently connected to either of these 2 jobs.

While that's unfair as the Eagles were literally interviewing Bowles at the time of the message, according to an NFL source, the perception here is going to overwhelm reality.

Personally, I have no doubt Lurie truly believes he's looking only for the best candidate.

"If we find a head coach soon or it's early February, it's totally great," Lurie said. "If we're the last team picking a head coach, that's great, too, because then you have all the opportunity in the world. There's no rush. There's no pressure."

Maybe when the Eagles search started that was even true. Now it's time to think again.

“Thus far, the NFL hiring cycle of 2021 has not changed the rate of hires for Blacks as Head Coaches and primary football executives,” Fritz Pollard Alliance executive director Rod Graves said in a statement Tuesday. “This follows the 2020 Racial and Gender Report Card issued by The Institute for Diversity and Ethics in Sport (Dr. Richard Lapchick), which gives the NFL failing (or near failing) grades in racial hiring for leadership positions. People of color represent sixty-nine percent (69%) of the players and thirty-five percent (35%) of assistant coaches. In contrast, the NFL has one president, three general managers, and three head coaches [two after the Lynn firing] who are Black.”

Graves called the disparity of opportunities for African-Americans in the NFL “'mind-boggling."

Meanwhile, Lurie is getting text messages from his own players and ex-players to hire the well-regarded Staley, Duce not the Chargers' Beverly Hills 90210 replicant.

"It is unfortunate that the performances of coordinators like Eric Bieniemy, Todd Bowles, Byron Leftwich, Leslie Frazier, and Joe Woods, may not meet what appears as ‘ever-evolving standards’ for becoming a Black Head Coach in the NFL," Graves said.

The optics of the Eagles search are what they are as it marches on from Billionaire's Row on Palm Beach Island. Maybe McDaniels is paired with Mayo, the 34-year-old who got his first interview in Philadelphia and will be put on a faster track before the next owner comes up with the next condition.

Or maybe the pressure lands and shifts toward the safety net in Staley. Many in the league were convinced that McDaniels was buttoned-up by Monday. Even one team source who should have been in the know was convinced Josh was a done deal, so something is going on.

"There's nothing that should drive you from a decision based on just rational thought and careful analysis and getting to know the person as best you can," Lurie claimed.

Deep in the candy-cane forest next to the gum-drop river, sober logic like that reigns supreme.

In 2021 America, however, privilege is the word hijacked by charlatans to divide us while the real issue of class marches on unabated and largely unnoticed.